Will Smith attempts to put the fiasco that was After Earth behind him by rediscovering his comic timing for a light and breezy conman caper. 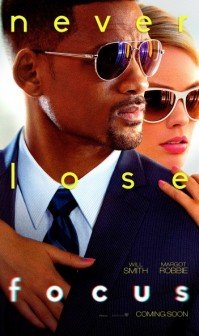 Nicky Spurgeon (Smith) is a third generation con-man. When we first meet him he’s eating in a fancy restaurant which was booked out, until they discovered he’s a famous chef. He’s not. Nicky has a meet-cute rescuing Jess (Margot Robbie) from an amorous drunk at the bar, and soon he’s teaching her the tricks of the trade.

New Orleans hosting the Superbowl is Sucker Central, where Jess is introduced to the extended gang of con artists, led by co-ordinator Horst (Person of Interest’s FBI menace Brennan Brown) and computer whizz Farhad (Adrian Martinez). The gang make a $1.2 million killing, which Nicky immediately puts in jeopardy by getting into a VIP box gambling spree with high roller Liyuan (BD Wong).

But that’s nothing compared to the jeopardy a chastened Nicky gets himself into three years later working for Rodrigo Santoro’s unscrupulous F1 team owner Garriga in Buenos Aires. Against the strenuous objections of right-hand man Owens (Gerald McRaney), Garriga hires Nicky to sell a fake patented race-winning electronic device to rival team owner McEwen (Robert Taylor). Nicky is free to keep whatever McEwen pays, but when Jess shows up, as Garriga’s girlfriend, will Nicky be able to keep his focus?

Will Smith basically retired for four years, after twice pairing unloved but lucrative blockbusters with odd dramas (The Pursuit of Happyness, I Am Legend, Hancock, Seven Pounds), before bottoming out with his MiB 3/After Earth double-whammy. Focus and the upcoming Suicide Squad seem to indicate an appetite for darker roles.

Focus just skirts over the pitfall that bedevilled Rian Johnson’s The Brothers Bloom, and so many other con-movies – you stop investing in any scenario because you expect the carpet to be pulled from under you any second now. But it falls far short of matching its obvious exemplar Ocean’s Eleven. 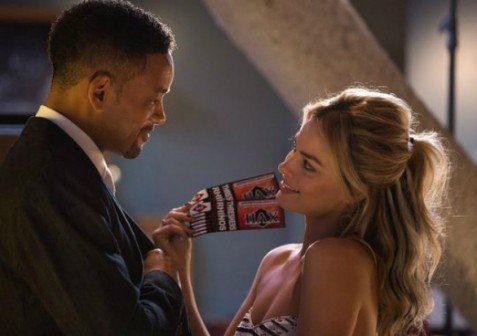 There are flashes of Ocean’s joy in choreographed larceny in New Orleans, but writer/directors Glenn Ficarra and John Requa are no Soderbergh. The score lacks pizazz, there are few stylistic flourishes apart from a brace of tricksy time-lapses within shots, and, most importantly, Nicky is no Danny Ocean – his gang steals from normal people, not from millionaires, and this is never really addressed.

This failure to make the hero a ‘good thief’ synchs with a puzzling lack of suavity in the writing, that Smith’s charm cannot overcome. Only two brief shots would need rethinking to visually render this a PG-13. But you’d have to edit language everywhere to get from R to PG-13.

Neutering Bad Santa writers Requa and Ficarra may seem outrageous, but they directed the excellent Crazy Stupid Love as a PG-13. They wrote Focus, but if they’re unwilling to exploit the R-rating by letting rip with obvious Dr Gonzo homage, the 400lb Persian Farhan, then what’s the point of constant swearing except as misdirection from the lack of nigh genre-required witty repartee?

Indeed one of the funniest moments may be unintentional, when Smith and the Australian Robbie keep straight faces while he warns her to put on more clothes, there are Australians about; they shipped them down under for a reason. Smith has in mind Robert Taylor, who embraces the chance to step away from being Wyoming’s most laconic lawman Walt Longmire, to play an obnoxiously loud and crude racing team owner, using his own Australian accent. Longmire’s eminence grise Gerald McRaney, however, merely plays a variant on his usual brand of crotchety arrogance.

Things come to a head in the truncated third act, but its big shock is no shock at all, because it’s been telegraphed at such painful length it’s practically been hand-delivered by Signor Marconi.

Focus is just about good enough fun to merit a trip to the cinema, but it’s a feather-light concoction whose big finale seems oddly underwhelming in its high stakes.

Focus is out Friday 27th January