Fringe: A Series about Family and the Sacrifices Therein.

When Fringe called it a day in 2013, after 100 episodes, one of the best sci-fi shows of the last decade came to an end. In-between monsters, shape-shifters, time-travelling and multiple universes, Fringe was a show all about family. Father-son relationships, starting a young family and the dynamics of close-knit working units are all explored and the sacrifices one must make to keep these intact are obvious throughout the five seasons.

If you haven’t watched Fringe in its entirety stop reading now, hop onto Netflix and get binging. Also I’ll spoil everything on you so stop reading. 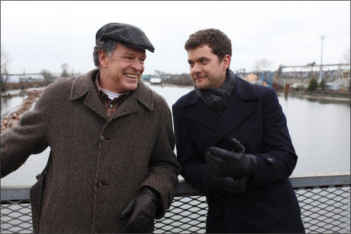 Before getting into the nitty-gritty of the article itself I just want to call out the fantastic work done by the creators JJ Abrams, Alex Kurtzman and Roberto Orci, the series’ directors and writers (including Brad Anderson (The Machinist), Joe Chappelle (The Wire), P.J Pesce, J.H. Wyman (Almost Human), Alison Schapker (Alias) among others), and the fantastic cast of Joshua Jackson, Anna Torv, John Noble, Jasika Nicole and Lance Reddick. These are the people who brought the family together, who left us on the edge of our seats and kept us coming back wanting more.

The obvious family dynamic is one we see from the very beginning, Peter (Jackson) and Walter Bishop (Noble). They work through their differences throughout the first season and even as the true origins behind Peter’s being in our universe comes to light the realisation of the sacrifices Walter went through to save him draw the two closer than ever.

Upon losing his son and witnessing Walternate’s failed attempt to create the cure for his Peter, Walter, in a mire of anger and selfishness, sacrifices, not one, but two universes to save “his” son. It is this “stolen time” that Walter struggles with most throughout the series. He even says that if he had the choice to do it all over again he does not think he would have “the strength to do anything different”, he made a call based on the love of his son. If you were asked to sacrifice the world for yours, could you? This is the troubling moral dilemma haunting Walter throughout the 5 seasons. He is burdened by guilt and it has driven him somewhat insane. When we see Walter at his clearest, and most genuine, is when this burden of guilt is lifted, if only momentarily, with love. The love for the son that he lost. The love for the son he never should have got to keep.

At the end of season 4, after Bell (Leonard Nimoy) tries to create a new world filled with winged-snake-spiders, Walter shoots Olivia (Torv) in the head, then bores a hole in her head, retrieves the bullet and saves her life (with the help of Cortexiphan), we find out that Olivia is pregnant – that was a chock-full episode. Olivia and Peter are to begin their own family and everyone is super happy and nothing could go wrong. Cue season 5. We jump 20 years in the future at the very beginning of the fifth and final season, where the Observers, a fairly sound bunch up to now, have established an Orwellian state in our universe. We soon realise that the new revolutionary heroine is none other than Olivia and Peter’s daughter, Etta. After some mucking around in amber the team is reassembled and the happy family are reunited. The love nest is soon torn apart by the Observer’s head-honcho and all-around arsehole, Captain Windmark. In a tear-jerker of a scene, Windmark finally catches up with the fleeing rebels and mercilessly shoots Etta before she dies in the arms of her loving parents. The loss of their daughter so soon after losing her before (in the madness of the observer infiltration of 2015) takes a serious tole on the relationship between Peter and Olivia.

Peter is hell-bent on revenge and to seek redemption for his daughter’s murder he utilises the Observer’s tech to become like them. He sacrifices not only his relationship with his wife but also his humanity to gain leverage over Windmark (or at least level the playing field). Olivia finally convinces Peter that keeping the family he has is more important than retribution over the family he has lost and his tech is removed. The interactions between Olivia and Peter are heartbreaking throughout these few episodes. With Olivia in mourning and Peter both distancing himself from the situation and immersing himself in his hatred towards Windmark, their family unit seems at times to be on the brink of devastation. The love that they share as well as the loss they both suffered connects them once more and the family is restored, albeit without their little girl.

In the final season we are reintroduced to one of the stand-out characters from this fantastic series,  Michael Cerveris’ September. September was the most prominent and influential Observer through the previous four seasons and is both the lynchpin to much of the goings-on in the main character’s lives as well as being a fan favourite. Not only was September the reason for Walternate not finding the cure, he also saved Walter and Peter from the frozen lake and warned the team on several occasions about oncoming trouble. September is also a father.

His son known as Anomaly XB-6783746 or simply Michael, which is less of a mouthful, was first introduced in an earlier season but then reemerged in season five as an integral part of Walter’s plan to end the reign of the Observers. September, having grown from his time as an Observer on Earth, witnessing the love and willingness to sacrifice everything for one’s own blood, and developing his own full range of emotions once he was banished to be one of us, a mortal human, started to feel deeply for Michael. Just as any father would his own son. The comparisons between both September and Walter’s need to fulfil a destiny, or a purpose, out of love of their children is one of the most compelling parts of the final seasons end.

One of the stand-out scenes in all five seasons came in the final episodes as Peter discovers a tape addressed to him from Walter. It is a tape explaining why he will one day cease to be and why Peter should not worry, as in doing so Walter is giving his son a chance to have the life he never did, and his grandchild a life that was taken away too soon, “as a father, how could I not do that for you?”. I may be a sturdy, bearded man in my late-twenties but I nearly wept like a child when Walter sobs “you’re my favourite thing Peter, my very favourite thing”.

This conundrum between who should take Michael into the future, to stop the geneticist from starting his work and starting the chain reaction that leads to the Observers, is a softened battle of will between Walter and September. Walter feels as if he deserves to be lost in the future and erased from 2015 as a punishment for messing with the fabric of time and space. September feels as if he deserves to go as it will show Michael that it is truly love that he feels towards him and it is his fatherly duty. As with Fringe on a whole, fatherly duties seem to win out across the board and September wins the battle of abandonment.

As we all know, September never got the chance to take his son across the black hole and Walter wilfully stood up to the plate. There is a beautiful shot just before Walter, with Michael in hand, walks away for the very last time and Peter is rushing towards the time-warp where he knows what is going to happen. He knows that Walter has to go with Michael and although inaudible with the cacophony of gunfire and explosions Peter mouths “I love you Dad”. It is a simple goodbye and a recognition of the sacrifice Walter has chosen. He simply chose his family to spend a life together rather than spending the rest of his life with his family. The finale was topped off with the letter that Walter sends to Peter, the white tulip; Walter’s sign for forgiveness and redemption. We know everything is alright.

Sure, watching the team defend the world against all kinds of bat-shit crazy scientific catastrophes was immensely enjoyable, but those moments of love, understanding between father and son and willingness to sacrifice everything are the take home moments from this brilliant piece of television. Fringe will always have a special place in my heart because of it.

Sidenote: I didn’t even get to mention Broyles once during this article, even though he sacrifices (there’s that word again) everything for his son and then again for the Fringe team. That’s how Fringe worked – you can sacrifice everything, twice.