Eoin Rogers continues his bi-weekly series on the history of comic books and their links to cinema. In Part 1 he talked about the early days of superheroes, while Part 2 looked at the censorship and regulation of comics in post-World War II America. Part 3 looks at the Silver Age Marvels who began to define the genre in the 1950s.

Before every great cultural movement there are misfires; small shots in the dark that maybe just aren’t powerful enough or aimed quite in the right direction to hit the collective hive-mind dead centre and spark something entirely new. Strange Adventures #9 saw Captain Comet launch into the nether-where of space in 1951 but he never really managed to fix an orbit with his key demographic. The Captain would always be something of an oddity existing in a climate directly after the implementation of the Comics Code but before the great superhero renaissance of the Silver Age.  There were other heroes too like the Fighting American, created by Joe Simon and Jack Kirby, and Nature Boy, published by Charlton Comics, but none managed to gain much traction with the public. Even the old guard, the golden heroes of yesteryear, Batman, Superman, Wonder Woman, Captain America, seemed to be flagging in sales and popularity. What then would it take to resurrect the superhero, to reignite the passion for justice and truth? It would take a creative spark with a bolt of inspiration and an imaginative Flash. 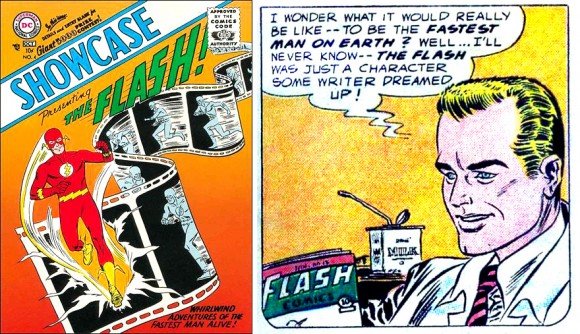 What is commonly referred to as The Silver Age of comic books began in 1954 with the new Flash debuting in Showcase #4. Blonde haired, blue eyed, forensic scientist Barry Allen, literally ran off the unspooling show reel which adorned the cover of Showcase #4. The Flash had of course existed before. He was Jay Garrick the silver helmed speedster of the 1940s but within Showcase #4 Barry Allen was seen reading a comic book which contained the adventures of Jay Garrick; he was just something some writer had dreamed up, Barry Allen was the Flash now.

In his skin tight, streamlined, head to toe vermilion suit Barry Allen would forever change the archetype of the superhero. He was a straight laced do-gooder saving cats from trees by day and working over-time in the lab as a forensic scientist by night. Barry had been granted his super-speed when a lightning bolt struck a shelf of chemicals and doused him in a lethal suspension of disbelief! This scientific pedigree, the obvious science of lightning and chemicals, would inform the other heroes who would follow in his footsteps. DC began to revitalize many more of their properties changing costumes, powers, backstories, identities, and only retaining the familiar names of their heroes. 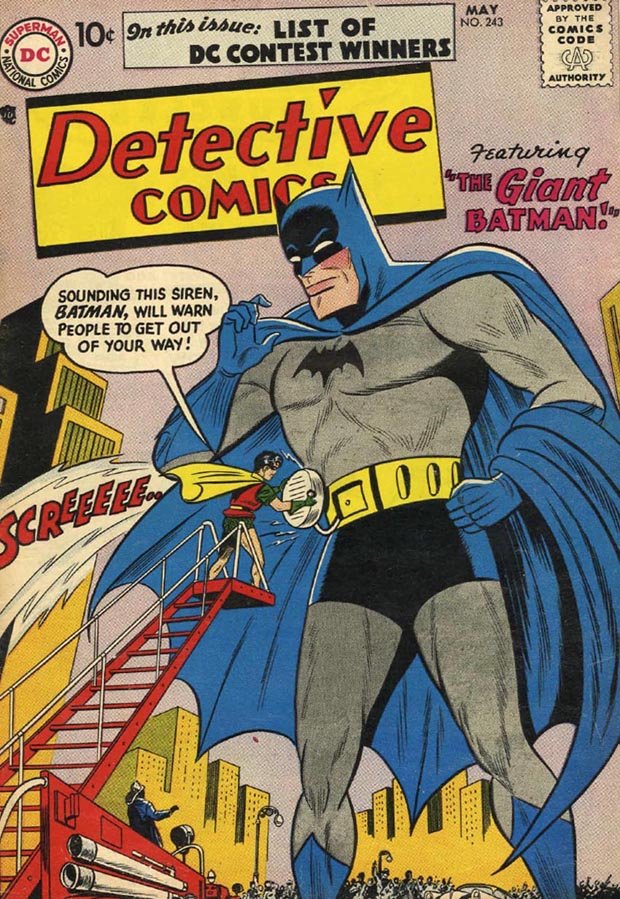 Green Lantern dropped the overtones of Eastern mysticism, lost the alias of Alan Scott, and became Hal Jordan, hot-head racer pilot by day, intergalactic space-cop by night. Even those heroes who retained their former identities were affected by the changing sensibilities. Batman turned away from his pulp origins and became “The World’s Greatest Detective” clad in a bright blue cape and, forgoing his vigilant watch over the streets of Gotham, chose to take a young ward and sidekick; Robin. Together they went on psychedelic adventures into the fifth dimension, dressed in zebra pint versions of their costumes, and conversed with small, floating, inter-dimensional imps. The Joker lost his homicidal tendencies and became somewhat of an actual clown, a flamboyant practical trickster with a predilection for elaborately devised but ultimately harmless contraptions and devices. Heroes like the Flash also had their own eccentric antagonists, fighting against bizarrely dressed and overtly themed criminals such as Captain Cold and Captain Boomerang.

The Code ushered in wave upon wave of revisions to many superheroes and while they might seem somewhat lame today, they proved to be extremely popular in their time and helped the industry to recover from what had been a very damaging period. Writers and editors were able to tap into the growing trends in science fiction as the American consciousness began to draw up against the Soviet Union, in preparation for what would become the space race of the 1960s. The Flash would continue to be the herald of innovation as in pages of The Flash #123 which detailed the historic first meeting of Barry Allen and his childhood hero Jay Garrick. Writing the story, Gardner Fox, the original creator of the Flash, imagined that they two heroes existed in parallel dimensions, on parallel worlds which overlapped but vibrated at different frequencies. With a single story DC had unwittingly opened the door to all of their Golden Age properties and characters allowing them to exist in continuity with their new sleeker and significantly more modern counterparts. Crossovers between the two worlds, designated Earth 2, containing the older Golden Age heroes, and Earth 1, containing their spritely contemporary counterparts would become first an annual and then regular occurrence, especially in the Justice League of America title. 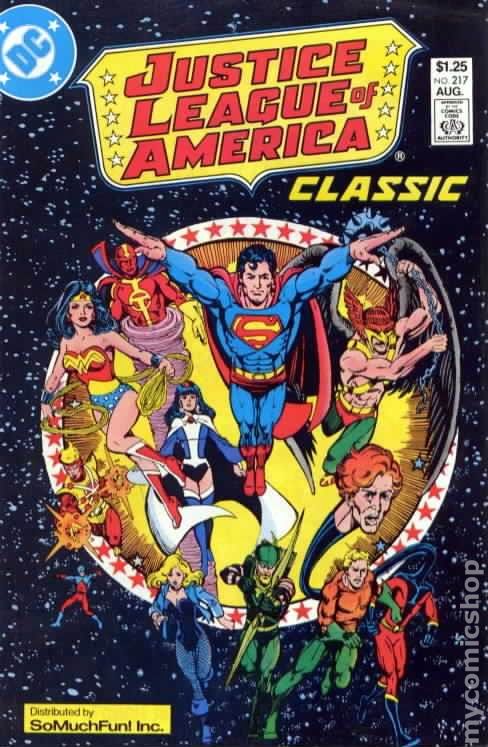 Launched in October of 1960 the Justice League of America was a title that contained all of National Comics most popular characters; Superman, Batman, Wonder Woman, the Flash, Green Lantern, Aquaman, the Martian Manhunter. It was yet another update revitalizing the Justice Society of American title, popular in the early 1940s. National’s success with the Justice League of America as well as their relaunched and rebranded superheroes had not gone unnoticed. Martin Goodman was the owner of Atlas, now publishing comic book content under the name Marvel, and he approached his editor to produce a team comic similar to Nationals Justice League of America title. That editor was Stan Lee and together with the help of Jack Kirby in November of 1960 the two published The Fantastic Four #1. Marvel Comics would continue the trend that National had started and bring the superhero to new heights.

Stan Lee was poised to start exploring the depths of what it meant to be a superhero and accompanied by the dynamic artistic styles of Jack Kirby and Steve Ditko they developed a creative mentality which treated the hero as a human, a story telling style which would become known as ‘the Marvel Method’ and which would produce some of the best known superheroes who are still in action today.

The Fantastic Four in their unembellished blue uniforms were plagued with realtable problems from Reed Richards having to deal with his hothead and eventual brother in-law Johnny Storm, to Ben Grimm coming to terms with his monstrous orange appearance.  The publication of The X-Men #1 in September continued this as the (now famous) team of mutant heroes faced racial prejudice and discrimination as an unaccepted social group, much like the plight of those fighting for civil rights throughout the 1960s. Perhaps the best encapsulation of this process was one Peter Parker. Bitten by a radioactive spider (wait for it…) Peter gained superhuman agility and a spider-sense which allowed him to react quickly to danger but unlike any other hero at the time (wait for it…) Peter was a teenager and unlike Robin the Boy Wonder or Bucky Barnes (wait for it…) he didn’t have a mentor to show him the ropes of superherohood and so (wait for it…) had to discover on his own (wait for it…), as the costumed hero Spider-Man, that…

Such heroes; Spider-Man, the Hulk, the Fantastic Four, Iron Man, the X-Men, are still hugely popular today and the conditions for their inception were established, for better or worse, under the restrictions of the Comics Code.

The Code, be it for better or worse, changed the course of the comic book medium and definitely that of the superhero. It launched many crime fighter’s careers as clean cut, child friendly adventurists and helped to establish those contemporary fan favourites in the minds of children who would eventually grow up and be the ones paying the ticket price to see their favourite heroes on the big screen. It also set the stage for a rebellion.

The stringent censorship of the Comics Code had brought about the Silver Age. As Marvel continued to publish and create characters which were more and more nuanced the formerly clear cut lines of right and wrong began to blur. The readership for comic books wasn’t set specifically for children anymore as original fans began to grow older and adults were drawn to the more sophisticated storytelling style which was developing at Marvel. The underground comix scene was also flourishing throughout the 1960s aligning itself nicely to the sense of rebellion which the counterculture philosophy was whipping up. As the Code began to grow gradually more and more out of touch publishers began to take greater risks in terms of depicting darker material and as the time slowly edged towards the 1970s this trend would eventually lead to alcoholic superheroes and sidekicks on crack…

Shot of Science- What is Sleep? Koalas, Bill Gates

From Panel to Projection Booth |7| – Invasion, Crisis, and the Silver Screen

From Panel to Projection Booth |6|- Lights in the Dark Age

From Panel to Projection Booth |2| – The Comics Code Authority

From Panel To Projection Booth |1| – SHAZAM! Battle of the Super Men