Could Ghost Rider Get A Reboot? And Who Would Star?

Back in the spring of 2014, news broke that the Nicolas Cage-starring Ghost Rider saga was officially dead after the third installment was cancelled. As reported by Cinema Blend, the reason for the cancellation was that Columbia Pictures forfeited the legal rights to put the character on the big screen back to Marvel Studios. It wasn’t the biggest catastrophe for Marvel fans given that the Cage films were not too well received. Rather, the announcement represented hope, for some, that the popular comic book character could get a fresh start under the ever-expanding Marvel Studios umbrella.

Screenrant took the story further by clarifying that fans of the satanic stuntman antihero should probably hold off on getting their hopes up. Marvel creative maestro Kevin Feige has downplayed the chance of anything imminent, and there are no official reports of anything in the works regarding a reboot. On the other hand, two of the other characters for whom Marvel recently regained licenses were Daredevil and Blade, and it appears that both will move ahead under Marvel Studios. Daredevil has already reappeared in a popular Netflix original series (in collaboration with Marvel Studios) and there are strong rumours of an upcoming Blade revival. It’s only natural to wonder if Ghost Rider may be next in line. 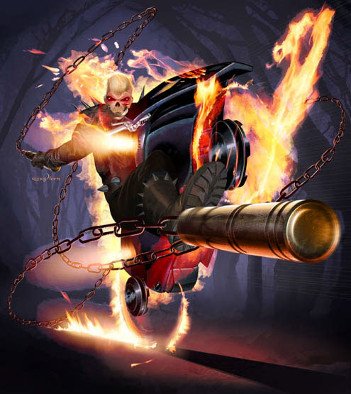 Outside of news outlets and official reports, there are also some subtler indications emerging that Marvel may not be done with Ghost Rider just yet. Betfair’s slots section offers one such indication in the form of a Ghost Rider game that’s featured in the company of other games based on Marvel heroes. That could just be random, but it’s worth noting that if rumours of a Blade revival are true, Ghost Rider would be the only featured Marvel character on the site to not be a part of modern Marvel projects. For reference, the Avengers, the X-Men, Daredevil, and Elektra (who’s appearing in the second season of Netflix’s Daredevil) are the other characters.

Strengthening that idea is the fact that the Marvel Heroes online game is also focusing a great deal on him of late, as it revealed a special new costume for players controlling Ghost Rider just earlier this month (the “Ghost Racers” outfit). That too could be random, but it’s clear that some branches of Marvel’s creative empire are responding to fan interest in Ghost Rider by encouraging more of it.

At this point it’s all loose speculation, but don’t be too surprised if a reboot of the Ghost Rider character is announced in the near future, either for Netflix or for a standalone film. But who would play the part in a reboot? Well, again, it’s purely a guessing game, but here are some interesting names proposed by Moviepilot

Karl Urban – An interesting choice, because Urban never quite gets his due. He’s a fine actor who could probably provide a more tortured or conflicted take on the character.

Joel Edgerton – This would be an ambitious move for Marvel, as Edgerton has become a very serious actor, but it would lend credibility to the reboot.

Josh Holloway – He may just be the most natural fit on the list.

Kiefer Sutherland – He’s kind of hit-or-miss, but he brings his own fan base with him. We also know he can be something of an unstable bad boy from the last few seasons of 24.

Those are just a few of the ideas, and it’s also highly possible that Nicolas Cage could reprise the role in any Ghost Rider reboot, given that Wesley Snipes appears to be on the verge of playing Blade once more. But either way, it’ll be interesting to see if casting and revival rumours continue to pick up in the coming year or so.

Review | Grimes unleashes the most dizzying, brilliant and batshit crazy pop record of 2015 with Art Angels

What You Need To Know Before Going to See Captain America: Civil War