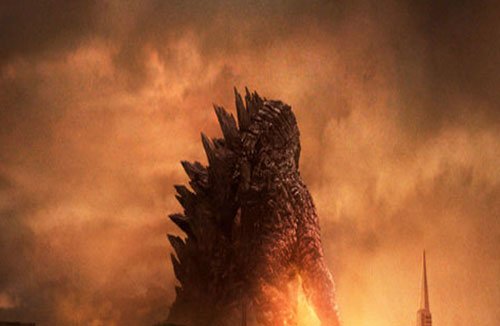 Contains spoilers!
Godzilla is the latest instalment of a franchise which has been ongoing for sixty years, starring everyone’s favourite radioactive, giant, oceanic reptile. The film is directed by Gareth Edwards, and the billing includes Brian Cranston, Aaron Tyler-Johnson, Ken Watanabe and Elizabeth Olsen.
The prospect of a new Godzilla film really excited me seeing as it had the potential to be both politically aware (metaphor, allegory etc.) and visually dazzling and exciting (monsters, brawling etc). Oh and Brian Cranston is in it too!
Godzilla as a cultural artifact has proven to be resilient and adaptable, having found expression in a multitude of different media over the last six decades. Part of the reason for this success lies in the allegorical nature of the beast. Like most other movie monsters, such as zombies or vampires, Godzilla can usually be seen to represent something greater than itself. This has been the case since Godzilla’s inception with it being near universally understood that Godzilla was originally conceived as a metaphor to illustrate the destructive force of nuclear power. The ability of the monster to articulate the fears of Japanese national consciousness, having recently been victim to the atomic bombing of Hiroshima and Nagasaki, mixed with its unique visual design helped to establish Godzilla itself as a mainstay within popular culture.
Unfortunately this new depiction of Godzilla sees the allegorical potential and power of the monster ignored. The film distances itself from any political or environmental commentary by viewing Godzilla as a cultural icon. The film serves as a celebration of the original cinematic iconography by simply taking the idea which was born in 1954 and trying to render it faithfully with modern technology. Godzilla is explained away as a radioactive dinosaur when a more plausible explanation may have been that he walked out of frame in 1954 and is returning to our screens, lured by all the attractive CGI graphics. There are attempts made to provide some kind of insight and depth to the monster, and the film by proxy. These attempts are mostly supplied by Ken Watanabe’s character, but the faux-philosophy he provides often appears random and disconnected to the subject matter which, for certain cinema goers, made his insights laughable. The inclusion of Watanabe to the cast seems to be more a crude nod to the political significance and nationality of the original monster.

As many people now know, Brian Cranston is a fine actor. He proves this point with his brief performance – brief being the essential word here – yielding maximum emotional development with minimal on-screen time. One could mistake Cranston as the protagonist of the film having viewed the various trailers he starred in but this is not the case. His character is killed off after roughly the twenty minute mark. With the emotional anchor lost in Cranston’s death the remaining established characters develop into functional viewpoints from which the various massive creatures can be partially viewed. Aaron Taylor-Johnson’s inability to render any emotional immediacy greatly contributes to this process. What began as a promising exploration of the relationship between an abandoned son and an estranged father is scrapped early on and there is no great effort made to replace it with anything meaningful which the audience can either relate to, or engage with. The action sequences float amid scenes which exist purely to provide exposition for a plot that only serves to keep the human inhabitants of the film busily passing bombs around, losing them and then trying to retrieve them.

The film’s one strength is, you guessed it, Godzilla, with the monster being impressively visually displayed, in particular his introduction, by director Gareth Edwards. Godzilla’s main threats, two other bat/insect like monsters don’t carry half as much gravitas as the titular reptile but do have a lot more screen time. Even with the directorial flare for finding interesting perspectives by which to introduce these huge monsters into shot, the film greatly suffers by  ignoring many of the storytelling elements available to it and as such the lowly, cardboard humans and their irrelevant bomb-juggling plot is made to seem completely superfluous in comparison to the brawling monsters. As such the film felt like it lacked a cohesive center.
There would appear to be a trend where certain films are given leeway to alienate an audience to a degree in order to achieve some echelon of cinematic achievement or nuance which is understood to be beyond the remit of the ordinary cinema goer. Films like Gravity, while critically acclaimed, received mixed reviews from most of the people I talked to about it. In these cases the films are usually exempted from ordinary criticisms like “The story was rubbish” or “Yer man can’t act” as they are viewed in relation to a projected past or future of cinematic significance. Avatar is the best example of this, where the technical spec was deemed so deadly everyone was allowed to ignore the story, which was complete pants. I consider Godzilla to be of the same ilk. This is a film which was clearly made by fans of the original Gojira film of 1954 with the modern depiction of Godzilla being heavily influenced by the visuals and intentions of the original. It serves as a love letter, a means by which to celebrate an established cinematic canon and an illustration and celebration of the longevity of the particulars of the entry, namely a giant radioactive reptile, into such a canon. These are all worthwhile endeavors in terms of film studies but are, in my opinion, not worth the price of admission.
FilmGodzillaMovieEpicDisasterMonster
Share FacebookTwitterGoogle+ReddItWhatsAppPinterestEmail

The Influence of H.R. Giger