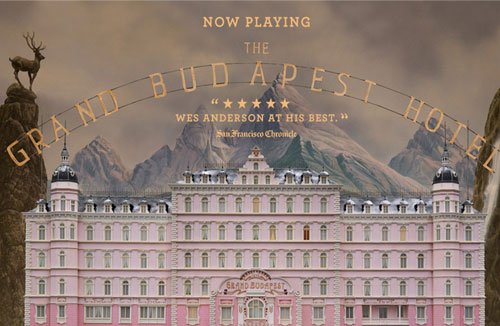 In his talented way he gravitates toward moody themes in his works and Anderson’s followers will not be disgruntled by this new film.

Let’s enter into the magical, visual and visionary world of Gustave H’s adventures at the Grand Budapest Hotel, the glorious and terrific building nestled in Zubrowka’s mountains. Gustave is the proud concierge at the hotel. His life and his flamboyant personality are the background to a tender and much unexpected story of friendship (with Zero Moustafa, the young lobby boy), and love (between Zero and Agatha, who works in the local Viennese-style patisserie), a pure and tender sanctuary from loneliness and the upcoming war’s violence. A subject dear to Anderson, as already seen in Moonrise Kingdom.

He creates a colorful and touching ‘fresco’, in which Ralph Fiennes (in a state of grace), stands out with his performance: a super vain but heart-warming concierge. His sense of beauty and kind-of-love for the lavish old ladies, is a cynical look at the life of a man who lives in a gilded world of illusion and appearance. Gustave has a maniacal attention for details and an eccentric love for perfumes. His lobby boy Zero, is a young version of himself: both alone, and both loyal and committed to their job.

The movie has also a brilliant coup de theater, turning into a crime story with an ironic sense of suspense (the theft and recovery of a priceless painting, a donation by the decrepit Madame D.), with an eye on the continent’s changes. A bittersweet comedy; Anderson, as scriptwriter, is at his best, maybe, I’d even have to consider it a stronger script than The Royal Tenenbaums.

Also remarkable is Willem Dafoe as Jopling: his wrinkled face makes him the perfect look for a villain, dreadful but hopelessly charming. The soundtrack is impeccable as usual, to underline and protect the intimacy of the character’s feelings.

A five star film. Enjoy it!

80's daughter, with a Master's Degree in International Relations. Passionate for Middle East world, photographer for fun and hopelessly in love for Jane Austen's novels.

Ep 5: That Night We Won with Niamh Kavanagh and Neil Delamere