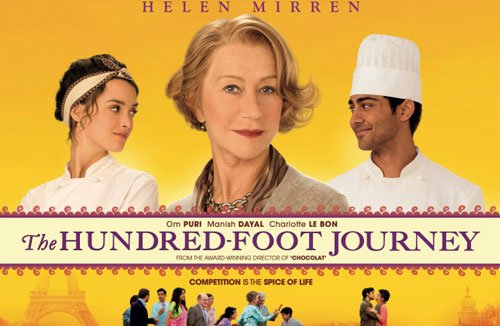 I’ll begin by mentioning that this film has been produced by Oprah Winfrey who as we all know, is the producer of all that is good and right with the world. She has teamed up with some guy called Stephen Spielberg, who I hear is rather good at this movie business.

The Hundred Foot Journey has been adapted from the book by Richard C. Morais, it is a story about family and food. The Kadan family run a popular restaurant in Mumbai. Hassan Kadan (Manish Dayal) has a special gift passed on from his mother and they run their bustling kitchen together. After a turbulent political election there is a social upheaval and their restaurant is torched. Hassan’s mother is caught and killed in the fire. Devastated, having lost everything the family flee Mumbai to seek refuge in Europe.

After a brief stint in Heathrow, they are briefly interrogated by the French emigration and voila, we are taken to the hills of the French countryside. Unfortunately, or fortunately (wink) their car brakes fail and they crash into the side of a mountain where they are rescued by a local French girl who looks like a forest nymph, speaks fluent English with a gorgeous, thick accent and makes her own cheese and bread which she serves them in her provincial French home.

As the family get ready to continue their search for a new place to live, their rather stubborn father, Papa Kadam (Om Puri) discovers an old building for sale and has a brainwave; he will invest his money (time to disregard the part of the film where there was a devastating fire and the family lost everything) in a brand new restaurant, with Hassan at the helm.

This is despite his children’s reservations and the fact that they will be cooking their food in a place where the people have their own very important traditions around food. A place where people choose creamy, buttery sauces over spicy curries. Is it all entirely ridiculous? Yes. But am I prepared to overlook this? Absolutely. Why, because the food just looks so bloody good.

As soon as the family’s culinary adventure begins we are assaulted by Madam Mallory (Helen Mirren) a snobby French, Michelin star restaurant owner and their new neighbour. She is disgusted by their traditions and how they don’t understand ‘the classics’ and so begins a war between the two sides. Luckily, we all know she’ll come around and they’ll all be best friends and drink loads of delicious wine and maybe even dance. What am I talking about, of course they’ll dance. They’ll slowly begin to understand one another’s cultures, barriers will be broken, love will flourish. So many omelettes will be made and eaten, hopefully by me. 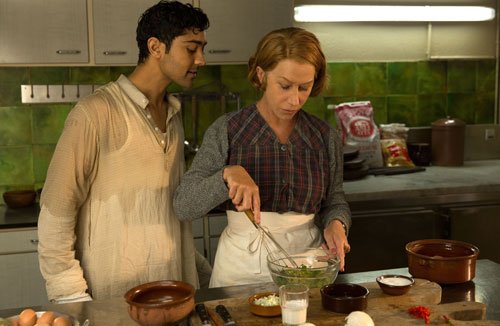 To be honest, I probably only like the film because the food has been caught so well by cinematographer, Linus Sandgren where we can admire the rich, vibrancy of Hassan Kadan’s skilful cooking or marvel at the explosion of colour from the fruit and vegetable stalls at the French markets, as well as the stunning scenery of the French countryside.

From time to time it annoyed me that Helen Mirren played a french woman. Why couldn’t she just have been a British expat in France? We all know it’s Helen Mirren, her accent was decent enough but it was as though she was trying to fool the whole village into thinking that she was French and they all knew she wasn’t, but they just went along with it anyway and obligated her by speaking in English most of the time.

But I won’t say anything else negative because this film is perfectly lovely and it reminded me of my own fond food memories. When there is food we talk, we laugh, we share. It is all a bit unrealistic and fairly cringe inducing at times but I forgive it these weak points because it was harmless fun and the characters were charming and so, so attractive and there was a constant supply of baguettes and cheese, and chutney and sea urchins, which are delicious apparently. In fact I think we should all drop what we are doing right now and go and eat a sea urchin in the French countryside with cute French girls and handsome Indian men. Plus, now you know what to cook for Oprah if she ever calls around for the chats.

Rest In Pixels: How will you be remembered?