Following on from Nysferatu: Symphony of a Century, his recreation of Friedrich W. Murnau’s 1922 film which screened at the Bram Stoker Festival in 2018, Italian director and artist Andrea Mastrovito returns to the 2020 online festival with I Am NOT Legend. With a soundtrack from Irish composers Matthew Nolan and Stephen Shannon, Mastrovito employs his own techniques of drawing, painting, and physically ripping paper by hand to create a disquieting and imaginative reinterpretation of George A. Romero’s landmark 1968 horror Night of the Living Dead.

I Am NOT Legend plays out like a game of word association, with each line of dialogue consisting of quotes from famous films, books and songs. Each reference builds upon the last as the trapped characters borrow or paraphrase quotes from the universes of Jaws, R.E.M. and War of the Worlds, among many others. At seventy minutes, I Am NOT Legend plays around with Night of the Living Dead’s narrative, sometimes changing small aspects due to a line of dialogue and occasionally deviating in larger ways from the original plot. Nolan and Shannon’s string-led soundtrack carefully modulates the viewer’s experience, at times sucking the audience in with a pulsating rhythm which reflects the rising action, and at others creating a more detached atmosphere through relaxed melodies at odds with the onscreen tension.

To borrow from another property, I Am NOT Legend is extremely reminiscent of Moby-Dick‘s rumination on “a peculiar emptiness about the color white.” Romero’s zombies have been reimagined as white silhouettes – or, indeed have been removed completely, and are evinced only by their absence. Faceless and featureless, each bullet wound that pierces them is rendered as a cartoon-like black hole. This whiteness can only be chipped away at tiny piece by tiny piece, which may ultimately not prove enough to prevent it from taking over.

Mastrovito’s canny and entertaining injection of popular culture references invites the viewer to consider the extent to which characters propel the plot through their decision making or are swept along by the impulse to cling to familiarity. The most evident change, which also happens to be one of the most edifying (and satisfying) aspect of the reinterpretation, is the focus on the use of the television which relocates the film’s events to a 2020 setting and provides a new context to the eponymous night’s events. While Romero’s zombies can always be associated with fears of contagion and the dangers of racism, Mastrovito makes explicit the association between Night of the Living Dead and Trump’s response to the Coronavirus, all the while foregrounding his regime’s scapegoating of minority and ethnic groups.

Thought-provoking, chilling, and nuanced in its careful uses of adaptation and recontextualisation, Mastrovito’s reimagining will be fascinating viewing for anyone interested in either Romero’s work or wider explorations of popular culture. 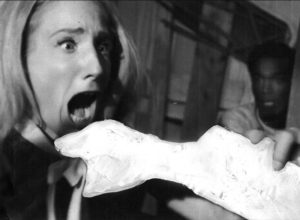 I Am NOT Legend screens each night of the Bram Stoker Festival, 30 October to 2 November. Details can be found online at www.bramstokerfestival.com.

Sarah Cullen is a PhD of American literature who hates all films and wants to tell you why. Her research examines representations of night time in nineteenth-century literature and she lectures in UCD. She's a regular contributor at Film Ireland and the Irish Gothic Journal. You can follow her @sfdcullen

Passing Gets An A+ | Netflix Film Review

The Most Beautiful Boy In The WorldReclaims Andrésen’s Voice | Documentary…