Imagine the plot of the movie The Martian really happened. There was a NASA Mars Mission like ARES from the the film, and there was a tragedy where the crew legged it leaving one astronaut behind. He would be stuck on an arid planet, all on his own, 225 million kilometres away. It probably goes without saying that it would be a bad time, pretty lonely. He wouldn’t even have Twitter to keep him occupied because there’d be a 24 minute delay to his tweet-reading and therefore he’d always miss every trend. He’d be replying to something Joss Whedon tweeted about, and then 24 other things would happen before he even realised that Joss Whedon wasn’t on Twitter anymore. 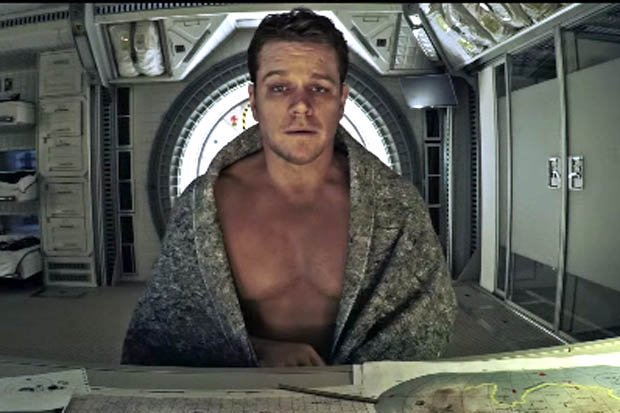 He’d read a tweet about the discovery of water on Mars and then he’d go running up the hill to jump in it before he read the next tweet which would say, ‘we can’t touch that water because we’ll contaminate it’.

“Stop ruining everything, Watney”, Fox News would say. “God put you on Mars for a reason”.

It wouldn’t be Mark Watney, he’s a fictional character. For the sake of the point I’m trying to make, let’s call him ‘Bennett’. Astronaut Bennett. A. Bennett. Yes, that will work.

But actually, that’s kind of my point. He wouldn’t run up that hill and splash around in the weird salty martian water. He’s a scientist, he’d know better. He wouldn’t jump to conclusions like Fox News. He’d be smart, calculated, and a damn good role model.

Let’s say that Bennett gets left for dead. I mean, that’s the only logical outcome: he’s wounded, his spaceship and crew are gone, he has some food stored but only enough for a few weeks, and the planet is completely barren (NOTHING GROWS THERE), and also, for a kicker, he can’t communicate with the crew that are on the way home, or NASA, or Joss Whedon, or anyone on Earth or any other planet. Right? So he’s fucked. Grand. Oh, I suppose that I should add that the planet doesn’t want him, he can’t breathe there (without technological magic) and the ominous mountain beside his little future cottage keeps throwing violent get-out-of-my-garden storms at him.

So, you’re with me? This is real life, Bennett is up there, and nothing can be done. He will die within a few days, if he’s not already dead, right?

Now, if what happens in the movie, (he figures out how to survive, grow stuff, communicate with Joss Whedon (if NASA can get him into HQ for an IM chat) and travel fairly long distances on the unwelcoming red planet), happened in real life, AND he made it home (eventually) safely – he’d be the most famous man in the world. Probably the most famous person ever. He’d basically be Neil Armstrong multiplied by Jesus Christ with a sprinkling of A-list Hollywood movie star Matt Damon, with some added Dumbledore or Gandalf or someone. Megastar wouldn’t be a big enough term for how famous this dude would be. He’d be the world’s first, and only Cosmostar. (This is when using the word ‘star’ to label famous people would start to become tricky, because all real stars are cosmo-stars, but we’ll tackle that issue another day).

Now, here we are. Bennett is back on Earth, he looks fit again, nice haircut, good skin, healthy weight. Completely free of any psychological hiccups, if anything, he’s a more well-rounded person than he was before his little space jaunt.

Now the most famous person on the planet – for maybe the first time ever – is a universally positive role-model. His survival represents human endeavour; willpower, intelligence, thriftiness in the face of seemingly insurmountable doom, worldwide collaboration, the generosity, excellence and cooperation of world superpowers, science and, perhaps above all, good humour. This isn’t some dusty old scientist who survived when all the odds were against him, who comes home a little bit teed off, to say the least, and then commences on a world tour of lectures in which he complains about good old fashioned something or other. No! This is an attractive, cool, smart, funny guy who didn’t really care about nonsense old-timey rules like “don’t say bad words” and “always do what you’re told”. This guy, Bennett, a scientist, the most famous person in the world, would inspire millions of young people to go out and change the world. There would be more people imitating the videos of him on YouTube, like trying to grow potatoes in their local desert (and maybe discovering some scientific breakthrough in the process), and less people looking at videos of Miley Cyrus and trying to work out the complexities of how to hold an iPhone in selfie mode and twerk simultaneously.

We’d have more ambitious space programmes and more scientists, and therefore, more genius scientists in the next generations of young people. Now, there would be no TV shows like X-Factor (and all the other dredge in this category), and “Help! I’m stuck in a House/Commune/Island” type shows. In their place, Science Factor, where the most inventive or clever contestants would win, and no one would lose, and no one would be slagged off or used as fodder. The non-winning contestants would also be aspiring scientists who might go on to change the world, or work on a large project, or help to improve something.

People like Taylor Swift and Cristiano Ronaldo would still be very talented and popular entertainers, but they’d be just that, entertainers, and they’d have to work hard to make their money, like they do now, but their worth would be akin to a hard-working touring band, they wouldn’t be multi-millionaires. No, the top scientists and engineers would be the high-earners, maybe similar to Elon Musk, but they wouldn’t care too much about the money, they’d just be interested in breakthroughs, discoveries, cures, improvements, decreasing bad things, increasing good things, propelling humanity further and further into spacetime and, if I may suggest a cliché, ending world poverty (as ridiculous a notion as that may be).

In this world, where Bennett the botanist and astronaut is the person that most people look up to, wealthy oil merchants, inspired by the great things humanity can do, spend their fortunes cleaning up the mess that they and their ancestors have made. They remove oil rigs and fill in the holes (no one needs oil anymore anyway, some kid has made solar power (or some other clean energy) more efficient and affordable than anyone could have imagined), they clean up the seas and fund projects that are tackling the CO2 problem, they make a genuine effort to protect the arctic and the rainforests, they are changed people, and they are good.

Bennett, the wonderful astronaut, doesn’t milk his fame. He doesn’t put his name to brands, or his face to large corporations. He does the odd interview (which always get the highest ratings so he shares his appearances around and even goes on The HeadStuff Podcast). But mainly, he sticks to teaching. He teaches the next generation of astronauts, he helps them excel and stretch the boundaries of what was previously thought of as possible.

Religions begin to die away in a more dramatic fashion than they have in real life. Some religious people open their minds and see that, when Astronaut Bennett talks, he speaks the truth. When he says he has gone further than any other human and seen no gods, and no gods helped him to escape Mars, it was manmade collaboration, technology, intelligence and determination, and that he has no reason to believe in any gods, many people put down their blind faith and decide to do some real good, and live their lives in a positive, open, learning way.

So, we’d end up with a much better world. Maybe we should manufacture this? Are you listening NASA, ESA, Musk? Find someone excellent, send them to Mars, fake a disaster, leave him stranded there, make it look like he’s going to die but actually leave handy things about the place to aid his survival, then in a few months save him. When he gets home, hook him up with some good PR, and hey presto – Utopia.