By Ged Murray Last updated Jan 28, 2015
Share
It would be easy, based on the trailer for Inherent Vice, to see this as Boogie Nights Part 2. The reality is that PT Anderson is a different filmmaker now and that this film is a different beast all together. It’s less about dazzling you with steadicam sequences and more concerned with drawing you in and fucking with you.

The Story follows Doc (Joaqin Phoenix), a hippy PI, whose life gets flip turned upside down when an ex reappears and sets him on the trail of a seemingly vast conspiracy. Along the way he deals with rehab cults, druggy dentists, Nazis and Josh Brolin as a batshit hilarious cop with a hatred of counter culture. The setting is California in 1970. If the high watermark speech from Fear and Loathing was about wistfully looking back at 60’s ideals after they’d unravelled, this story takes place at the splash; the point of everything going tits up that would leave a stain for Hunter S Thompson to get all teary about later. 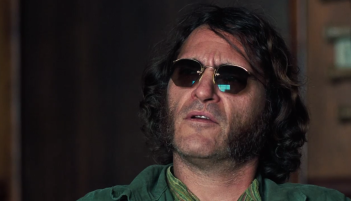 As a detective story it’s not really about solving anything. That’s not to say that the story doesn’t hang together. It’s just never clear how much sense it’s supposed to make. This disconcerting feeling is reflected in how the opening scenes are shot and cut. It has that ‘where am I?’ feeling you’d get waking up after a bender. Many scenes are shot in one slow, crawling take as if we are tip toeing into a hushed conversation.

It’s also worth mentioning just how good the whole thing looks. Much of it was shot on old gear to give an authentic 70’s feel to the images, which themselves are often brilliant and surprising. Doc lying in the desert foreground with a row of Lilliputian cops behind him is one image that lingers as well as being reminiscent of the opening of The Master.

Based on Thomas Pynchon’s novel of the same name, this is a difficult and demanding watch. Writing this after one viewing seems perilous. Doc mumbles a mixture of important details and presumable gibberish. You have to pay attention and there’s a lot to sift through. This doesn’t mean the film isn’t fun. Brolin couldn’t be funnier and there are moments of great slapstick from a great cast. Like Boogie Nights, it’s comedic and concerned with a loss of innocence but it’s more akin to the director’s later work.
It’s a beautiful, silly puzzle. Whether the pieces are meant to fit together is another thing but this is a film that asks to be seen more than once.
FilmMovieFilm ReviewMovie reviewReviewInherent Vicejaoquin pheonixjosh brolin
Share FacebookTwitterGoogle+ReddItWhatsAppPinterestEmail