All irregularities will be handled by the forces controlling each dimension.
Transuranic heavy elements may not be used where there is life.
Medium atomic weights are available: Gold, Lead, Copper, Jet, Diamond, Radium, Sapphire, Silver and Steel.
Sapphire and Steel have been assigned.

That introduction was for most episodes the sole explanation of what was going on in the early Eighties science fiction show Sapphire & Steel. Indeed, even after watching the entire short run of the show viewers will be left with more questions than answers. [1] Yet perhaps that’s why this show enjoys a cultural footprint out of proportion to its short lifespan. People in general enjoy shows more when they don’t know for sure what’s going on, and are invariably unsatisfied with the explanations they receive. If Lost, for example, had ended after its first season then it might be remembered as one of the greatest shows ever, but as more and more was revealed of its secrets, so less and less interest remained. So when a show reveals as little as it can, then the interest survives.

What we do know about what occurs in the show can be summarised pretty quickly. The title characters, Sapphire and Steel, are two operatives of some unknown agency tasked with repairing weak spots in time before extradimensional entities can use them to invade our world. [2] These rifts are most commonly caused by people ‘mixing the old and the new’ – for example, compositing new figures into old photographs, or hosting a 50th anniversary party using authentic fifty year old clothes and furnishings. The creatures that take advantage of them are never seen, only implied, and the show relies far more on atmosphere than special effects. Neither of the two Operatives seem human, though Sapphire definitely seems to have a greater connection to humanity than Steel. Sapphire is played by Joanna Lumley, well known for many roles from Bond girl to Absolutely Fabulous co-star. She is the diplomat of the pair, gifted with psychic powers that let her read minds as well as the history of objects. In addition, she displays the power to turn back time in a localised area, though there are limits to this. Steel is played by David McCallum, most famous for playing Ilya Kuryakin in The Man from U.N.C.L.E. in the 1960s. In contrast to Sapphire he shows primarily physical abilities such as strength, enough to lift an elevator car by the cable, and resistance to physical harm (he blocks a knife point with the palm of his hand). He also has the ability to reduce his temperature to near absolute zero and thus destroy ghostly manifestations, though this is shown to be dangerous to him without the aid of Lead, another “element” with the ability to protect him. In addition to Lead’s appearance in one story, the show features a technician named Silver in two stories, who has the power to transform objects and repair and control machinery. In total, there are 127 such elements, though 12 are “trans-uranics” who, as the introduction points out, cannot be assigned where life exists. All of these characters also share the ability to communicate telepathically, something which Sapphire has to occasionally use to remind Steel of the basic facts of existence he forgets – such as that, for most people, time moves forwards.

The show is very much an artefact of its time, ironically. It was created by Peter J Hammond, a prolific TV writer to this day, after he spent a night in a haunted castle. In fact, the atmosphere of the show is far more reminiscent of ghost stories than that of science fiction. The show was produced on a shoestring budget, using pre-existing sets and costumes and adapting the stories to fit those. These juxtapositions help to add to the sense of unease, as does the claustrophobia of each of the stories taking place in a single location. The main expense was the salary of its stars, though their performances confirm that was money well spent. The first season was broadcast in 1979 and consisted of two stories, broken up into half hour episodes (six for the first, eight for the second). This was interrupted by industrial action within ITV however, and the series had to go on hiatus halfway through the second story, resuming from the start several months later. It’s a matter of debate as to whether this harmed or helped the show, though it was popular enough to get a tie-in comic strip in ITV’s children’s magazine Look-In, as well as a Christmas Annual. The first is well-regarded, the second much less so, but both were markers of the show’s impact. The second season consisted of three stories, two of six episode length and one of four. Unfortunately it became clear to Hammond at this time that the show was unlikely to continue. Both Lumley and McCallum were proving harder to get hold of for filming, while the show’s popularity was failing to win over ITV executives who found it hard to pigeonhole. As such when the sixth story was filmed he chose to end it after four episodes, on an ambiguous cliffhanger that sees the duo trapped outside of Time. Though he did have a plan for getting them out of this scenario, it proved to be unneeded. Even before the series was aired the production company behind the series, Associated Television, lost its regional franchise with ITV and was forced to go under. Its assets, including the unaired Sapphire & Steel story, passed over to the newly formed replacement Central Independent Television. They declined to film any new episodes, and finally showed the last story in August 1982. Despite their lack of publicity, the first episode was one of the 20 most watched programmes in the UK that week.

The end of the series was, as with most cult TV, simply the beginning of its rise in popularity among fandom. The original recordings were in fact saved by that fandom – the tapes were marked for wiping and reuse, a common practice of the time that caused many shows to vanish into the ether, but a fan at the archive ensured that they were ‘accidentally’ kept instead. The series circulated on bootlegs through the 1980s, before receiving a home video release in 1992, and ten years later a DVD release. The show was the rare example of a cult classic that actually lived up to the hype, and it was a direct influence on later shows such as Life On Mars. In 2005, Big Finish (best known for their Doctor Who audio dramas) began releasing a series of Sapphire & Steel follow-on stories, eventually producing 15 stories over the next three years. A remake (described by PJ Hammond as a “generic runaround”) was talked about in 2010, but the backlash to the US remake of ‘The Prisoner’ (which also played fast and loose with the original) put an end to the idea. At least, until now.

Just this week (in fact, shortly after this article was originally written) Neil Cross, creator of the cult crime drama Luther, announced that he was planning to relaunch Sapphire & Steel. Cross has also written episodes of the new Doctor Who including ‘Hide’, a story about ghost-hunters and time distortions that showed more than a little Sapphire & Steel influence. [3] Perhaps he’ll be the one to help Sapphire and Steel escape from that trap outside Time, and assign them to duties once again. Just as long as he doesn’t give us _all_ the answers. 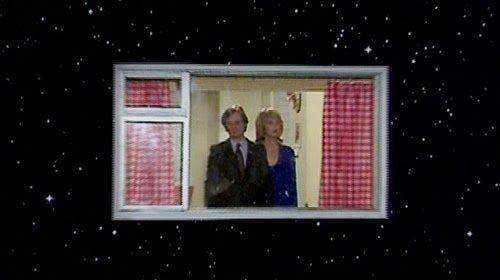 Featured image via Popmatters.  All other images via Siskoid’s Blog of Geekery except where stated.

[1] Including just who it was who (uncredited) voiced the introduction. The most popular candidate is David Suchet, but he doesn’t remember if it was him or not.

[2] The original title for the show was The Time Fixers.

From Parable To Reality | The Matrix Reloaded 15 Years On