Dún Laoghaire Harbour’s ferry terminal will be used as Dublin’s only drive-in cinema this March. Its opening night – 15 March 2014 – features a screening of Steven Spielberg’s 1975 classic, Jaws. To coincide with this event, Padraic Coffey takes a retrospective look at one of cinema’s most enduring films. 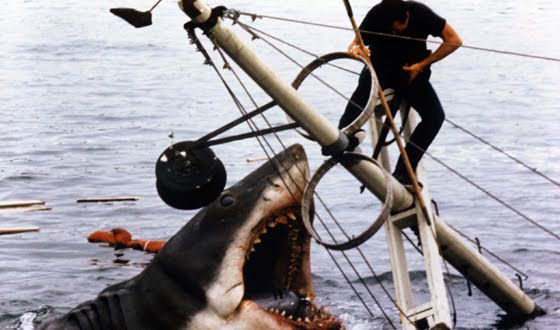 In Alex Stapleton’s excellent documentary Corman’s World: Exploits of a Hollywood Rebel, the release of Steven Spielberg’s Jaws in 1975 is seen as a pivotal moment in cinema. Jaws introduced to mass audiences a genre of film that would have previously been relegated to the drive-in theatre market, an area Stapleton’s subject, Roger Corman, dominated. As Resident Evil director Paul W.S. Anderson noted, “A killer shark eating naked girls as they go skinny dipping… It doesn’t get more Corman than that!”. Of course, if one were to concede the notion that Jaws is ultimately a B-movie in premise, one would also have to accept that Jaws is almost indisputably the finest B-movie ever made. For behind the formidable scares, which hold up several decades after the movie’s first theatrical run, there lies all that was great about Seventies American cinema: characterisation, subtlety, pacing, depth and technical mastery.

Jaws is often credited as the first ‘Event Movie’, and thus its legacy can be seen in every blockbuster that competes for attention in the multiplexes year in, year out. Though The Exorcist and The Godfather had had punters queuing up in their droves to see them, what set Jaws apart was its calculated Summer release date and family-friendly PG certificate. A look at Spielberg’s subsequent career, particularly as producer, might give the impression that Jaws is relatively gentle fare, aimed primarily at children. This would be some distance from the truth. Jaws is a genuinely terrifying experience, which offers more tension and scares than any of the gore-filled ‘torture porn’ movies that have been churned out endlessly of late. Much of its power to frighten is owed to John Williams, whose oft-parodied two-note theme is easily on a par with the Bernard Hermann’s stabbing-motif from Psycho, Mike Oldfield’s Tubular Bells, which accompanied The Exorcist, or John Carpenter’s cyclical synthesiser riff for Halloween.

Credit must be given to Spielberg himself, and his remarkable editor Verna Fields, who deservedly scooped an Oscar, along with Williams. Spielberg pays tribute to works as disparate as Alfred Hitchock’s Vertigo and Universal’s 1950s monster movie The Creature from the Black Lagoon throughout. The subjective shots from the approaching shark’s POV of agile limbs dangling in the water recall Creature. These would become increasingly popular in the horror genre after John Carpenter’s Halloween, three years later, and so Spielberg can claim to have contributed something to the slasher film. He also references the famous disorientating ‘Dolly Zoom’, popularised in Vertigo, for a scene in which Chief Brody (Roy Scheider) witnesses the mauling of a child. It is worth noting that this truly shocking moment occurs less than twenty minutes into the film. Spielberg wastes no time in establishing that his environment is one in which no character’s safety is guaranteed.

It would be easy to list one memorable moment after another as evidence of how well Jaws holds up to this day, but reducing the film to a series of set pieces does a disservice to the wonderful humanity at the film’s core. Scheider is superb as the aquaphobic policemen relocating on Amity Island to escape New York’s notorious crime rate, only to face a more daunting task than he could have expected, while Richard Dreyfuss, still a rising star, injects much of the film’s comic relief as the well-off oceanographer Hooper. The finest performance, however, is that of Robert Shaw as the cantankerous Quint, hired to capture the shark in the film’s dynamic third-act at sea. That Shaw did not so much as receive a Best Supporting Actor nomination is among the Academy’s many egregious blunders. Shaw’s now infamous monologue, detailing his experience aboard the doomed U.S.S. Indianapolis, is one of the outstanding moments of both his and Spielberg’s career. Few filmmakers today, assigned the task of delivering a momentous summer blockbuster, would allow their audience the respite for such an expertly acted, dialogue-driven scene.

Such is the authenticity of the world Spielberg and screenwriters Peter Benchley (adapting his own novel) and Carl Gottlieb create that even very minor characters – such as the opinionated Town Council member Mrs Taft, and the eccentric local fisherman Ben Gardner – appear to exist outside of the immediate story. Unlike Star Wars, by Spielberg’s cohort George Lucas, or even The Godfather, Jaws remains one of the most popular films of all time in spite of, rather than because of, its sequels. Three more entries in the series would follow, without the input of Spielberg or Benchley, yet none are regarded with any great level of respect by committed fans of the original. Spielberg, still in his twenties, would strive to better this sophomore effort throughout his career, perhaps only achieving it with 1993’s Schindler’s List. In any case, Jaws is as exhilarating, menacing and downright beautiful today as it was nearly forty years ago.

Padraic Coffey holds an MA in Film Studies from University College Dublin. In addition to HeadStuff, he has written for a number of publications, including the Sunday Independent, UCD's University Observer, Film Jam and Volta.
He tweets @Padraic_Coffey