The Marvel Cinematic Universe has already spread into the world of television and it is getting bigger. Much bigger. Some already known characters from the Marvel world will be gracing our screens for a new series  and a renewed series and Netflix has done it again; given us all something to look forward to.

Agents of S.H.I.E.L.D, created by The Avengers director Joss Whedon, has its UK and Ireland season 1 finale this week and news has just come through, earlier this month, that it will be back for season two. Although slightly cheesy and without the high budget action from the movies, I have really enjoyed the first season of AoS. The finale was good and leads us into the next stage with more questions needed to be answered and more to get excited about. If you have not seen the show I urge you to give it a go; it is popcorn TV and full of humour, twists and turns. It also matched up beautifully with the ongoing Cinematic Universe and so if you watch the movies as they come out you get the added bonus of some additional information/back stories etc. Following, the great, Clark Gregg as Agent Coulson and his team through the fallout from The Avengers/Loki war in New York, The Dark Elves’ impact to London (Thor: Dark World) and the crumbling of S.H.I.E.L.D. in Winter Soldier, all the more to nerd out to. Season two will be shown on the ABC Network in America from “Fall 2014” which is Autumn to the rest of us. I’m guessing Channel 4 and RTE 2 will pick them up shortly also, as they ran the first season this side of the water.

The ABC Network has also agreed terms with Marvel for their new spin-off series Agent Carter. You will know Agent Peggy Carter (portrayed by Hayley Atwell) as the love interest of war-time Captain America in The First Avenger. I feel this show might have the legs to do good things. There was a Marvel One-Shot (short movie) of the same name on the Iron Man 3 Blu-Ray release and it had a great set-up for Carter moving from the Strategic Scientific Reserve to set up S.H.I.E.L.D.. ‘The Howling Commandos’, the ragtag bunch of fighters helping Captain America in the prison break are an old favourite of Marvel fans and seeing as this will be set in the years after WWII it may be a great way to get the gang back together and get some howlin’ action in. Of course there will also be Iron Man’s father Howard Stark (portrayed brilliantly by Dominic Cooper in The First Avenger) to develop crazy inventions and there will probably be a lot of throw-backs (or is it throw-forwards?) to on-going present day films/series’ tech. Peggy was a strong female character in the first movie and it should be an interesting look at the life of a 1940’s woman in the male-centred world of national security.

Now for the VERY EXCITING NEWS:

Netflix and Marvel are joining forces to deliver four, 13 episode, series and a mini-series combining the four title characters (Daredevil, Jessica Jones, Iron Fist and Luke Cage) as ‘The Defenders‘. This news has been making the rounds online for some time now so you probably have already gone out and read all the relevant material to get to grips with the vast back-stories and layered connections within the characters chosen for the monumental TV event… no? Oh. I thought I was getting through to you people…

If you are one of those people who would be of the disposition to read the book before the movie comes out or raced through the Game of Thrones books before the new season started; I have complied a few comics/graphic novels to sink your teeth into.

Please note: These are not for kids. Seriously… do not let your kids read these. 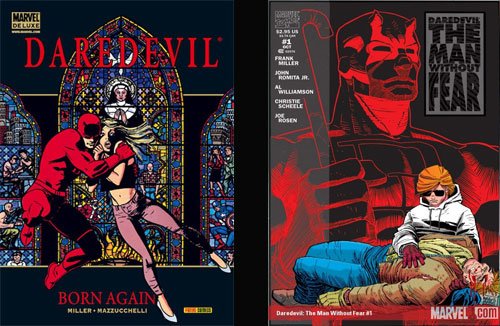 Easily the best known of the 4 title characters, (unfortunately) mainly, due to the Ben Affleck movie of 2003. This should not be your introduction to Daredevil. Do yourself a favour and pick up Frank Miller’s Daredevil: The Man Without Fear

. You will know the name Frank Miller from his work as the creator of Sin City and his dark take on the comic book world and he gives the Daredevil reboot a darker, gritty twist. The Man Without Fear gives a beautiful retelling of the origin story and Matt Murdoch’s less than pure start as a superhero and his introduction to Elektra. Born Again has another wonderful tale of insanity and depravity as Daredevil takes on The Kingpin. I would highly recommend reading them and in that order, even though Miller’s Daredevil origin tale came after the release of Born Again. 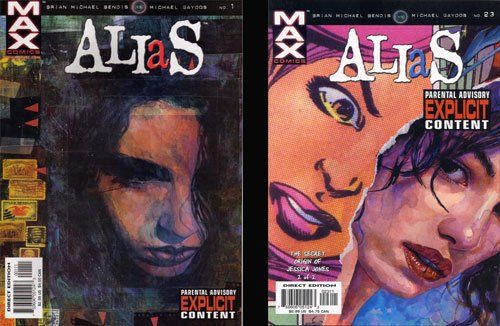 by Brian Michael Bendis is by far one of the freshest comic series I have ever read. A brilliant talent for dialogue, Bendis brings a rare strong female lead character to the forefront of the action and it is brimming with anguish and emotion. Winner of the Harvey award for best new series in 2002, this collection introduces an ex-superhero now private eye with an attitude problem and a filthy mouth. Jessica still retains her powers but chooses not to use them (most of the time). With big name players dropping in and her origin story all wrapped up into this omnibus, it is a great read from start to finish. The Purple-Man issues are my personal favourites. Her story continues on in The Pulse and ties in nicely with other Marvel characters. Although Jessica Jones is the least known of these four, if she is cast properly this could well be the most interesting and captivating of series. 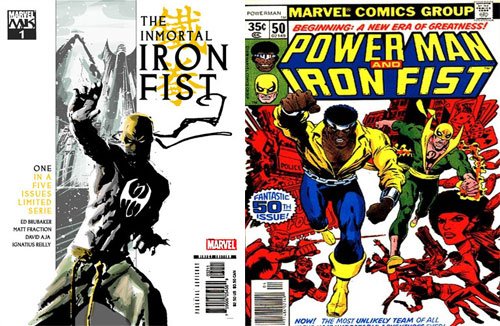 Iron Fist has a pretty cool origin story involving a disappearing mystical temple, wolves, death and a dragon. With his martial arts inclinations getting the right man for the job will be essential for this series to work. As solo Iron fist storylines go I would really recommend the first two volumes of The Immortal Iron Fist written by Ed Brubaker (who has written great arcs for Batman, Captain America and the X-Men) and Matt Fraction(The Invincible Iron Man, Hawkeye); Volume 1: The Last Iron Fist Story and Volume 2: The Seven Capital Cities of Heaven (collected nicely with extras in the Omnibus Volume 1

). It deals with the history of the Iron Fist title and those who came before our hero, Daniel Rand, and his battles with other “Immortal Weapons”. With lots of epic fight scenes they are a good read and fun to frantically flick from kick to cartwheel to the inevitable devastating Iron Fist. Rand’s adventures are probably best known for his team up with Power Man, otherwise known as… 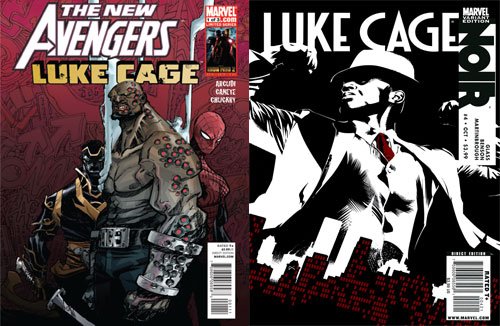 Luke Cage (aka Power Man) has been teamed up with Iron Fist for a successful run as “Heroes for Hire” from the late 70s in the Power Man and Iron Fist run. They were joined by regular supporting characters Colleen Wing and Misty Knight, who very well may feature in the series. Although there are some great story arcs in the Power Man and Iron Fist series (#50 ‘Freedom’ being a fan favourite), I would recommend reading some of the later comics to get a feel for the real Luke Cage. In the earlier comics Cage was somewhat of a stereotypical Blaxploitation lead character. There are a lot of “jive turkeys”. The Pulse

is where you will get excited for the possibilities in store for the Marvel Cinematic Universe in the future. As a side note, I would recommend the Luke Cage: Noir

short series by Glass and Benson. It is beautifully drawn and a great take on the bulletproof Avenger. 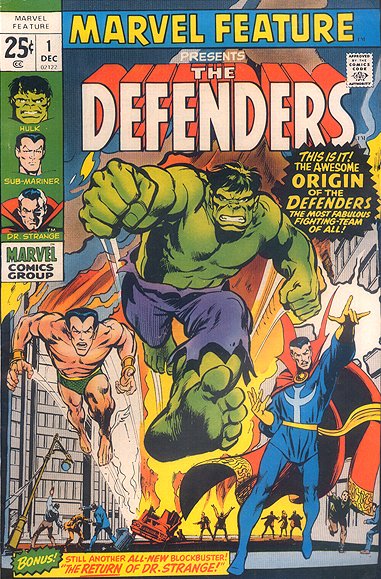 The possibilities of the mini-series The Defenders are vast. The Defenders are a team of superheroes which have changed often over time (just as The Avengers in the comics). The Defenders have regularly featured The Hulk (would love to see more Ruffalo), Dr. Steven Strange (already mentioned in the movies), Namor the Sub-Mariner (feature has been mentioned over the years), Ghost Rider (possible reboot?), Hawkeye (remember him?) and Yellowjacket (Hank Pym – to feature in Ant-Man); the possibilities are limitless.

Hopefully I can pull some of you away from your Dickens or Salinger or whatever it is you kids are reading today to get a little taste of the world of Marvel comics. I would be more than happy to recommend more if you want, so hit me up on Twitter @Paddy99a. Also new Guardians of the Galaxy  trailer out now which gives the first look of Glen Close as Nova Prime and the first uttering of “I am Groot”.