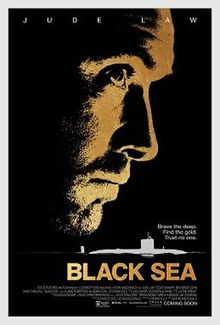 Director Kevin Macdonald has made some fantastic films over the years, including a number of outstanding documentaries (the Oscar winning One Day In September, Marley and the utterly astounding Touching the Void) but in recent years his skills as a filmmaker have been directed toward the fictional side of things with the likes of State of Play, The Last King of Scotland and The Eagle amongst his collection, to varying degrees of success.

His latest offering is Black Sea, which stars Jude Law as a Scottish submarine captain who has recently been fired by his salvage company bosses. With the doom of a life on the dole ahead, he and a couple of ex-salvagers come up with an audacious plan to find a rumoured sunken Nazi U-Boat filled with gold, which sits on the bottom of the Black Sea. A collection of despicable and world weary sailors are assembled as they board an old Russian submarine and head for the depths of the ocean.

Like all films based in a submarine, director Macdonald emphasises the claustrophobic nature of the vessel as a means to enhance the tension inherent in the sailors within and although it has been done before, Black Sea achieves this tension nearly immediately. It may not be a patch on the likes of Das Boot but Black Sea does not need the likes of depth charges or torpedoes to wrack up the tension, instead, well designed sets and the desperate nature of the characters involved help to build the tension. Ironically, one of the most tense scenes in the film actually happens outside the submarine. The cast includes Michael Smiley, who was fantastic in Kill List, along with Ben Mendelsohn who is brilliant in everything and Scoot McNairy who is quickly becoming an actor to watch in Hollywood. While these characters are well portrayed, it is the rest of the sailors who unfortunately slip into blandness without any real personification obvious, and as the film reaches its climax many of these characters lose any relevance or emotional connection with the viewer. I also have to mention Jude Law’s accent because it is terrible and is deserving of getting a one hamster deduction on what is overall a worthy addition to the underwater world of submarine films. 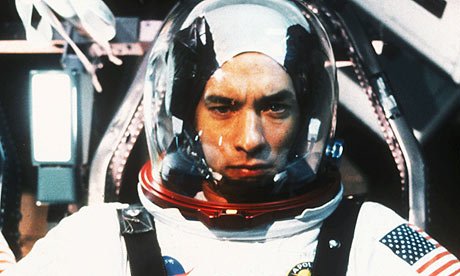 The story of the ill-fated Apollo mission that nearly didn’t make it home (woops… spoiler) is portrayed with the rose-tinted glasses of Hollywood set to full rose-tint and stars the ultimate icon of sentimentality, Tom Hanks, as the leader of the blighted mission.

Apollo 13 is one of those films that you can just watch over and over. It hits all the right notes in terms of action, suspense, sentimentality, pacing, acting and drama. It was nominated for 9 Oscars, winning 2 and has become a regular in the late afternoon, weekend slot on TV or highly coveted mid-afternoon Bank Holiday slot and deservedly so. Ron Howard has made a career out of these types of films which are well crafted stories of grandeur but ultimately super safe projects that can guarantee an audience, a few A-list stars and a few million dollars. In fact I don’t think Ron Howard has made a film that really pushed either his own boundaries, or indeed the boundaries of the audience. If Ron Howard embodies this as a director, then Tom Hanks probably embodies it as an actor and it is no coincidence that he has starred in a number of Howard’s films over the years. With the exception of perhaps, Cloud Atlas and Philidelphia, Tom Hanks has chosen his films with a certain amount of sanctuary from any negativity and in doing so, has made himself one of the most liked Hollywood stars of today. All that being said, Apollo 13 is a great movie that straddles the achievements of the fine men at NASA while making you remember that a great story told well can sometimes be better than a mad story told brilliantly. 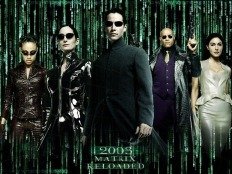 The Wachowski siblings really broke the sci-fi mold with The Matrix, released in 1999 (that’s 15 years ago). Although some of the concepts were not exactly original and some believe were stolen from other sources, like the fantastic Japanese anime Ghost in the Shell and 90s sci-fi gem Dark City, yet, it was The Matrix that really captured the imagination of the audience with it’s super stylised look, thoroughly conceived action sequences and high-concept themes which delved into the spiritual, the mechanical and the vague idea of control. To top it off, it was a huge box office hit and has raked somewhere in the region of half a billion dollars. So, with that in mind, the Wachowskis (and probably more importantly their production company overlords) decided to put pen to paper and turn the story of Neo vs. The Machines into a trilogy.

The first sequel released was The Matrix Reloaded and picks up 6 months after the climax of the first film. Neo is some sort of demi-god to the remaining humans free of the control of the matrix, and thus must go on a quest to stop the obliteration of the last remnants of human kind by the evil machines. The story is terribly convoluted and even now that I know what the word “ergo” means, it is still tough to figure out exactly what is being said half the time. But much of that is besides the point, oddly enough. The film’s strengths come from the action sequences and special effects that made the original film such a huge hit. The free way chase scene is fantastic and the story is built to facilitate these types of scenes so you do not have to wait long before another sequence of slow motion jumping and general violence occurs. It was noted however that the huge fight scene with the multiple Agent Smith’s looks like it used the same special effects you see in a modern iPhone app which just shows how long ago these films were made. The third film in the trilogy, The Matrix Revolutions (which is on TV this week), came out only three months after this and was pretty much an utter failure that really bit off more than it could chew, but this film still has a lot of the qualities inherent in the first film, but just not quite as good.

The ExhibItionist | 5 | THE PARALLAX VIEW