Netflix News | 2 | When Do You Get Hooked on a Show? Iris, Marvel’s Jessica Jones & More

All your Netflix news in one place. This week I look at when you got hooked on a TV show, get excited about Marvel’s follow-up to Daredevil and guide you through four new additions to the growing Netflix collection.

When Were You Hooked? 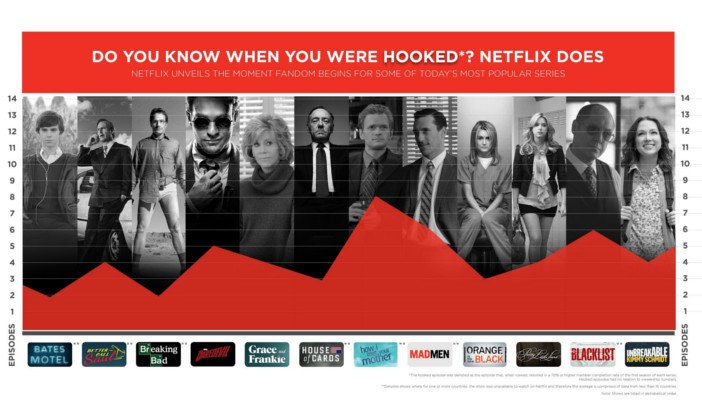 When does fandom for a TV show begin? Is it the first moment you put on a TV show or is it way, way in?  Netflix knows and unveiled the moments we were hooked on some of today’s most popular series. From Jesse and Walt’s flip of a coin over Krazy 8 in Breaking Bad (episode 2) to Crazy Eyes’ throw of a pie in Orange is the New Black (episode 3), each show has its own rhythm to reach that tipping point of true fandom and you know you are all in.

Netflix have gone through the data from their shows to see just when it is you decide you are going to stick with a TV show. Without the ads and being able to watch a show at your own pace.

Interestingly it was never the pilot episode, many were as early as the second but some were as late as episode 6.

There were a few surprising entries in their findings with Marvel’s Daredevil racking up 5 episodes before people got hooked and 4 episodes of Breaking Bad’s prequel Better Call Saul.

Did it take you a while to get hooked on one of your now favourite shows? Let us know in the comments.

One of the shows I’m most excited about this year, Marvel’s Jessica Jones is coming to Netflix on 20th November and will follow Marvel’s Daredevil in the comic-book franchise’s TV takeover. The second of the original Netflix/Marvel collaboration will focus on the little-known Jessica Jones. Jones is an ex-superhero private investigator who is trying to deal with her PTSD, drinking problem and complicated romantic life. The character was brought into the public domain when Brian Michael Bendis’ Alias hit the shelves in 2001. It is a fantastic read and with an impressive cast of Krysten Ritter (Breaking Bad), David Tennant (Doctor Who) and Carrie-Anne Moss (The Matrix) this is sure to live up to the Marvel hype.

Check out the teaser trailer below.

Jane Fonda, one half of Grace and Frankie, and Linda Cardellini, from Bloodline, have a sit down and a little chat about each others show, balancing work and family and what advice they would give young actors. A lovely little video, Netflix decided that the best way to promote two of their own Original series is to get their stars just to have a bit of banter. And it works, I was definitely sucked in.

Earlier this year there was sad news as the fantastic documentary director Albert Maysles (Grey Gardens) passed away. One of his last features was the delightful Iris, and it is now available for you on Netflix.

Iris pairs the 87-year-old Maysles with Iris Apfel, the quick-witted, flamboyantly dressed 93-year-old style maven who has had an outsized presence on the New York fashion scene for decades. More than a fashion film, the documentary is a story about creativity and how, even at Iris’ advanced age, a soaring free spirit continues to inspire. Iris portrays a singular woman whose enthusiasm for fashion, art and people are life’s sustenance and reminds us that getting dressing, and indeed life, is nothing but an experiment.

I’m a superhero nerd. I have written many a thousand word on this site to back that statement up. The Thor sequel is now up on Netflix and is a super enjoyable follow-up to the Asgardian hero’s solo movie. Taking place after the first Avengers movie, we are introduced to an old enemy of Odin and the people of Asgard; the Dark Elves. Our hammer-wielding hero must team up with an unexpected ally to make sure the Aether doesn’t fall back into the hands of the ancient, evil race.

With all the familiar faces from the first Thor film the sequel focuses on life in Asgard rather than Earth and brings a different dimension to the MCU. Well worth a night in with a mound of popcorn.

From the director of movies I never heard of, comes a movie that looks like hundreds before it….so what the hell am I writing about this for?

Well I haven’t actually seen Skin Trade yet but it has Dolph Lundgren (Universal Soldier) teaming up with Tony Jaa (Ong-bak) and Michael Jai White (Spawn) to take on Ron Perlman (Hellboy). That’s a pretty impressive cast, at least when you want a whole load of explosions and killer lines like “Negotiation, Over” as Tony Jaa drops some poor fecker off a hotel balcony. There are going to be great fight scenes, plenty of people being thrown through glass and walls and stuff and then Dolph will grab a gun with unlimited bullets and far too much firepower. I have a feeling it’s going to be great – in a Commando kind of way. I’m going to watch it anyway, I like me some trash sometimes.

Far from the mind-numbing bedlam of Skin Trade above, Spring made the rounds and got a lot of attention as one of the independent films to catch last year. A mix of romance, horror and science fiction, Spring starts slowly but not in a bad way. The film’s pace and overall sense of calm is key to the progression of the characters’ relationship and as hints towards Louise’s secrets are revealed it feels more like we were lured in with this sense of security when in reality we were in the eye of the storm. The trailer gives quite a bit away but still will leave you intrigued enough to sit down and watch one of the more original films available on Netflix. This is why independent cinema should never be overlooked.

[youtube i[youtube id=”PhNY1SVHLD0" align=”center” autoplay=”no” maxwidth=”702"]pefully there is something there for everyone. Hit me up in the comments for your Netflix hidden gems and recommendations, or you can catch me on twitter @Paddy99a.

Exhibitions: October brings “Without a Future”, “Journeys”, and “House Portraits”