The second season of Breaking Bad spin­off Better Call Saul opens once again with the inevitable future of Jimmy McGill, aka Saul Goodman (aka briefly Viktor St. Clair in this opening episode). He is wearing an ill fitting Cinnabon managers badge and equally ill fitting moustache living out an anonymous life in a mall somewhere in America. It’s a statement of intent by the creators to the viewers. We know where he ends up and we know you know where he ends up. The destination is set in stone, the journey there is not so. 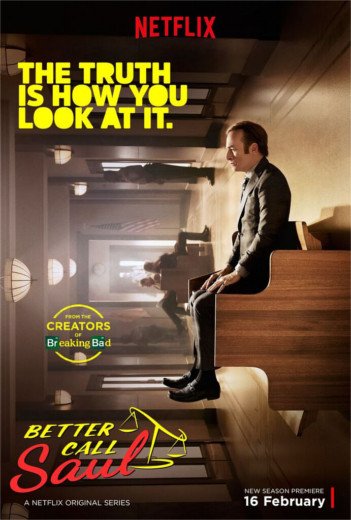 The first season of Better Call Saul was very well received critically and with fans of the original Breaking Bad series. I found myself initially wondering if this would be a case of over egging the omelette. When it was first announced so soon after the finale of Breaking Bad I thought that the enthusiasm and love for these supporting characters was making it happen all too quickly and comparisons with its parent show would be hard to avoid. Would it be better off leaving that whole world alone and not potentially ruining the supporting characters by unnecessarily looking into their backstories?

A good model for a spin­off show that succeeds in its execution is the Cheers spin­off Frasier. The reason that show worked so well is because the main character of Frasier Crane is in a different environment (Seattle instead of Boston) to the original show and is supported by characters who are as interesting as he is, namely his brother, Niles whom he competes with and a father he struggles to connect with. Better Call Saul is set in the unknown environment of the past and Jimmy McGill has a brother, Chuck, whom he idolises and constantly struggles to gain the respect of throughout the first season. His good friend Kim is also a motivating character for Jimmy. He values her opinion of him and she makes him question the direction his life is taking by suggesting he can’t just wander aimlessly looking for opportunities to just present themselves “like Jules in Pulp Fiction”.

Once again this opening episode is a slow burner which was something that some people remarked as a negative aspect when the first season was released onto Netflix. Perhaps this was down to the week by week release of each episode as opposed to the entire series dump that usually occurs with the majority of shows these days. Not being able to binge watch it all in one sitting may make the show seem slow but it’s not really concerned about an overarching plot line that runs through the entire season, it’s a character study and the characters are compelling. I remember one of the more popular episodes of Breaking Bad featured Walter hunting a fly and not much else. But Walter was such an interesting character you found yourself riveted.

Check out the rest of the Netflix Original series returning in 2016 here.

Oscar Watch | Why The Martian Should Win Best Picture

A Friendly Chat With Lisa Casey