Typically this would be a week for my Supermovies news, not Netflix, but it is time for a crossover. Marvel’s Jessica Jones debuts worldwide on Netflix this Friday (20th November). Here I hope to introduce you to the source material, Brian Michael Bendis’ Alias, the characters involved and let you know why this could be one of the most important Marvel pieces to ever hit the screen.

So let’s start with the premise.

Jessica Jones is an ex-costumed hero with a certain level of enhanced powers who has packed it all in and set up as a private investigator under the title ‘Alias Investigations’. Jessica is a heavy drinker and is dealing with PTSD resulting from a traumatising and personal attack years before. 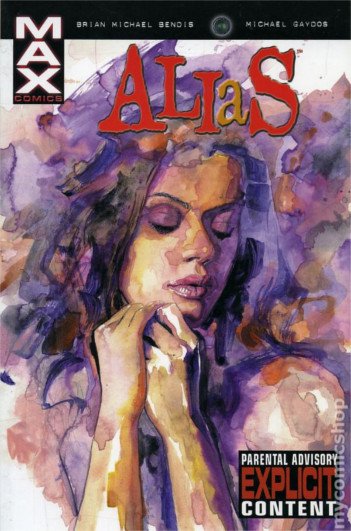 I got my hands on a copy of a little known graphic novel named Torso some years ago. It was something that I wasn’t used to, a comic book without superheroes. It was a crime novel, in comic book form and it was fantastic. “Written by Brian Michael Bendis, huh? I should check out more of his stuff” I said to myself. So I did.

Brian Michael Bendis has penned some incredible titles and I could write a whole article about all of his work that you really need to get your hands on (his run on Daredevil with Maleev, Jinx, Powers and more) but ultimately I am here to talk to you about one, Alias.

Alias (nothing to do with the Jennifer Garner TV show) came out in 2001 and ran for 28 issues up to 2004 under the newly formed MAX imprint releases of Marvel. MAX comics were a new “Adults Only” section of the Marvel house. They dealt with mature themes, used profanities often and featured sex and violence on a regular basis. They weren’t really able to use the Marvel big-hitters such as Spider-Man or Iron Man (in case the kiddies picked them up) so they took to characters like Blade, Luke Cage, Deadpool and, in their very first release, Jessica Jones. 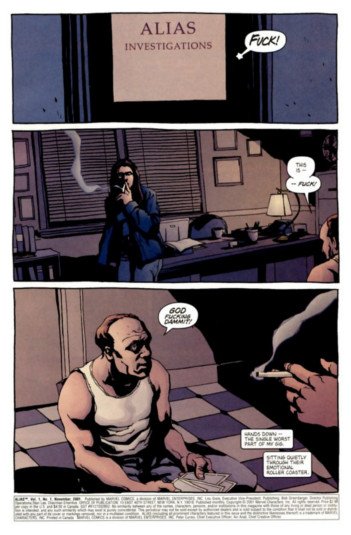 I remember opening the first issue; first page, first word ‘Fuck’ – that’s one way to kick off your new adults only series. On the first page there were three ‘fuck’s. This was going to be interesting. As I read through the series I was often taken aback by the brashness and straight talking Jones, by the sordid torture led by the villainous Kilgrave and by the matter-of-factness of the sexual scenes and abuse of alcohol.

So how close does the new Netflix series follow the source material? Well pretty close to be honest. At least as close as you would expect/want from turning the 28 issues into a 20 episode series. The drinking is rampant, the language is coarse and the tone is both beautifully and horrifically gritty. This is the most R-rated Marvel has ever gotten and that is a very good thing. Alias, under Marvel’s MAX imprint, was not for kids. Explicitly so. Netflix’s Jessica Jones isn’t either. Comic books are not (just) for kids. Their TV counterparts should be reflecting this.

Our Cast of Characters:

Jessica Jones instantly became one of my favourite comic book characters upon reading Alias, not because she is very likeable, but because she wasn’t. Jones is a tough nut to crack. Obviously dealing with major issues from past trauma, Jessica’s battle with alcoholism, self-esteem and self-identity issues make her one of the more complex characters in the Marvel universe. Not the type of complexity you get with some old-school characters, where you are not quite sure who their father is but it could be this other superhero who came from the past, but is actually a god, but it’s more than likely Magneto etc etc, Jones is real-world complex. And that hyphenated duo right there sums her up; real-world. Sure she has some super powers and knocked about New York trying to catch bad guys, but where we find Jessica at the start of Alias, and at the start of the show, is in a very real place. Depressed, paranoid and alone. She finds it hard enough to be around herself, never mind her would-be friends or neighbours. It’s so hard to like her due to her hard exterior and aggressive front but at those moments when we see Jones for who she really is, it becomes heartbreakingly obvious that she is just like everyone else, superpowers or no superpowers.

Krysten Ritter executes the balance of Jones brilliantly in the new series. Her not-giving-a-fuck attitude is spot on and has the tone and demeanour of Jessica, from Alias, down to a tee. Likewise, when battling the emotional parts of the script her paranoia and fear are palpable. 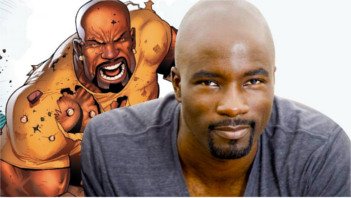 It was no secret that the Hero for Hire, Luke Cage, was going to be in the new Netflix series. He features heavily in the Alias series and is already set for his own Netflix Original series in 2016 (along with Daredevil Season 2). His place in the series has changed quite a bit from the comic book however. He is still the mighty Luke Cage we all know (well some of us do) and love, just the story arc has been redone. In Alias, Cage is a bodyguard for Matt Murdoch (aka Daredevil) and a frequent booty call for Jessica Jones, typically a very drunken booty call. In the series, we find Cage managing a bar and trying to stay out of trouble. He has his demons and seems to be trying to keep his head low until he figures them out. In the show he is portrayed by Mike Colter who has appeared in Zero Dark Thirty and most recently TV’s The Following, alongside Kevin Bacon, however this is his biggest opportunity to make a name for himself.

Throughout Alias, we are gifted to some great back-and-forth between Jones and Cage as they try to figure out what exactly they are. Turns out they are just “two adults”, doing what consenting adults are very much allowed to do. I 100% will not go into anything else to do with his involvement in the show however as the script change from Alias to screen is significant and spoiler heavy.

Kilgrave (aka The Purple Man)

The main antagonist of the Alias series is one of the creepiest and immoral villains that the Marvel Universe has coughed up. He has the power to make you do anything. Plain and simple. If he tells you to give him all of your money, you just hand it over and act slightly confused about why you just did that, it feels like you wanted to do it but don’t necessarily understand why you did it. If he asks you to strangle your dog, run in front of an oncoming train or take off all of your clothes, same outcome. This can be used for an unprecedented level of creepy.

If he wants anything he takes it, be it of value or of flesh. He also has something of a soft spot for Miss Jessica Jones. In Alias, Kilgrave is an actual purple man, hence the name. In the Netflix series, he is not, he is however played by the fantastic David Tennant (Dr. Who, Broadchurch). Tennant’s portrayal of Kilgrave is outstanding. He gives you the chills every time he is on the screen. He’s both brilliant and sick at the same time. He has become obsessed with causing Jessica undue torment and torture of the highest degree. He is already in her head but (in your creepiest inner-voice) he wants to get under her skin. *shivers* Yeah, he’s good at being bad, and it is excellent to watch.

Netflix were kind enough to give me a preview of the first seven episodes of the new series and I am eagerly awaiting the release of all 13 episodes this Friday (20th November) where they stream worldwide on Netflix. If you loved the direction Marvel took in the dark and gritty Daredevil  series, you will love this next addition to the team. Hopefully the partnership of Marvel and Netflix will grow from this and with Luke Cage and Daredevil Season 2 coming out next year, as well as Iron Fist and The Defenders planned for the coming years, the future is bright (yet fantastically dark) for us more “mature” Marvel fans.