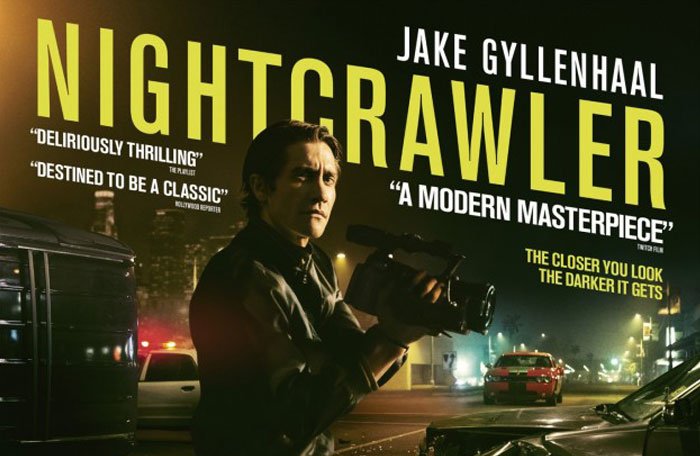 Gyllenhall plays Lou, an ambitious, broke scumbag in LA who starts working in the world of ‘Nightcrawlers’. These are freelance camera crews that chase accidents and murders in the hope of selling grisly footage to cable news stations by morning. Lou shows a natural gift for getting up close with the more nightmarish aspects of the city at night, all in the hope of scaring the shit out of people at breakfast. The plot develops as he pushes further and further into situations that decency would bar most people from. It’s his complete lack of ethics that gives him the edge. He exploits people’s fears, he exploits an intern economically and in one particularly awful scene he exploits a desperate woman for sex.

From the opening credits it’s clear the territory we’re in. LA twinkles like a beautiful gutter, slide guitar plays and the words ‘Bill Paxton’ pop up on screen. It feels like an 80s B-movie in the best possible way. At times it’s also reminiscent of Taxi Driver, Peeping Tom and a host of other stories about people with broken minds creeping through the night. It’s a a slasher film with machetes replaced by zoom lenses. The focus on cable news feels oddly anachronistic. The internet doesn’t really get a mention in terms of how news is gathered and dispersed. You can forgive it that because this anti cable news screed offers the chance for lots of vicarious thrills. Even as we condemn Lou we keep watching.

Tense, fun and disgusting in both the visceral and moralistic sense; this is a wonderful horrorshow.

Nightcrawler is released in Irish cinemas on Halloween.