We watch from across the street as a young man asks a middle aged woman for directions. He gestures to his ears, indicating that he is deaf. She points him towards his destination and he moves along. Throughout the scene the camera remains static as cars pass by constantly in the foreground of the frame. With this opening scene writer and director Misolav Slaboshipitsky defines the relationship between viewer and subject that he continues to explore over the duration of his two hour plus feature length debut. 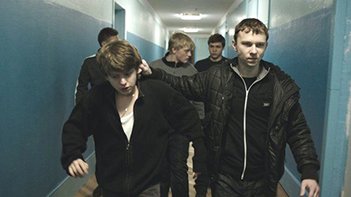 There is nothing particularly original about the narrative of The Tribe. The story concerns a young man who falls under the influence of a violent criminal gang in a school he has been enrolled in. What makes the film unique and what the majority of discussion around the film will focus on, is that all of the actors on screen are deaf and communicate entirely through sign language. There are no subtitles provided for the viewer.

The simplicity of the narrative and the uniqueness of its presentation go hand in hand. All of the relationships between characters can be read and understood through gesture and body language. The things that motivate those relationships, the desire to express power and claim agency in a world which you are ignored and have been abandoned, the release from boredom through violent and sexual acts as well as the dream of escaping the grim world the story takes place in can all be understood on a basic human level.

Ultimately the decision to exclude traditional dialogue and text encourages the viewer to engage with the film primarily in terms of its visual construction. This is where its strengths lie and also where its weaknesses become most apparent. Slaboshipitsky uses patient steadicam movements interspersed with long, unbroken takes framed in wide angles to tell the story. The effect of this is for the most part mesmerising. The use of wide framing and natural light serves to create a powerful sense of reality to the world. Consequently the unbroken editing and the exclusion of music highlight the staging and performances to such an extent that any flaw becomes magnified. In these moments the sense of reality the filmmakers strive to create is broken.

There are similarities to the work of Gaspar Noe in how violence is depicted in the film but there are fundamental differences in what is being said on the subject of violence. The back to front structure of Irreversible (2002) operates on some level as a commentary on the wholly destructive nature of violent acts and the impossibility of redemption through retribution. The message here is one of despair but despite the brutality of the film there remains an idea of a time before and a sense of something having been lost.

The Tribe offers no comfort to the viewer. The brutal violence that occurs is not being framed in any way. It feels inevitable to the point of becoming almost mundane though it remains visceral and disturbing. This speaks to the overall experience of the film. The viewer never feels emotionally engaged with the characters because we are not expected to. The exclusion of traditional dialogue reinforces this idea. Though we see them at their most desperate and savage we still feel as if we are watching from across the street at two strangers speaking to one another. Cars pass by between us, drowning out the sound of their voices.

Jonathan Sammon is a visual artist and film-maker. He tweets @SCANALYSER