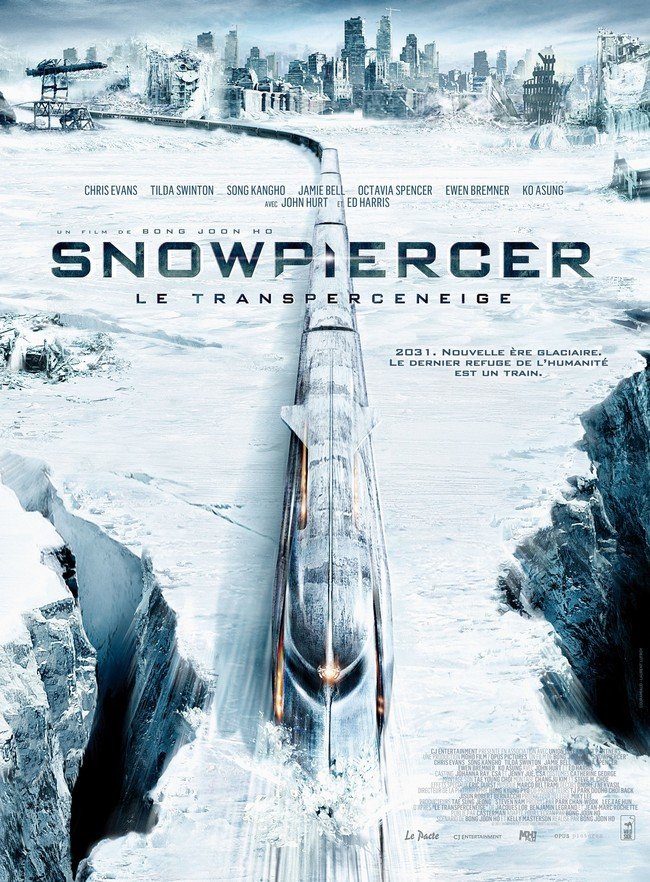 It’s the future, and the earth is a cold dead place.  After a global warming reversal experiment goes wrong all life on earth is frozen and has been for seventeen years, with the exception of those who live aboard a train, the titular Snowpiercer.

The Snowpiercer is a perpetual-motion powered train that circles the globe on an endless loop, and those “lucky” enough to have survived now live in a rigorously maintained class system with the rich and powerful at the front, and the poor and worthless crammed into the rear.  Amongst these worthless rear passengers, and sick of the injustice and inhumanity of life on board the ark-like train, are Chris Evans and John Hurt, social rebels with a plan to take control of the train by going all the way to the front.

Based on the French comic Le Transperceneige by Jacques Lob, Benjamin Legrand and Jean-Marc Rochette, and directed by Bong Joon-ho (The Host (2006), Mother (2009)), Snowpiercer is the first English language film by the much-noted Korean filmmaker and boasts a very impressive cast alongside Evans and Hurt, including Tilda Swinton, Jamie Bell, Ed Harris, Ewen Bremmer, Alison Pill, Octavia Spencer and Song Kang-Ho.  Often it’s the case that when highly lauded foreign directors make their first foray into English language films, they lose the ability, and in many cases, the control to stamp their own unique and cultural idiosyncrasies into the grain of the film. Snowpiercer, however, reveals a director not willing to surrender his film principles and the result is highly distinctive and utterly mesmerising sci-fi analogy for the human class system and the lengths people will go to maintain control.  Littered with the odd, dark humour often seen in modern Korean cinema, and fuelled by a stunning visual palette (the ten minute fight scene with the men in balaclavas is astonishing filmmaking), Snowpiercer attempts to ask much deeper questions about the role of societal hierarchies as we know them, and whether humanity can survive the confines of these systems when condensed and magnified within the claustrophobic walls which protect the survivors from extinction.

As Evans leads his band of rebellious under-classers through the train, the nature of humanity is represented in all its various and somewhat repulsive forms.  Each carriage becoming less and less humane as they go, all while the leaders, embodied by a not-so-subtle and wonderfully outrageous Maggie Thatcher-esque Tilda Swinton, strive for balance, reiterating the phrase “know your place”. But in a world where existence is solely determined by social class when does the train stop being a vessel for the survival of civilization and instead becomes a prison for human existence?

The film subtly sheds it’s formulaic logic, and replaces it with visceral and surreal imagery, underpinned by that dark Korean humour and a brilliant lack of sentimentality.  In many ways it is a story that would not have worked in the hands of a more traditional Western director, and Bong Joon-ho has made a film worthy of his Korean film heritage.  Snowpiercer still does not have a release date for Ireland but if you see it listed, don’t miss an opportunity to see this perfectly single view of the world.

Each Other – Being Elastic

Die Hard With A Vengeance Turns 25 | Does Anyone Care?