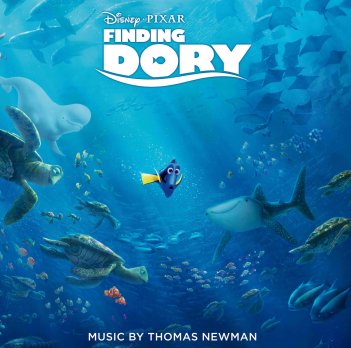 Thomas Newman delivers his signature range of musical colours and orchestral flair in one of 2016’s most anticipated animated feature films, Finding Dory. Pixar giant Andrew Stanton directs his long-awaited follow-up to the aquatic adventures of Finding Nemo (2003), reuniting audiences with beloved clownfish Marlin and Nemo. However Stanton’s sequel sees the lovable amnesiac Dory (Ellen DeGeneres) take centre stage as she embarks on a quest to find her parents. Her efforts find her captured and taken to a public aquarium in California from which Marlin and Nemo must try to rescue her. Predictably, Finding Dory is an emotional rollercoaster, forcing composer Thomas Newman to provide an ample musical palette. Newman responds with a sizeable 86 piece orchestra and a lengthy 33 track original score. His fusion of acoustic and synth-generated sounds blend with ease. His piano-based motifs are memorable and inviting. Above all else, Newman’s intricate instrumentation is warm and magical, a suitable match to the artistically animated visuals it accompanies.

Stanton once referred to Thomas Newman as “the De Niro to my Scorcese”, claiming he listened only to Newman’s scores such as The Shawshank Redemption (1994) and American Beauty (1999) when writing Finding Nemo. Newman has received 13 Academy Award nominations to date, as well as BMI’s Richard Kirk award for his significant contributions to film and television music. Finding Dory marks his third collaboration with Andrew Stanton following Finding Nemo and WALL·E (2008). Newman credits the composition of Finding Dory’s score to a six month creative process which grew from a core group of instruments including drums, guitars and woodwind. His philosophy surrounding animated features is that the range of feeling is brought out by the dialogue and that the composer’s duty is to simply underline these feelings rather than re-describe them. This concept becomes highly apparent throughout Finding Dory and the resulting soundtrack is one that ultimately sharpens the focus of the drama, rather than drawing attention from it.

Newman’s score begins with an ethereal tranquility, Finding Dory (Main Title) and Lost At Sea are reflective of this. The pieces are playful, with delicate piano triplets swimming through the composition, the audience is submerged into the Pixar universe. It is not until Dory meets Marlin during One Year Later that the score reaches any level of urgency. Newman’s instrumentation is spry and vast with the harp and flute melodies holding a particularly strong presence. As Dory journeys to reunite with her family, the propulsive nature of this orchestral score is realised. Jewel of Morro Bay and Gnarly Chop boast an array of racing string arrangements fused with funk bass and slide guitar. Newman’s sound is as mischievous as it is melodic. Squid Chase and Sigourney Weaver mark another tonal shift in the score, with piercing brass and panicked strings taking charge. This brash and menacing force marries well with the troubled chapters of Dory’s adventure.

It is worth noting that many of Dory’s forgotten memories are triggered with aural cues. For example, the crabs’ collective “shhh!” noise at the squid’s den prompts Dory to remember her parents’ names. These cues become vital throughout the film as they allow her to piece together the path to her childhood home. Newman’s score also allows for the introduction of Stanton’s new characters at the aquarium. Both Hank, a reclusive octopus, and Destiny, a compassionate whale shark are presented during Hank and Meet Destiny respectively. Of all the pieces heard throughout Finding Dory, Newman’s …Shells triumphs as the most emotive and vulnerable. His piano is delicate while the strings remain soft and fragile. The piece is fragmented and given room to breath, ensuring the onscreen drama is not overpowered. Newman’s soundtrack comes full circle as Hide and Seek and Quite a View sound a restoration of peace and tranquility, with the latter reprising the film’s Main Title piece.

Ryan Grace is an Irish broadcast journalist, writer, and musician with a passion for film music. His work looks at the use of instrumental scores and popular soundtracks in modern filmmaking. You can find him on Twitter @ryangrace__

Ennio Morricone’s Score for The Hateful Eight | A Review