I grew up in a house where westerns seemed to be the only thing on TV. My father worshipped at the altar of John Wayne and John Ford, therefore his offspring had no other choice but accept the western genre.

As I got older I discovered the films of Sergio Leone, I watched Eli Wallach with fascination, I opened my ears to the wonderful scores of Ennio Morricone, I fell in love with the spaghetti western. The Good, The Bad And The Ugly, Once Upon A Time In The West and A Fistful Of Dynamite are well known examples of a spaghetti western but there are many other films in the same genre which are largely and unjustly ignored. Most of those westerns were shot in and around the Mediterranean, in places such as Italy and southern Spain, hence the name ‘spaghetti western’. 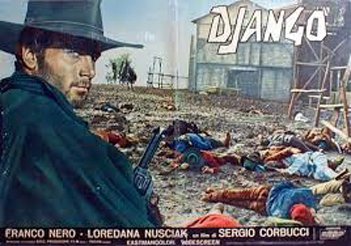 In 1960s and 70s the genre exploded and up to six hundred films were made during this golden age. Before Tarantino’s Django Unchained there was the 1966 film Django, a film deemed too violent at the time for most cinemas. Franco Nero played the part of Django, a mysterious gunslinger who seeks revenge for the murder of his wife. In Tarantino’s Django Unchained Nero makes an appearance as a slave owner who encounters Jamie Foxx’s Django at a bar. Nero asks him his name to which Django informs him that the ‘D’ is silent and Nero’s character nods with a smile “I know.”
A film now in the pubic domain is the 1967 spaghetti western Death Rides A Horse. Starring Lee Van Cleef, the plot concerns a young man who sets out for revenge when his whole family are slaughtered and he enlists Van Cleef’s character to help him in his quest. Lee Van Cleef popped up again in 1969’s Sabata where he played the role of an expert gunman. Three more Sabata films followed but it is the first film which remains the best. Van Cleef’s character Sabata comes to the rescue of a town which is being sold to the railroad but the standout character in this particular film is Banjo, an on-the-run killer who is neither with or against Sabata but carries around a banjo which conceals his gun. 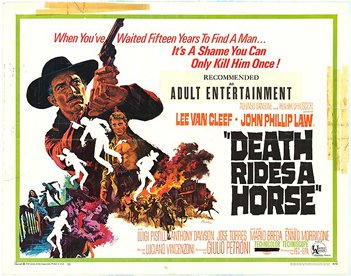 In 1972 Lee Van Cleef appeared in Storm Duel. He played a sheriff dishing out the law in the name of a man falsely accused of murder. The 1969 spaghetti western The Price Of Power starred Italian actor Giuliano Gemma and the plot consists of Gemma seeking revenge against his father’s killers while also trying to prevent the assassination of President Garfield. It sounds pretty bizarre and to be honest it is. Garfield’s wife can be best described as a 19th century Jackie Kennedy while Garfield’s assassination has all the hallmarks of the JFK assassination, including the fact that in the film President Garfield is shot dead in Dallas and not in Washington D.C which is historically accurate.

Giuliano Gemma also starred in 1965’s A Pistol For Ringo. Gemma played Ringo who gets arrested for his outlaw ways but in exchange for his freedom he agrees to help the sheriff whose fiancé has been taken hostage by Mexican bandits. The film was well received in both Europe and America notably for its musical score composed by none other than the great Ennio Morricone while the cinematography proved dusty and gritty just the way a spaghetti western should be portrayed on screen. 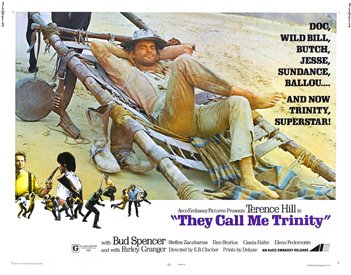 Like A Pistol For Ringo, the cinematography in the 1970 film They Call Me Trinity shows off the rawness in the badlands of the Tabernas desert in southern Spain. Terrence Hill played the part of Trinity, a dirty hobo like character who drifts into a town where his burly brother is sheriff. They team up against a greedy land baron who wants to evict Mormon settlers from a piece of land he wants. The opening music in They Call Me Trinity was in fact used as a closing track in Tarantino’s tribute to the genre Django Unchained, a fact that shows that even though many spaghetti westerns are forgotten about there is still some influence protruding from these cinematic gems.

I remember spending my communion money on a cowgirl hat and a toy Smith and Wesson rifle while my friends splashed out on things like Barbie’s dream house. I wanted to be a cowgirl and something in me still longs for life on the ranch but for now I have happily gained the habit of collecting western box sets, primarily of the spaghetti western genre, because in my house spaghetti westerns are never off the menu.

A Most Wanted Man

Andrea Balency could be your favourite