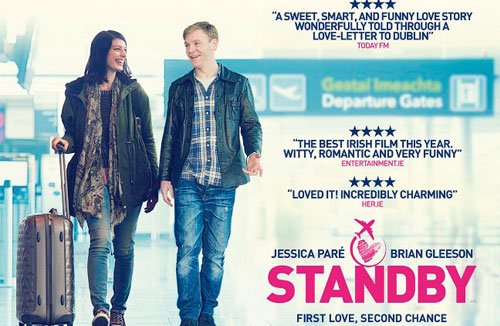 Directed by Rob and Ronan Burke

Filmmakers have often made visual poems to the great cities around the world; how many times have we seen New York through Scorsese’s eyes, Los Angeles through the work of Michael Mann or Rome through the films of Federico Fellini. Doesn’t every city deserve to be loved? John Carney’s Once presented us with a really beautiful Dublin and Rob and Ronan Burke certainly give her the poetic treatment in their latest feature, Standby. Maybe the likes of Adam and Paul and Love/Hate has shown us the darker side of Dublin but Standby proves that there’s more than just scum in this ‘ol capital of ours. Dublin at night looks absolutely stunning in this film, shot beautifully by David Grennan (Ripper Street). But is this little Irish/Luxembourg production as good looking as its locations?

It’s Valentine’s Day and Alan (Gleeson) has seen better days. He lives in his Dad’s spare room, he’s approaching 30 and trying to put the fact that he has been stood up at the altar by his bride-to-be and recently fired from his banking job behind him. His only outlet is playing rockabilly music with his two mates, Jimi and Cian. To say that Alan is stuck in a rut would be an understatement. One day, working a few part-time hours with his mother in the tourist information office in Dublin Airport, Alan comes face to face with his first love, Alice (Pare). Alice, an American, and Alan first met eight years before, when Alan was working a J1 in the States. They had a great summer of love but his promise that he would return never materialised and they lost touch. Feeling that fate has stepped in, Alan convinces Alice to stay for one night in Dublin, to let him take her around the city for a few hours and show her a good time. Will they still have anything in common and can a flight scheduling error turn out to be a second chance?

Standby is our Notting Hill, it has that kind of vibe to it. No no, come back; don’t run away on seeing the words ‘Notting’ and ‘Hill’ side by side. This isn’t a foppish, bumbling romcom boasting a lead actor where you’re not sure whether a good slap or a good haircut would solve a lot of his problems. Standby is a very entertaining film, mining a genre that is full of potential and touching upon a lot of little worries that people in their early to mid 30’s may identify with. The character of Alan could have been a real mope, a real downer – but Gleeson doesn’t play him that way (with a sensible haircut too by the way). He injects great humour but also a lot of heart and a few little idiosyncrasies into the character of Alan, all the fears of those approaching (or past) the age of 30 often feel. Alice is very similar, someone looking for the correct path in life, stumbling from one place to the other in hope more so than expectation. Jessica Pare (you might know her from Mad Men) plays Alice with a lithe and confident grace that lights up the screen. Her life, much like Alan’s, does not make sense and nothing seems to be going smoothly, for each of them, until they cross paths. It may be a formulaic romantic comedy set-up but both Gleeson and Pare lift this film above the norms and the clichés with two very likeable characters.

It should be noted that this isn’t a laugh out loud comedy; there are several moments in the film where you will have a good giggle but it won’t have you rolling in the aisles. This is a good thing as the most important part of this film is how Alan and Alice reconnect, how they fall in and out of and then back in love with each other over the course of a night spent in Dublin city. Both Rob and Ronan Burke have balanced this film almost perfectly, keeping a steady pace throughout, matching the humour with romance and the real doubts and uncertainties that relationships go through. It ambles nicely from one moment to the next and this is down almost entirely to the chemistry between the two leads – actually, forget Notting Hill, this is an Irish Before Sunrise. The characters that they meet on their ramble through Dublin, some are hit and some are miss, but all of them are interesting, each of them steering the heart of this film. Yes, the heart, not the head. This is a film for feeling, not thinking.

While Gleeson and Pare work very well as a couple, they are surrounded by a strong supporting cast. Francesca Cherruault plays Beatrice, Gleeson’s dry-witted French nymphomaniac co-worker and while not having a whole lot of screen time, she really makes the most of it. When Alan receives a Valentine’s Day card from his mother Beatrice dryly comments, “you Irish are fucked up” (we’ve all received Valentine’s Day cards from our Ma’s, right?). Alan’s band mates are great craic too; John Lynn (who was born to play Gerry Ryan, if they ever get around to making a movie of his life) and Love/Hate’s Ian Lloyd Anderson provide the film with a few of the comedic highlights (Lynn meeting Alice for the first time is particularly memorable). There are many moments in this film that will make you smile and, unlike a lot of the output from the Hollywood method of making romantic comedies, you actually care about Alan and Alice.

Standby is all about second chances, recognising them and then seeing if you have the courage to take them. It’s also has a brilliantly varied soundtrack; Hank Williams, Depeche Mode, Lonnie Donnegan etc – a few of which are performed by the cast themselves. On the negative side though, there are no bold choices here, it is very much boy meets girl, boy loses girl, boy has to get girl back – but there are a few twists to the conventions along the way. What is special about this film is Brian Gleeson and Jessica Pare and the vitality they bring to their characters. Do you like a film to leave you smiling, smiling as the credits roll and smiling as you walk out of the cinema and down the street? Standby is that type of film.

Know More | An Interview With B Dolan

The Indiana Jones Franchise And The Last Crusade | One Final Installment?

“I’ll be there… around every corner…” | The Shadowat…