Supermovies News: From the Internet Bullpen to You | 1 |

So your five year guide to the Supermovies up to 2020 are done and dusted (links at the bottom). I’ll keep you all up to date from here on out on any rumours, castings, attached directors, trailers and more as the weeks go by. With such a mass of comic book goodies in the pipeline there will be no shortage of things to talk about. So lets get started:

The big news this week is the trailer for Deadpool finally being released (so you don’t have to keep rewatching that shaky, grainy leaked footage from Comic Con).

The ‘Merc with the Mouth’ is one of the most loved characters in the Marvel Universe and his reintroduction to the cinematic world has been highly anticipated. The red band trailer above showcases just what the fans wanted; plenty of blood and even more off-beat humour. Director Tim Miller talked to Empire Magazine about the trailer and is definitely worth the read.

We see Deadpool out of his red and black get-up to expose his scarred figure and get the first look at Miller’s take on Colossus and Negasonic. Ajax, another subject in the Weapon-X program, can be seen trading blows in a knife fight with Wade (Reynolds) and will surely be the main (at least one of the lead) antagonists in the film. Ed Skrein, who will be portraying the new Transporter in a very unneeded reboot, will play this new villain.

The green band trailer was also released and as it needs to tip-toe around the cursing and gore, it delivers a brilliantly cheeky version of above which is worth checking out all on its own.

Fantastic 4 Reboot Receives Poor Reviews but is set to be Box Office Success.

I had high hopes for this reboot. Unfortunately the early reviews in for the super-powered family are pretty bad. Todd McCarthy of The Hollywood Reporter wrote that “Fantastic Four feels like a 100-minute trailer for a movie that never happens” giving it a measly 2/10 and Brian Lowry for Variety saying the reboot was “not an embarrassment, but an experiment that didn’t gel” only dishing out half-marks. Currently with a score of 14% on Rotten Tomatoes, it holds a spot in-between Pixels and Pall Blart: Mall Cop 2 (chin up Kevin James).

Even though all the doom and gloom surrounding these initial reviews may take a few movie-goers from the ticket lines, I think most people will make their way down to the cinema to check out the latest Supermovie. Sure that’s what people do these days; eat, sleep, work, watch Supermovies.

Estimates of the weekend’s box-office are between $50-80 Million for the Fox reboot as Mission Impossible: Rogue Nation has already been released and the only competition seemingly coming from Aardman Animation’s Shaun the Sheep.

This weekend in Dublin’s Convention Centre a little bit of San Diego will be gracing our shores. The Dublin Comic Con may not be the melting pot of A-list celebs like its American counterpart but this year the organisers can be proud of themselves, producing a great line-up.

Alongside the Irish comic book movers and shakers, we have two favourites from the brilliant Buffy the Vampire Slayer, Nicholas Brendon and Emma Caulfield (Xander and Anya), Alexis Cruz from Stargate, Hellboy’s Ladislac Bernan, Star Trek’s Dr. Beverly Crusher, Gates McFadden and the brilliant Michael Rooker of Mallrats, Guardians of the Galaxy and Walking Dead fame. One of the funnest Q&As of all time could possibly be with Billy West. West is the voice of Doug, Ren & Stimpy and Fry, Professor Farnsworth, Dr. Zoidberg and Zapp Branigan from Futurama. Think of the possible conversations he could have with himself.

That is a seriously great lineup for our growing Comic Con. Tickets are nearly all sold out but check their website to be sure.

Now some random stuff from the land of the Internet:

Although this could just be Mark visiting his friend Chris Evans on set, or maybe he was in the neighbourhood, who knows? Who cares? Me and a load of other people. The net is buzzing with rumours that Banner/Hulk will feature in some way during the latest of the Captain America trilogy. Only time will tell on this one. Staying with Civil War…

As we guessed, Spider-Man’s part in the Civil War storyline could never match that of the comics. They could not introduce such a pivotal character and go all gung-ho with it. When Tom Holland was cast as the teenage Spidey, we knew for sure that he would not play the same role the older Parker has in the comics. I’m 100% behind bringing Spider-Man into the MCU, am I delighted they cast yet another teenager? No. But I rarely get everything I want. I do however want to see a new villain for the web-slinger…. 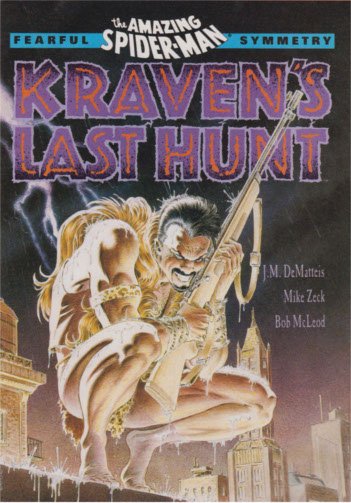 Kraven to be Newest Spider-Man Villain According to High Quality Rumour.

This is what I love about the rumours online to do with Supermovies. They are ridiculous.

Maybe she just wanted to read the bloody thing. Anyway, it’s now a rumour so there you go. Kraven the Hunter is a bit of a silly character, albeit a great one, who works fine in comics and cartoons but would need a huge re-do if brought to the silver screen. Spider-Man has always been his “ultimate prey” but if we are dealing with a teenage Peter Parker, again this does not fit with ‘Kraven’s Last Hunt’ storyline.

New Pictures from X-Men Apocalypse Cause Uproar and Olivia Munn Shows Off her Skills.

There were a host of new images from the set of the latest X-Men venture and one has particularly caused a stir online. Oscar Issac (Ex Machina, A Most Violent Year) dons the armour of the several thousand year old demigod but the colour has rustled a few feathers. Although the image on the front cover of Entertainment Weekly is the usual blue of Apocalypse, the scenes from the set seem to have a purple hue. A very purple hue to be honest. It may just be the set lighting but that’s all it takes for an online fanboy uproar. There are also great photos of Storm, Jubilee, Nightcrawler and of course the regulars from Days of Future Past. 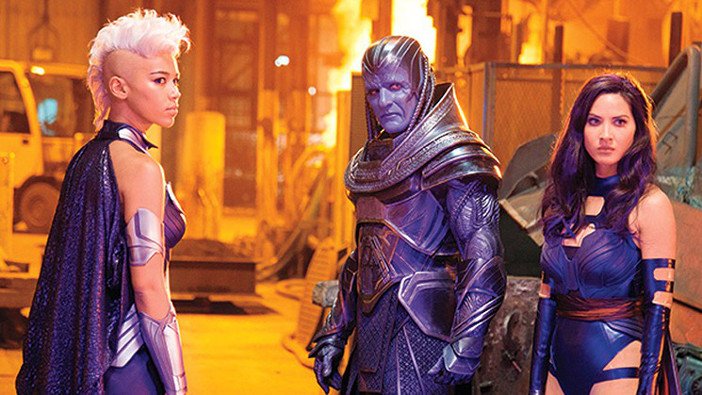 Olivia Munn (on the right, above) has been in the hearts of fanboys for years after co-hosting Attack the Show, appearing at many Comic Cons for years and corresponding for The Daily Show. Munn now makes her way away from the cosplay and into the Supermovies as Psylocke. Munn has been posting videos on her Instagram as she trains for her new role.

Tatum definitely on board for Gambit.

Channing Tatum has closed his deal with after a shaky week of rumours that he was ready to leave the project before it started. I found the news that he may leave the Fox contract to be quite strange considering he had appeared alongside the X-Men cast at Comic Con just a short while ago. Thankfully that rumour has now been quashed and the Ragin’ Cajun feature can get on track.

Doctor Strange to be shot in London.

Doc Strange director Scott Derrickson (The Exorcism of Emily Rose, Sinister) has posted on his twitter account while on the banks of the Thames looking for some mystical settings for Benedict Cumberbatch to do his thang in the 2016 release.

New Shots from Batman Vs. Superman in latest Empire.

The latest issue of Empire magazine has a load of new shots from the set of Dawn of Justice and are worth picking up an issue for that alone. Not that much of a fanboy? Fair enough. It also has an interview with the fantastic Hayley Atwell (Agent Carter) and plenty of news from Comic Con. Here are a few cheeky photocopies from comicbook.com.

And finally…Star-Lord’s Origin In New Guardians Of The Galaxy Animated Series.

Disney XD’s new animation series is set to hit your telly-box in September but here is a sneak preview. Here we have a look at the origin story of Peter Quill aka StarLord (Chris Pratt in James Gunn’s Marvel feature).

And that is all from me this week. Check out the links below for my five year guide to all Supermovies from now to 2020 and I’ll see you next time for more rumours and news from the world of comic book movies.

Part 6: Valiant Comic’s Bloodshot, The Flash and The Avengers and back with Infinity War Part 1.

Review | A Month in the Country