Supermovies News: From the Internet Bullpen to You | 2 |

Welcome back to your roundup of Supermovies news, from the fanboy-infested crooks of the internet straight to you. Last time round I talked about the Deadpool trailer, Dublin ComicCon and lots more. This week we kick things off at Disney’s D23 Expo, a Disney-specific version of the famed San Diego ComicCon.

The Godfather of the MCU (Marvel Cinematic Universe), Kevin Feige, took over one of the halls at the Disney convention and presented an introduction for two big hitters from the Supermovies powerhouse coming in Phase 3. 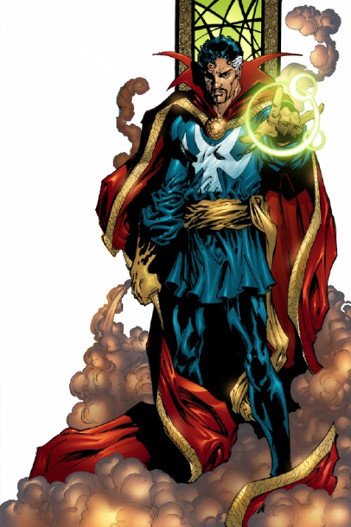 He kicked off proceedings by talking about the gateway into Marvel mysticism, Doctor Strange. He confirmed the actors already signed up, namely the great Benedict Cumberbatch (Sherlock, The Imitation Game) donning the cape of Steven Strange as well as Tilda Swinton (Constantine, We Need to Talk about Kevin) playing The Ancient One and Chiwetel Ejiofor (12 Years a Slave, Children of Men) as the villainous Baron Mordo.

One of the more unexpected developments from the showcase was the Doctor’s costume. Many had believed that Marvel would tone things back a bit, bring the over-the-top caped get-up into the 21st century. But instead it was revealed that Cumberbatch will indeed be donning the cape and the stylings of the Doctor from the comic books. Although they haven’t released anything officially yet, reports from the Expo claim it is nearly exactly like the costume pictured.

Although the man himself couldn’t make it on the night he did send a little message to the fans and it can be seen below. And it leads us nicely into the second movie that Feige introduced; Captain America: Civil War.

While the footage/trailer from Civil War has not been released (yet), if you want a break down of what the lucky crowds saw on the night, the folks over at comicbook.com have given us just that. Obviously, spoilers are contained.

While doing the media rounds, Chris Evans talked to buzzed.com about what he loves about his character, here’s what he had to say:

The best thing about Cap is he’s such a sympathetic character, He struggles so much [a[and]e doesn’t bleed on people. So to have a character who’s always taking his conflict in such a personal manner, when he has the opportunity to reconnect in a way that could be purely self-serving — it’s not for the greater good, it’s not for anyone else, it’s just for him and he’s put himself last so often, so many times — when you have a character that just remembers him and he has a flash of personal agenda, it’s rewarding. I like it. I like those moments where Cap gets to have a little nugget just for himself.

Last time I alluded to the fact that new Spider-Man, Tom Holland, had already wrapped up his Civil War shoot. However he has actually joined the rest of the cast members out in Germany for a few more days shooting. This could mean that we are going to have a little more Spidey than previously expected, but we will just have to wait and see. Rumour has it that we will see Holland don two separate Spider-Man suits during the movie.

Last but not least, there has been a flurry of set photos popping up on Twitter in the last week including Bucky and Falcon, who may be teaming up, and Black Panther in action.

After a Reddit AMA, UFC powerhouse and ocassional actress Ronda Rousey (Furious 7, Entourage) has been stirring interest online over a possible shot at the role of Carol Danvers aka Captain Marvel. Sharing fan-art on your Instagram does not a hero make, however it is getting a lot of attention online and even if it doesn’t come to pass (and probably/hopefully won’t) it may lead to the undefeated champ making a cameo spot in a future Marvel project. Something to keep the fans happy. 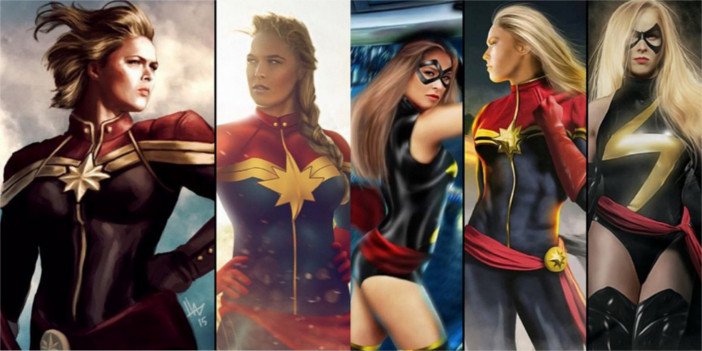 A REAL possibility could be Emily Blunt (Edge of Tomorrow, Looper) and if you take the word of Mark E. Reilly as truth, it’s already a done deal. Reilly is the host of the Meet the Movie Press podcast and he has it on “good authority” that the deal has already been made. It wouldn’t be a huge shock as Blunt has been linked to the roles of both Black Widow and Peggy Carter in the MCU before, telling vulture.com in 2014 that:

It was never the right time, really, and it just didn’t work out scheduling-wise with Black Widow and Peggy Carter. It’s always a difficult thing to talk about, because it’s not fair to the actresses who ended up playing them, you know? It just wasn’t the right time.

So I’m taking from that, that it just wasn’t the right time. Maybe now is. I would be a happy chappie if it was.

Before we get into the nitty-gritty of Internet rumours lets all sit and salivate over the Suicide Squad  shooting script posted by director David Ayer.

I don’t really NEED a folder right now but #ShutUpAndTakeMyMoney.

Now for the outlandish and the crazy, and the weirdly long-shot-come-plausible rumours of the Joker’s origin in Suicide Squad. This may contain SPOILERS (just scroll until you see Wolverine to avoid). It’s just a fan’s rumour that is taking over the fanboy sites but it may ruin something, who knows. If it is true, massive spoiler, if not, it isn’t. Your choice. Let’s begin:

So, right, where to begin? The original photo (that caused outrage online) of the new Joker, played by Jared Leto was released by David Ayer back in April. Everyone went ape-shit over the tattoos and grill sported by the Clown Prince of Crime, but what if that wasn’t the Joker at all…

Wha??? Okay so during the awesome Dawn of Justice trailer from ComicCon we can see Robin’s costume, at least what’s left of it. What if, and here comes the stretch, Robin (aka Jason Todd) was taken captive by the Joker, tortured, tattooed, had his teeth knock out and mentally broken until he became the “Joker” we see in Suicide Squad.

This all stems from the bullet-holes in Todd’s costume and two scars on the Ayer’s photo of Leto’s Joker as seen circled below. 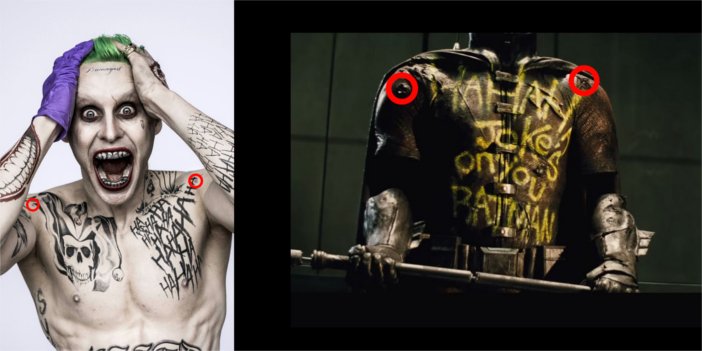 It was brought to the attention of Reddit, then the world by user DeathByRequest and I recommend checking out the thread and see what people think. It’s all very interesting and possibly exciting. If it is true, fair play on spotting that. If it’s not, then it’s great imagination.

On the Australian Daily Telegraph’s podcast earlier this week, Hugh Jackman talked briefly about his latest Wolverine solo outing and suggested that his arch-nemesis Sabertooth may make a come back. He also said that the fans can expect Logan to unleash a “berserker rage” again.

If you’re a fan of the comics, then you should know that the words ‘berserker rage’ came up a lot, if you know Wolverine, you’ll understand.

So we can hopefully expect some animalistic Wolverine in what is likely to be Jackman’s last outing as the clawed mutant. When “berserker rage” gets brought up in the comics, you know that there will not be any prisoners taken, no guts left un-eviscerated, no one left alive. Sounds bloody fantastic.

Blob to feature in Apocalypse?

No one is attached to the part and this is also the first mention of the character since the X-Men shoot started but one Instagram post later and we have ourselves a rumour. Benjamin Malartre Bureau (aka benofk_funko) posted a picture and a comment about spending 4 days on set and started listing the actors and characters, and he included the #blob. The Blob has featured in Wolverines awful Origins movie, but might the long-time enemy of the X-Men appear again in the latest film? If you are unfamiliar with the man so big he has his own gravitational pull, check out this dry yet informative video.

Sad news today as actress Yvonne Craig passed away at the age of 78 due to complications brought about from breast cancer. Craig played Barbara Gordon aka Batgirl in the classic 60s TV Series Batman along side Adam West. She also thought us all about the importance of equality.

Any fans of both Batman and NWA will appreciate this mash up by Matthew Schwartz: Bane, Two Face, The Riddler and the Joker all drop lyrical their discontent for the city of Gotham and the Caped Crusader.

Check out the links below for my five year guide to all Supermovies from now to 2020 and I’ll see you next time for more rumours and news from the world of comic book movies.

Poem of the Week |15| Aftermath