Supermovies News: From the Internet Bullpen to You | 6 | [Featuring Batman V Superman and an Ant-Man Sequel]

Welcome back, ladies and gentlemen, to another fun-filled selection of news and rumours from the world of comic book movies, or Supermovies, if you will. This week we look at all things Batman V Superman, an Ant-Man sequel, a big casting for Wonder Woman and chat about the Joker’s involvement in Suicide Squad.

Bob Kane gets a Star on Walk of Fame, Batman’s World Record and Snyder talks Affleck in Costume

Last week saw the recognition of one of the greats in the world of comic books, Bob Kane. Kane is responsible for the creation of Catwoman, Two-Face, Robin, The Joker and Batman himself alongside his creative partner Bill Finger. Kane had his star on Hollywood’s Walk of Fame placed next to the brilliant Adam West in a ceremony at which Zach Snyder was present.

Snyder talked about the honour of taking on the responsibility of designing a Batman for the big screen and recalled seeing Ben Affleck in costume for the first time:

We put him in front of the camera, and I was just having him turn and look around a little bit, looking Batman-ish…and when I looked at Ben he was the perfect personification of the Batman I had in my mind.

He went on to talk about the Batman in all of us and how the caped crusader is a hero we can all relate to. You can watch the whole ceremony here, Snyder talks at 20 minutes in.

After Snyder said his piece there was a letter read out from Adam West himself and then a representative for Guinness World Records awarded Batman a certificate for being the most adapted comic book character on the big screen (even if some of them are better left unmentioned). Affleck’s Batman will be the 9th appearance of the cape and cowl in a live-action full length film. 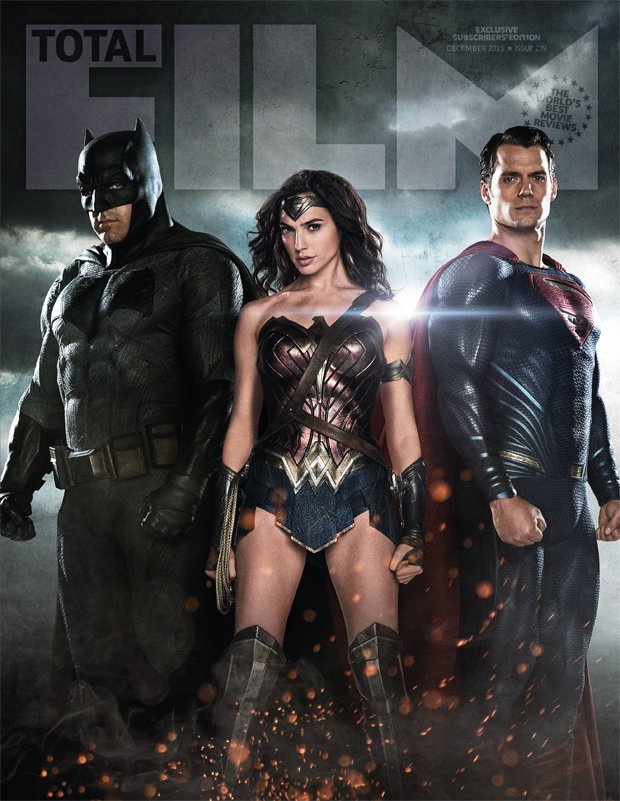 This December’s edition of Total Film promises to be a bumper package for any Batman V Superman fan as the magazine goes behind the scenes at one of the most talked about Supermovies of the past decade. The cover boasts a pretty awesome picture of the three heroes, Cavill’s Superman, Gadot’s Wonder Woman and the gigantic frame of Affleck’s Batman. I’m a big fan of the new Bat-suit and the older, disgruntled Bruce Wayne just looks bad-ass in it. For all I give out about Snyder, I am getting pretty psyched to see this.

The budget for Marvel’s two-parter Avengers: Infinity War is said to be $1 Billion. Yes. ONE BILLION DOLLARS. But $400 Million of that will be going to cast, screenwriters and the directing Russo Brothers, with Robert Downey Jr rumoured to be getting the greatest chunk of it to return as Iron Man.

It shows both the sickening wealth of these studios but also the confidence that they will get bums in seats and still make a killer profit off these projects.

Ant-Man and the Wasp

Earlier this month, Marvel announced the sequel to the successful Ant-Man movie will be scheduled for July 6th 2018. Now, according to The Hollywood reporter, director Payton Reed will return to direct the follow-up, Ant-Man and the Wasp. No writers have yet been attached but it is safe to assume that Edgar Wright and Joe Cornish, who penned the first script, will not be returning due to the fall out between the two and the studio during the filming of the miniature superhero’s first big screen outing. However, Adam McKay and Paul Rudd might return to bring the funnies back on screen for the Ant-Man sequel, as the film’s humour was a definite selling point.

Anthony Mackie, who will don the wings of Falcon yet again in Civil War, was asked about how his relationship with Ant-Man will progress after we saw them kicking lumps out of each other in the summer success. Mackie responded,

Yeah, our relationship is… yeah [laughs]. It grows in Civil War, but that’s Paul Rudd, man. Paul Rudd and I just make fun of each other all the time, so it just carries over into the movie.

Hopefully the two will continue their chemistry in the next instalment of Captain America and we can get a few more awesome fight scenes. Check out their first fisticuffs, from Ant-Man, below:

The A-lister and star of loads of films I don’t like, but a few I do, Nicole Kidman, is in talks to join the DC Cinematic Universe and the cast of Wonder Woman. Directed by Patty Jenkins, who has brought us the brutally brilliant Monster and took the helm of The Killing’s (US Version) pilot episode, already has Gal Gadot and Chris Pine on board but the talk of getting the oscar winning Kidman on cast is lighting up the internet. It is rumoured that Kidman will be a high ranking Amazonian warrior. They obviously have a different impression of what Amazonian warriors looked like compared to Futurama, but once they can kick ass, who cares.

Wolverine more than just a cameo in Apocalypse?

From initial reports it seemed as though the adamantium-filled badass that is Wolverine would only be making a small appearance in the next X-Men adventure, Apocalypse. Reports are now coming in that he has specifically been recalled for additional shooting as the production team go back for routine re-shoots. Could this mean that Wolverine is just re-shooting the few scenes he was in? Or, could it be that that the cogs have been in motion and additional material is needed to set up Jackman’s solo outing as Wolverine? It is very likely that the next instalment will be setting up the solo films for Wolverine, Gambit and possible Deadpool integration. Will we be setting up for Old Man Logan? Only time will tell.

As we saw above, Total Film was all about Batman V Superman this month but Empire went for the grittier DC expansion pack, Suicide Squad. They have released multiple variant covers and they are plenty of high resolution shots from the set. Comicbook.com have the covers and images here.

Suicide Squad: How Involved is The Joker?

Jamie Lovett over at comicbook.com recently wrote an interesting piece on how he thinks the character of Leto’s Joker will influence the movie, or moreover, won’t influence it at all.

When we see the Suicide Squad together, they are blatantly missing the Joker, and for the most part Enchantress. Enchantress, as I wrote a few weeks back, is being tipped as the main villain of the movie. So where does this leave Leto and his maniacal ways? So we can assume that Joker is not part of the Squad, we can also only take from the footage that he will be in the car chase with Batman, the insane asylum with Harley and the doctor’s surgery (that we saw him in during the trailer). Even though they have really pushed Leto’s drastic image change and plastered his face across everything to do with the movie, and taking into account that Leto has gone full-Ledger with his method, we don’t really have any idea whether or not he will be a big scene character. Here’s hoping he plays a pivotal role.

The time is nearly upon us. November 20th sees Jessica Jones hit Netflix and we have finally been given a beautifully dark and creepy trailer. Let’s just pray the series lives up to the hype. Personally I think they have captured the tone of the comics brilliantly in this and I can’t wait to dive straight into the series.

What if Jurassic World and Guardians of the Galaxy were set in the same Universe?

Ryan Reynolds got a team of mutants together to try and cause some trouble last weekend.

[youtube i[youtube id=”Hr1YnpLiJC8" align=”center” autoplay=”no” maxwidth=”702"]eck out the links below for my five year guide to all Supermovies from now to 2020 and I’ll see you next time for more rumours and news from the world of comic book movies.