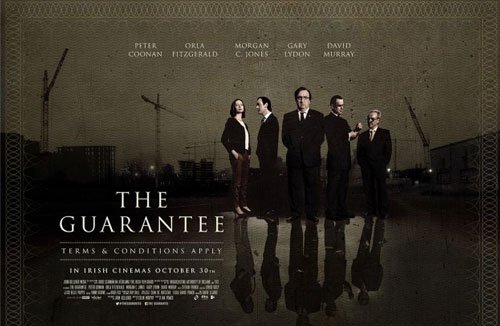 The Guarantee is often an infuriating experience. Based on the play ‘Guaranteed‘ by Colin Murphy, Ian Power’s film tells the story of the banking collapse of 2008. We all know it was a time when the stakes were high but does it make for good drama?

The movie never really settles into itself. It often gets bogged down in too much exposition and lacks a sense of time, place and focus. We’ll see someone on the phone. We cut to news footage of a talking head telling us it’s all grand. We cut back to them on the phone. Is it the same day? The same week? It’s often unclear. The exposition often takes centre stage and some characters don’t have much to do other than stare at text that pops up on screen.

Since it was shot over just 9 days, some of this can be explained as the limits of a small production. Still, do we really need to see Brian Cowen opening a handball court that they couldn’t afford to shoot? Could we go without seeing a press conference shot against a black wall? Given the complex nature of the crisis, the decision to have some actors play double roles is misguided too and adds to the confusion.

It’s a shame really. They’ve assembled a great cast. Peter Coonan stands out as the real life panto villain that is David Drumm. In a film that’s so busy and muddled it’s pretty telling that the quiet moments are the ones that linger afterwards; someone swearing powerlessly at an espresso machine, smoking out a Kildare St window in the middle of the night. It’s the human stuff that you want more of.

Those moments are, however, drowned out by the films many flaws. Unfortunately it seems a good crisis has gone to waste here.

The Hellfire Clubs – decadence, with a whiff of brimstone