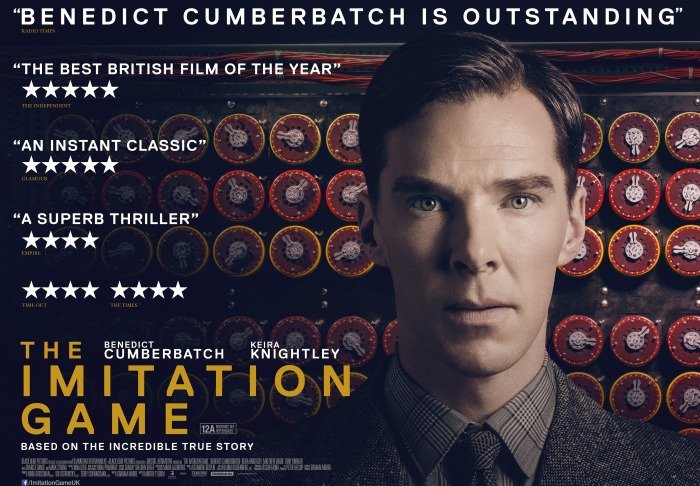 The cinema-goer realises he read Andrew Hodges’ book on Alan Turing, the University of Cambridge and British Military Intelligence mathematician, who may single-handedly have invented modern discourse on Artificial Intelligence, almost twenty years ago. The cinema-goer hopes the film is as good, in its own way, as that fine book.

“Enigma is a machine. A very well-designed machine. Maybe our problem is that we’re trying to beat it with men. What if only a machine can understand another machine.”

The film is determinedly mannish. As the times (1939-1954) were. The women are decorous, smart in alluring ways, sometimes sexually active and most-times clerical. Their costumes are glorious. The woman cryptographer Joan Elizabeth Clarke, played marvellously by Keira Knightly, is peripheral until near the end when she manages to be in the shed, the film’s significant location, with the men and the machine named Christopher. The echo with contemporary Mens’ Sheds groups pleases the cinema-goer.

This is a film full of secrets. Secrets of sexual orientation and practice, within and between genders, secrets within families, secrets of State, between States and between departments within States. Thus it is no surprise to the cinema-goer that the strongest character (the hero?) is the MI6 officer, Stewart Menzies, the secrets-meister, who is always there, played by ace actor Mark Strong.

“False jobs — pay stubs, bank accounts — will be created for you. No one can know what you really do.”

The cream of contemporary London-based screen actors appear in the film. Rory Kinnear hasn’t much to do as the cop who brings Turing down for indecency in 1951 and he does it well. Charles Dance harrumphs around brilliantly in a naval uniform. Mathew Goode is a star turn as handsome cad and brave sport, Hugh Alexander. Benedict Cumberbatch mixes fey with antic to good effect in playing Turing, though it all serves to present Turing as a very bold, precocious boy right up to the end, who would have his way, and stamp his foot if he had to, because he never got over the loss of his first love, his public-school mate Christopher. 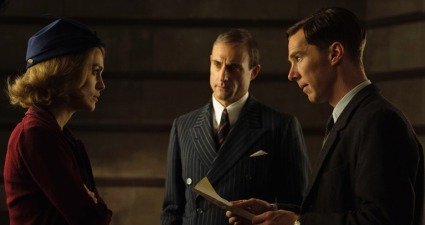 “I am well aware of my obligations, legal and otherwise. And I assure you that what I choose to tell or not to tell you will be entirely up to me.”

And despite all the running about, as the Turing machine triumphs and the Enigma code is broken, the cinema-goer experiences a deflation as the film winds down. The scene where the MI6 officer, Menzies, tells Turing and his team to destroy everything and to go home and never speak about their work again carries no chill, simply the damp acquiescence of intelligent people. It calls out for a Julian Assange of the day, dressed in high-waisted trousers, with a floppy, side-creased hairdo and hang-dog look, to stand by the resulting bonfire, stuffing papers into his pockets and not into the flames.

But this a bio-pic and it must stick to the facts of the life, as the film-makers see them. Thus, there is a lot of writing on the screen at the end, as they run out of images and dialogue. Film is shorthand in the end and writing on screen the most basic from of such shorthand.

“In this case, love just lost the Germans the whole bloody war.”

The cinema-goer wonders if the writing had run on would it have noted that MI6 continues to weave its devastating mysteries into all our lives; that public schools and elitist universities persist; that homosexuals still occupy less favourable positions in the world; that women, despite their best efforts, are often peripheral, even today. And that war-mongering rages on, now and into the future. That is no secret. Where is the victory for which so many lives were wasted?

Turing’s great achievement is the concept and possibility of Artificial Intelligence. The challenge is how to use intelligence; really, artificially and without secrets.

“The game was obviously a very simple one.” 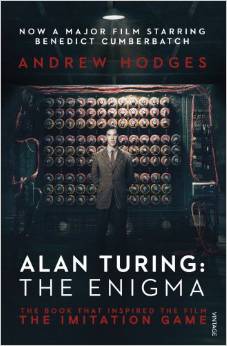 The film is a decent, well-made mid-twentieth century costume drama of middle England’s experience of World War 2, principally as a site of bureaucratic in-fighting. For a fuller treatment of Turing’s life and times, it’s back to Hodges’ book, nicely re-packaged as a film tie-in.

“It is the very people who no one else imagines anything of who do the things that no one else can imagine.”

The cinema-goer smiles to think Andrew Hodges may make a few bob from his good work.

The Imitation Game is in cinemas now.

There is no Walk of Shame, Only Poetry in Motion

Film Review | I, Daniel Blakeis a Modern Parable on the Horrifying Nature of the…