A Memorable Mini Commercial | The Italian Job Reviewed at 15

Released in 2003, The Italian Job is not a straight forward re-make of a much-loved film. The 2003 version uses some key elements from the 1969 original – the title, a once in a lifetime robbery, the Mini – to inspire a story about revenge and payback set in LA. It’s a re-imagining that struggles to live up to the legacy of its predecessor but is an enjoyable heist thriller in its own right. 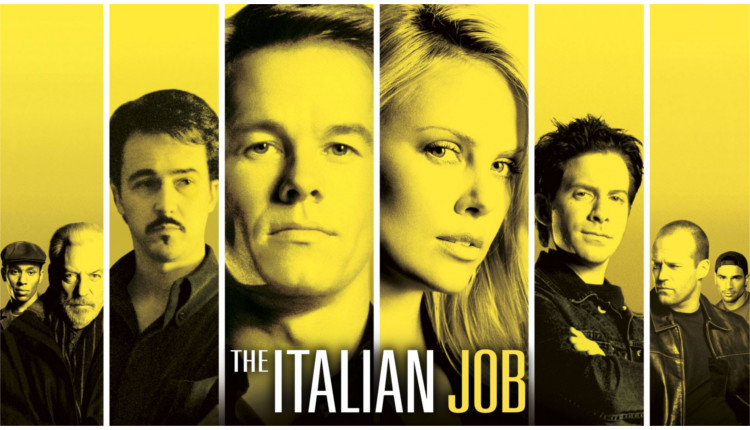 This time, the 35 million dollars in gold bullion is in Venice and the team pull off their planned robbery and escape. The gang is led by safe-cracker John Bridger (a too brief cameo from Donald Sutherland) and Charlie Croker (Mark Wahlberg). However, they are double-crossed by one of their own, Steve (Edward Norton), who wants the loot for himself. In the chaos, Bridger is murdered and the rest of the team – hacker Lyle (Seth Green), driver Handsome Rob (Jason Statham) and explosive expert Left Ear (Mos Def) – almost die of hypothermia while hiding in a freezing lake.

One year later, the gang re-unites to get their revenge on Steve and steal back the gold. They need the help of John Bridger’s daughter Stella (Charlize Theron), also a professional safe-cracker, to make the plan work. The action plays out on the streets of LA as essentially a long product placement for the Mini Cooper.

This car chase sequences are the highlight of the film. The Minis scoot about in lean stunt-work that uses the minimum amount of CGI. The cars are the stars here with choreography and framing that draws inspiration from films like Bullitt, Ronin and The Bourne Identity. The stunts here aren’t as outlandish as those that are the hallmark of the Fast and the Furious franchise (The Italian Job director F Gary Gray directed 2017’s The Fate of the Furious also starring Theron and Statham) but it may also have been a reference for the action here.

Unfortunately, the rest of the film isn’t as impressive. While the heist film was having a moment in the early 2000s with Ocean’s Eleven, The Transporter and The Fast and the Furious, I’d argue that The Italian Job is one of the weaker entries. Firstly, the humour has dated. The Napster joke has really lost its meaning over the last 15 years and I’m not convinced that the credits scene featuring Kelly Brook was ever funny. Secondly, the romance subplot appears to have been tacked on as an afterthought rather than being integrated into the overall story. The flimsiness of the romance isn’t helped by the limited onscreen chemistry between Wahlberg and Theron.

Lastly, the film also suffers from uneven performances from its cast. Theron is the only one who manages to create something interesting from her role as the love interest/damsel in distress/Smurfette. Her performance hints at her later career development into one of Hollywood’s most interesting action stars.

The Italian Job grossed 176 million dollars worldwide on a budget of 60 million dollars. It was a decent return that lead to talk of a sequel set in Brazil which never materialised. Despite its flaws, The Italian Job is an enjoyable and watchable film. Like the best commercials, it is a memorable way to suggest that the Mini could be a practical choice for urban driving.

Eimear Dodd is a freelance writer based in Dublin. She recently completed the MA in Journalism at DIT and tweets @dodd_ec