Guy Ritchie’s latest flurry on the big screen leaves a lot to be desired as he takes the much loved 60s espionage series The Man from U.N.C.L.E. through a now well-known Hollywood process I shall call “the unnecessary reboot”.

We kick things off in 1963 East Berlin as ex-thief, now CIA hot-shot, Napoleon Solo (Cavill) attempts to smuggle Gaby Teller (Vikander), a mechanic and daughter of atomic bomb builder, out from under the Iron Curtain before the Russian KGB Terminator-like Illya Kuryakin (Hammer) can get his grubby paws on her.

Imagine the confusion and distrust when these two men, who nearly killed each other, are teamed up to stop a high rolling Italian-Nazi shipping family getting their hands on a nuclear weapon courtesy of Gaby’s aforementioned father.

This film is not awful, but it is not good either. The set and costume design along with the pace-setting soundtrack are the true winners in a film where the lead characters are unlikable and the editing/direction, at best, sloppy. 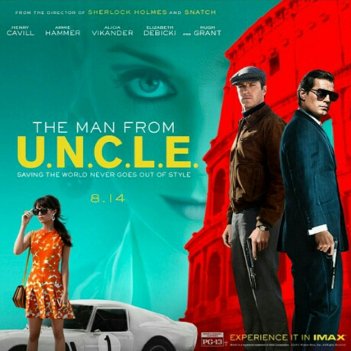 Cavill, the current Superman, delivers another good American accent but it seems his image is more important than his actions on screen. Granted he does look very good indeed throughout. I only recently watched The Lone Ranger in which Hammer gave a far better performance and as a film is overall a more enjoyable watch. In The Man From U.N.C.L.E. his character is a brooding agent with too much inner-turmoil and a loving side aching to get out. It’s all too much. It’s all too unbelievable. Somehow Ritchie managed to breath less life into Vikander’s character than Alex Garland did when she portrayed a robot in the fantastic Ex Machina. I don’t understand why Ritchie wouldn’t utilise the obvious talents of the rising star and instead use Vikander, as he does with all of his lead women, for aesthetic purposes only.

Although the leads share little chemistry on screen there are a few laughs along the way to keep you ticking along until the next spy trope or action scene.

One redeeming feature of the movie is the inclusion of Hugh Grant, who manages to play being perfectly British, well, perfectly. It is not a great sign when a cameo is one of the best parts of the film but Grant gives the movie a fresh feeling towards the end and ties everything up nicely.

Warner Brothers have set themselves up for a possible franchise here but only time will tell if the box-office intake will fund another venture in the world of over-stylised espionage. If they made a sequel, I’d probably watch it but I would probably wait until it became available on Netflix and I felt like watching mindless drivel to nurse a Sunday hangover.

If it’s spy-fun you’re after wait for Mission Impossible: Rogue Nation or Spectre, if it’s mindless fun I’d recommend The Lone Ranger before this.

The Man from U.N.C.L.E. is in cinemas from Friday 14th August. Check out the trailer below.

Secret Article Do Not Open!