The Sequel to Trainspotting – Can it Match the Original?

Choose Life… Choose a sequel?
Like all great cult films, Danny Boyle’s 1996 adaption of Irving Welsh’s Trainspotting has seeped into culture, to a point where it’s now a very common reference point. The “Shite being Scottish” speech is something that you hear regularly at parties, Renton’s famous “Choose life” monologue has been co-opted by advertisements to a point of embarrassment (most recently Welsh himself recited it in an ad for RTE), and a few weeks ago at Electric Picnic the biggest cheer during techno legends Underworld was for the song “Born Slippy”, the crowning track on Trainspotting’s iconic soundtrack. 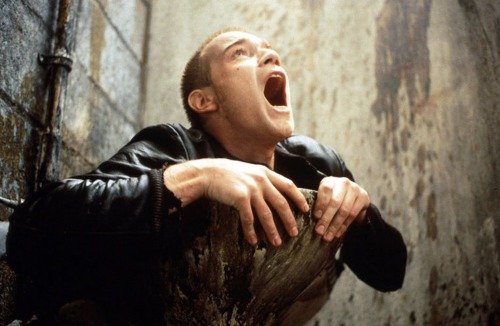 Danny Boyle’s Trainspotting takes a book that is much less a novel and more a collection of vignettes and short sequences featuring a recurring cast, and for the most part turns it into a cohesive narrative. At the same time, the film isn’t plot driven, and instead lends much of its attention to character. Following a group that largely consists of addicts, be it to heroin, alcohol or violence, Trainspotting  examines the life of the underclass in Scotland in the late 1980s, a world that was made up of poverty and drugs, with little prospect of escape. However, both the book and the film frequently take an absurd tone, with a bleak sense of humour present throughout. Whilst not being as political as the novel (“The class war is over” muses book Renton at one point “And we lost”), the film successfully captures the manic energy of the novel, the furious atmosphere, better than most film adaptions. Like all great works of fiction Trainspotting upset and angered many upon its release. The novel was stricken from the shortlist of the Man Booker prize (one of the most revered literary prizes in the world) for, brilliantly, “Offending the sensibilities of the judges”, and the film was denounced by then presidential candidate Bob Dole, for seemingly glorifying heroin abuse. And both works are accessibly difficult as well. The novel is written phonetically, in Scots dialect, meaning it can be quite hard to get into, and the film has a grimy aesthetic that is far from being easy on the eye. However, despite the fact that Trainspotting has entered iconic status, the idea of a sequel seems a bit daunting.

A sequel to Trainspotting that doesn’t adapt Porno, that attempts to keep the plotless narrative of the novel or the first movie seems like a bad idea as well. A quote that’s often thrown around about the novel is that it’s “the voice of punk grown up”. Within that sentence is the essence of the novel. Punk is a movement that grew out of three day working weeks, power cuts and record unemployment. Johnny Rotten of The Sex Pistols has since said that punk only mattered in the first six months, and then it lost all meaning. It stopped becoming something that offered a way out, and became just another product to be sold. In what is perhaps The Sex Pistols most famous song, Rotten chants that there is “no future”. Trainspotting chronicles the middle age of people who had “no future”. This is what lends the film and the book its brutal nihilistic edge, and indeed it is this edge that drives much of the story. It’s important to remember that Renton, the only character who escapes the cycle of drugs and death in Trainspotting, does so by backstabbing his friends and leaving them behind. A sequel to this wouldn’t damage its integrity, but it would struggle to find some of its own. How do you justify a sequel to something that’s supposed to be the definitive portrait of a certain group that has “no future”?

Adam Duke is currently doing a degree in English and History in UCD. He has worked as the music editor for the College Tribune and has also written a bit for Campus.ie. Adam spends his time playing guitar badly, boring people with imdb trivia and trying to work out how he feels about Kanye West.

Adam Worth, the Napoleon of Crime

A Frustrating Tease of Themes | The Children Act Review