A Walk Among The Tombstones | review 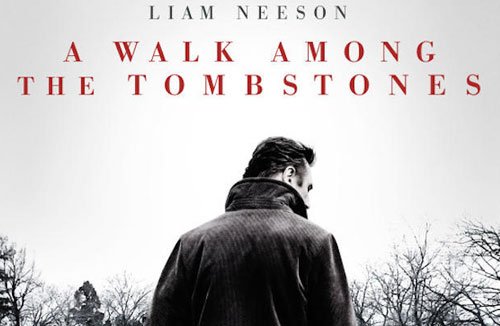 Review by The Netflix Kid as told to Giles Brody

A Walk Among The Tombstones stars Liam Neeson who has thrilled audiences the world over by kicking the shit out of a load of lads in the Taken films. As a studious fan of Neeson’s work in The A-Team, Non-Stop, The Grey and those three films only, I had a certain level of expectation for the amount of murderlizing from the man the people of Ireland have affectionately nicknamed “The Big Fella” and “Lanky Brando”.

The film starts with Neeson playing a drunk NYPD detective who shoots up three lads who rudely interrupt his bourbon breakfast by robbing the pub, killing them all in the process. The screen time : murder ratio starts off strong. Unfortunately this is followed by ages where there’s no murders at all. Then there’s bits where it seems like there’s going to be a murder and then something else happens instead. Instead of murdering some lads, finding an address on a scrap of paper, visiting that address and murdering the lads that live there, the film is full of Neeson chasing up clues. He doesn’t use a blowtorch or the blunt end of a fire extinguisher, instead he uses charm and wit to uncover clues, which is alright but could have used some kickboxing.

There’s a young fella he befriends who Neeson takes under his wing but instead of teaching him how to be the best at killing he teaches him about the basics of being a private eye and a bond is created throughout the film which is nice but it eats into valuable killing time.

So the plot involves some serial killers (finally!) abducting drug dealers’ spouses for ransom and then killing them anyway in ways so gruesome they don’t fully show it to you so you have to use your imagination which turned out to be even worse because that place is like a haunted funfair. An AA acquaintance (or AAAA) asks Neeson to help out his brother whose wife has been taken by the mad lads. A critic at the press screening I was at who kicked my chair whenever I checked my phone said it was lovely to see Neeson back playing an everyman out of his depth and not a killer robot with a Liam Neeson exterior.

Fuckface also bollocked on about how the themes of second chances and redemption are prevalent throughout the film, and Neeson’s character’s innate sense of empathy draws out affecting performances from his co-stars. The film’s script by director and screenwriting legend Scott Frank (Out Of Sight, Get Shorty, Minority Report) is lean with a slow, considered pace – every exchange matters to furthering the plot but Frank does this without skimping on the humanity of the characters. I suppose in the end it’s all right but if it’s murders you’re after at the hand of Liam Neeson you might have to wait until The Expendables 4.

Giles Brody is a comedian and writer/director from Galway based in Dublin. He tweets @GilesBrody