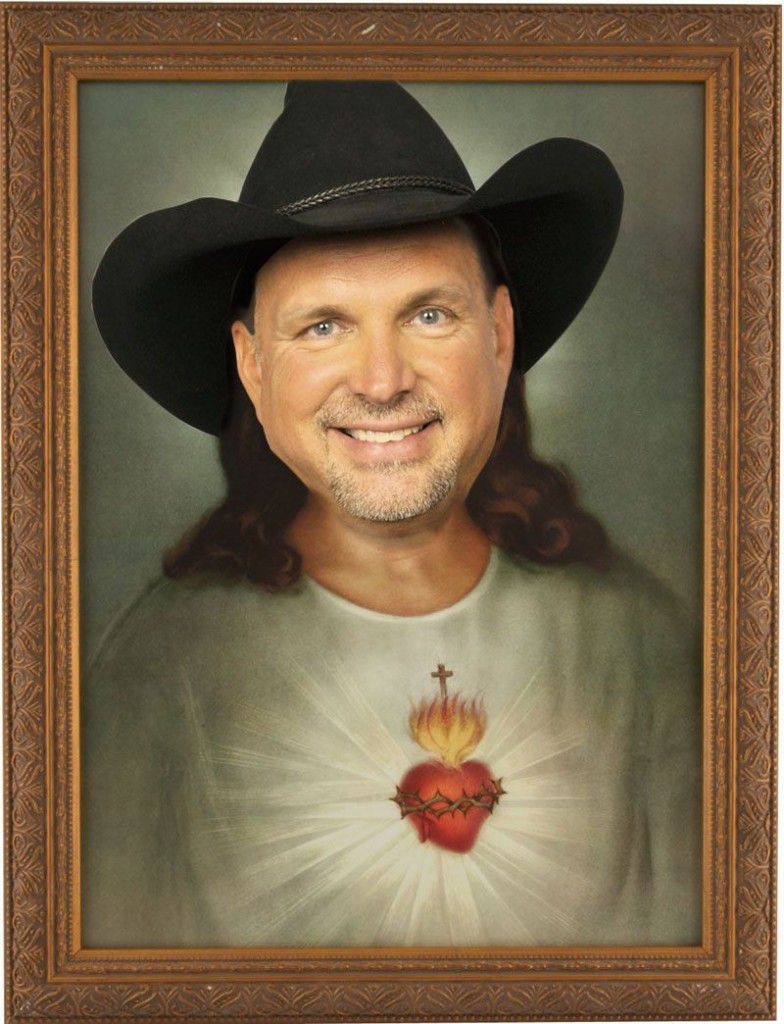 A family is gathered together in their living room, somewhere in Ireland. The rain is beating at the window, as the mother draws the curtains to a close. The father removes the framed Sacred Heart from the wall. The children studiously watch their father’s actions as he carefully removes the printed image of the long-haired Caucasian man with a goatee. He then inserts a new image into the frame. Another white man, more rotund now hangs above the red sanctuary lamp. His name is Garth Brooks.

Of course I’m being facetious, but it is true that like a dormant fever raring its head, Irish audiences (and probably many touts) have gone crazy for the Garth Brooks comeback. On my Facebook newsfeed on the day his initial 2 dates sold out, I was stunned to see Brooks fans coming out of the woodwork sharing their delight or disappointment with the ticket situation. Yes we know he’s massive, and has enjoyed a particular success in Ireland; but this popular?
A friend of mine reflected perfectly my bewilderment when he said: ‘I have gone my whole life not knowing he is the biggest thing in Ireland ever and it makes me feel uncomfortable’.

Whatever your standing on country music, there’s no denying its massive clout in Ireland; Brooks’ pyrotechnic Americana pleases a certain demographic which grew up on Westerns, listening to Patsy Cline and Merle Haggard, and maybe heard these songs being belted out in the local halls. And naturally, that has been passed down to fans that weren’t even born when he last played Dublin in 1997. Fair play to Brooks, and to his enduring appeal. It’s not for me. I wouldn’t dare think any less of a Garth Brooks fan, I’m a Springsteen admirer after all and there are fine, yet very defined lines between their respective brands of blue collar output. I may imagine them in a Stetson when talking to them however, or check for spurs.

Fast forward a few days and Ticketmaster have laid on an extra three dates. Five nights in Croke Park, now sold out. This means almost 10% of the population (of the Republic) has a ticket. 400,000 people.

Imagine the sea of cardboard multi-coloured Stetsons.
Maybe I shouldn’t be so taken-aback by this mania. If Springsteen didn’t bother his arse coming here for nearly twenty years that would surely incite pandemonium if he announced a gig on our shores, but then again Bruce would never do that to us in the first place.

Entertainment, light or heavy, high or low-brow, is crucial and certainly a pre-requisite in any society. But the necessity for it feels somewhat heightened when there is economic difficulty, mass emigration and a general tough time at hand; this is when, more than ever, the individual needs that escape; or so popular belief goes. And indeed the collective also needs this, and what better than a grand communal event such as an outdoor concert. The Irish audience has long been regarded as one of, if not the best in the world. Faithful, receptive and up for fun; unlike, perhaps, some of our more reserved European counterparts. Croker and various fields in our country have not been strangers to large-scale concerts and festivals over the years; we’re a small nation but a big destination for international acts.

Hey, we just love going out and having the craic. Nothing wrong with it. But why does the prospect of Garth Brooks in Dublin this Summer seem different?

Maybe it’s because with a small population like ours, we’re the perfect territory for gigs like this to become unfeasibly popular; everybody knows somebody, who in turns knows somebody else, it snowballs and we all end up going. Sure we love a day out. Rather flippantly on Facebook I posted something along the lines of ‘Garth Brooks? Big Tom & The Mainliners are still playing live near you, Buy local!’

I was having a pop of course, but there is something frustrating about seeing many of our fine local venues struggling to keep afloat; and difficult to see homegrown and smaller visiting artists struggling to sell tickets. Times are tough for the artist, venue and punter. Why? Because people just don’t have that extra cash to play around with?

Four Hundred Thousand people and their discretionary expenditure may suggest that everybody could listen to and invest a little more effort into the amazing music under their nose domestically.

Of course we thrive on international acts visiting. Always. Bring on the big gigs. There’s just something so sudden and unprecedented with this Brooks situation. 400,000 people.

Maybe the crowd could take a detour daily and cause a fuss outside the Dail, or form a line-dance up O’Connell Street, whatever you like.

When the rain stops, the family reach for their coats and scarves. It’s Friday and they’re on their way to see Big Tom in the Town Hall. Buy local.

Life Modeling and the Celebration of Nudity