Comedian and writer Harris Wittels died last week. He had just done some stand-up to an appreciative crowd and had spoken about his new life of sobriety. He was performing with and to a room full of friends. Sadly that same night he had a relapse. His body was discovered the next morning. He was 30. He had just signed a lease on a New York apartment where he was moving to work on a show with Aziz Ansari.

“The goal isn’t becoming famous, it’s doing the type of work you want to see with people of a similar disposition.”

I first became aware of Harris from his many appearances on Scott Aukerman’s Comedy Bang Bang podcast. Harris would come on the show and read out jokes from his phone that he felt weren’t good enough to tweet. The segment became known as Harris’ Foam Corner and had it’s own theme from comedy music maestro Reggie Watts. Harris read out scrappy gags and half-baked ideas to the audible derision of Scott and the other guests. There was usually a gem or two in there (“I’m not getting married until gay people can get married…. because I’m gay”) but more often than not the “jokes” were mundane observations with a filthy twist or some of the worst puns ever uttered. He knew they’d invariably bomb but he read them out anyway because he seemed to be unbiased about his jokes. He treated them all the same and they all deserved a laugh, by any means necessary.

Having been raised Irish Catholic I naturally live in a constant state of shame awareness. Every moment where I don’t actively embarrass myself and have it get back to my parents is one I thank the God I don’t want my aunts to find out I don’t believe in. Harris grew up Jewish, an organisation which also has a fairly good handle on the concept of shame, but his desire to get a laugh regardless of the situation seemed to always be his biggest overriding concern.

From Heuston he went from Boston’s Emerson College (whose alumni includes Louis CK and Steven Wright) to L.A. where he was spotted doing an open mic by Sarah Silverman who took him under her wing. He wrote for her show, for Parks and Rec, Eastbound and Down. He even wrote a joke for the president. When Zach Gallifinakis asked Obama, during his interview on Between Two Ferns, if he’s sorry that he can’t run for a third term, the president responded, “I think it’s a good idea. If I ran a third time it would be sort of like doing a third Hangover movie. It didn’t really work out very well, did it?”

I got a glimpse into the world of American comedy and saw the similarities with my own limited experiences. The stakes were at once both higher and lower in Ireland. There’s only one station that makes comedy programmes so Irish comedians have more time to figure out their voice but less opportunity to have it heard. If you want to be a sitcom writer in Ireland there’s no internships or writer’s assistants jobs. You have to make it yourself. If you want to be a sitcom writer you have to convince people to help you make it. The end game is always Youtube with a brief flicker of hope that it might be the start of something. Then nothing. Then onto the next thing.

Comparatively in L.A., there’s such an abundance of opportunities that the standard is incredibly high and relies a lot on personality and being nice is every bit as important as being funny. But they were also frustrated by not getting to do the comedy they wanted to do. The goal isn’t becoming famous, it’s doing the type of work you want to see with people of a similar disposition.

These podcasts motivated me and my friends to try harder, to write more, to be funnier. Don’t like what 95% of the comics are doing? Don’t waste time complaining about them – just do something different. Do ANYTHING different. Just so long as you don’t do something you don’t think is funny because you think others might – that way madness lies.

I tried listening to Harris’s favourite band Phish after his passing. He had a podcast called Analyse Phish. The thesis of the podcast was to win Scott Aukerman over to the idea of becoming a Phish fan, something Harris singularly failed to do but it didn’t matter. The debate was the goal, not the result. The virtue to accepting somebody because of what they’re like as opposed to what they like is something I wished I’d deciphered when I was back in college attempting to woo a fan of Phish.

I remember sitting on the stoop of our horrible house sharing an earbud and a cigarette. She was a few years older than me, doing her semester abroad from the American Midwest. I was nineteen and, like most people that age, an idiot. I thought it a wise move to romantically pursue someone I had undergone the strictly platonic co-signing of a lease with. Here I was a month later shaking my head in admiration at the end of a particularly exhausting guitar solo as if scoffing at the implausibility of such a perfect piece of music existing. Meanwhile, in my gut, I suppressing the notion that maybe these lads weren’t for me.

She asked what I thought of them. In a flash I envisioned a life where I’d pretend to like Phish, where she and I would marry at a Phish concert annunciated by Phish’s lighting guy and unofficial fifth member. She and I would travel the world (well, North America and Canada) following our band. We could be happy. If I could force myself enough, maybe Phish could supersede my favourite band at the time – The Killers – and she and I could build a life around this inconvenient truth. But alas I could only keep the charade up for so long. I said I liked Phish and was immediately given their back catalogue and 24 hours to get up to speed. The next time she brought up Phish she asked my thoughts on one song in particular. I pretended to know what she was talking about but she seemed unconvinced. Pushed into a corner I said that all of Phish’s songs sounded alike. I remember the sad look that befell her face. Where once stood an ally there now only stood a teenaged liar. I wish I’d taken the time to debate the relative merits of Phish’s pro and con side with her. I wish I’d been mature enough to have a debate. Instead I lied and when called on that lie went on the defensive. I probably defiantly played Hot Fuss at full blast to demonstrate how over her I’d suddenly become.

“Don’t like what 95% of the comics are doing? Don’t waste time complaining about them – just do something different. Do ANYTHING different.”

Music was to briefly bring myself and Harris in contact back in 2011. Harris was in a band with two comedians – Paul Rust and Michael Cassady – called Don’t Stop Or We’ll Die. They played funny songs and occasionally featured on Comedy Bang Bang. She’s Got Titties In All The Right Places and I’ve Got A Brand New Perm For My Camping Trip are titles in their oeuvre. Their stand out track, though, is a non-comic song about a kept woman longing for adventure in New York, Take Me Out Once In A While. Cassady’s piano playing, Paul Rust’s striking voice and Wittels’ smashing of the symbols towards the end, the song is chaotic and glorious. I listened to it on their MySpace page until it was put up on YouTube. Wanting a portable fix I put the YouTube track onto an mp3 that sounded compressed and scratchy but it didn’t matter. I needed to hear it.

When my friend Rory Walsh and I began work on our RTE Storyland web series Student Teacher – my first professional job as a writer/director – I wrote a message to Harris via Facebook. I was officially asking him for permission to use Take Me Out… for our promo. I was unofficially asking for a general comedy blessing. Whether he was aware of it or not, his simple act of letting me use his song for my promo both made my day and terrified me into action. I remember thinking that there was an ultra slim micro chance that Harris Wittels might see the fucking thing so I’d better try to make it good. 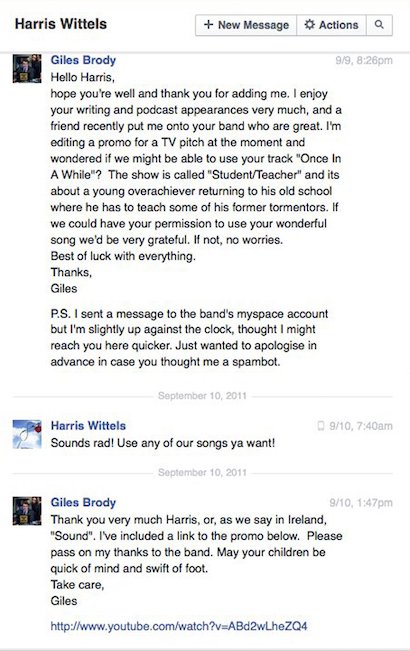 Giles Brody is a comedian and writer/director from Galway based in Dublin. He tweets @GilesBrody