If someone in the near future asks me ‘What was your main memory of Covid-19?’ I’ll know exactly what to say. ‘An ingrown toenail.’

Ok, not exactly a near-death experience in this truly unprecedented time, but developing an ingrown toenail, after stubbing your big toe in a well-concealed pothole, can be pretty painful all the same.

Happened yesterday afternoon. After finally choosing the ‘in favour of face masks’ side of the argument, I decided to try one out. My ultimate decision was not based on intricate medical debate or opinion, more on the fact that my Dick Turpin Highway Robber woollen-scarf-wrapped-round-the-chin look was alarming other shoppers and spooking the security guard in my local Eurospar.

As yesterday afternoon was also sunny, I decided to wear my sunglasses. Big mistake. Face mask, plus sunglasses, plus walking, while trying to maintain social distancing, equals condensation-induced fogged up lens, poor visibility and susceptibility to potholes when stepping off the footpath to avoid manic, panting wheezing joggers.

Damned stats-driven focussed joggers! It’s all about them, isn’t it?

Until then, I’d been doing quite well during the current crises. Granted, I had encountered the odd prolonged bout of existential tedium prompting me to wonder if Scarlett O’Hara had lived during lockdown would she have said ‘Tomorrow is….the same day?’

But overall, I felt very much at ease in this new lo-fi ‘listening to the life-affirming rhapsody of the birdsong’ world. This vast global retirement village of DIY assisted living. With all the spare time on my hands I was even considering watching The Abbey Theatre’s ‘Dear Ireland’ a few weeks back but then asked myself, do I really want to spend ten hours watching fifty actors bang on about how expensive the country is?

The fact of the matter is, for me, the ‘new normal’ is a lot like ‘the old normal’ because throughout my life most days were always like a Bank Holiday Monday with nothing lined up. And as regards socialising, unlike the nation, I’d happily located my inner Boo Radley decades ago.

While placing my poor mangled toenail (still partially attached to my toe) in a small plastic tub of lukewarm lightly salted water this morning, I started pondering the future. The next six months. And how things will change. Suddenly, I was assaulted by an extremely rare sense of clarity and purpose. Never let a good pandemic go to waste, I thought. Then, an ingenious idea struck. Why not re-launch my long moribund stand-up comedy career in the autumn of 2020?

For a former comedian, with my particularly unique and challenging skill set, the conditions over the next while could provide a golden opportunity.

You see when venues do finally re-open, post-Covid, at the latter part of the summer, I’ll be amply prepared. Because throughout my stand-up years in the mid-1990s, most of the time, I only ever played to single digit-numbered, socially distanced audiences.

Tumbleweed was my constant companion in those days, wherever I performed. Confused customers, looking lost, would pop their head in the door of many an upstairs bar room, politely interrupt my act and inquire where the toilet was. Bar fridges whirring was the relentless soundtrack of that time, interspersed by the equine-like grunts of solitary snorers. 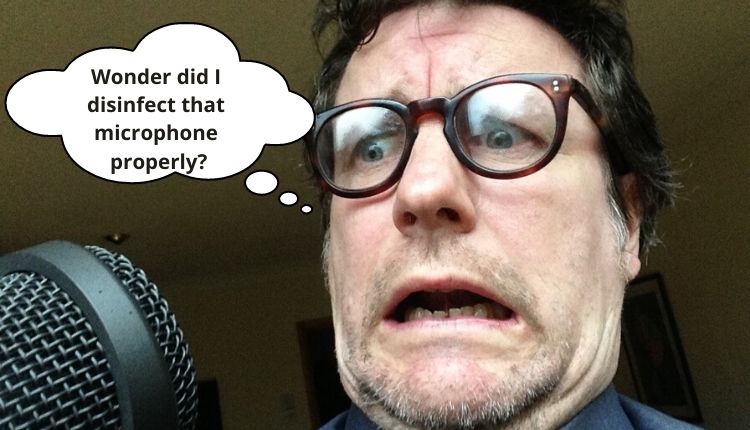 Now to be honest, the getting-up-on-stage-in-front-of-a-miniscule-audience was soul destroying. But character building. Or so my mother kept saying. I still have nightmares about that character building, mother. But now I know all those comedy nights from hell will stand me in good stead. There was that gig in a bar in Drumshamboo in July 1995 where the bemused attendees totalled two Finnish tourists, one local and his three-legged Jack Shepherd. If memory serves me correct, I got the best response of the evening from the mobility-challenged canine who barked enthusiastically when, halfway through my two-hour set I segued into my ‘mad poet who writes doggerel, Ezra Hound’ persona.

Or the terrified older couple who witnessed me self-heckle (just to liven up proceedings) and subsequently start to pummel myself in an unrestrained fist fight, at the St. John’s Theatre, Listowel in 1998. An ambulance had to be called.

Then there was that barman’s wife, in a small pub in Drogheda, who felt so confounded, she must have dropped half-a-dozen pint glasses, during my nine-minute measured meticulous enactment of a not very Cork sounding Roy Keane as Hannibal Lecter.

The way I see it, when pubs and venues start gradually re-opening, things won’t be the same in the live comedy setting, and given my wide-ranging vast experience in learning not how to ‘work a room’ (sometimes it wasn’t even a room, I once played in a redesigned drumlin – eat your heart out Dermot Bannon! – in the inaugural and, as of now, only, Inishbiggle Comedy Festival ‘The Giggle At Biggle’ in 1996), I’ll have a head start on some of these bigger comedy stars who are used to playing the O2 and who may have difficulty adjusting to performing in the more sparsely filled laugh-free spaces of the future.

The new Covid Comedy Club landscape will, though, throw up a few novel (virus?) problems. After the MC introduces each act, will the comedian coming onstage have to firstly disinfect the microphone? And subsequent to that, when the MC returns to the stage, will they too have to disinfect it once more? Maybe microphones will become a thing of the past.

Also, hopefully heckling! On public health grounds. I read a 2014 study recently online, that proved conclusively that droplets can travel up to ten metres in the air when emanating from a drunken heckler. Which leads me on to the vexed topic of actual laughter. That same study claimed that when audience members laugh hysterically droplets can travel even further and create a tsunami of potential pathogens. So, in a post-Covid world will we see venues with names like ‘The Suppressed Titter Comedy Club’ springing up all over the place whose sole purpose will be to limit the amount of laughter generated? Rationing laughs, however, was never a problem for me in the old days so, as stated before, I think I’ll be ideally suited to fit right in, in the ‘new comedy normal’.

Firstly though, I need to write some new material. Yes. That is very important. Fail to prepare new material. Prepare to fail. Again. Better. Or something like that. As Samuel Beckett might have said.

I’ve always had trouble writing new material. Just before I stopped performing over twenty years ago I did go through a particularly difficult period of writers’ block and there were rumours on the circuit that I used to steal other comedians jokes. Not true. Technically. I wouldn’t call it stealing. I saw myself, in that time, more as a covers comedian. I was covering other comedian’s material. Like a covers band. In fact, in a way I was paying tribute to their material by covering it. Some of the stuff I borrowed, actually, was pretty weak. There was that early Dara Ó’ Briain line that never worked. ‘Good night. My name is Dara Ó Briain. You’ve been a great audience.’ No matter how many ways I tried it, it always got a very flat, puzzled response.

Still, I will have a few months to work on stuff before venues start re-opening. And if I can’t write any new material, I can uh….always recycle some old material. Let me see, how did that meticulous enactment with Roy Keane go again?

“I ate his liver with some Bachelors Beans and a nice pint of Murphy….”

Once referred to as ‘The Gummo Marx of Irish comedy’, Karl MacDermott was born in Galway. Find out all you need to know about him at karlmacdermott.com.
His new comic novel ‘58% Cabbage’ is out now.
A recent recipient of the prestigious Falkland L. Cary Obscurity and Underachievement in Literature Award he is currently writer-in-residence at his home in Dublin.

Between You And Me #12 | How to Really Succeed at Life

From Wumpa Fruit to Lava Soup: The Gamer Diet and It’s Effects

The Sad Tale Of A Comedy Junkie

The Life And Death Of An Obscure Irish Actor