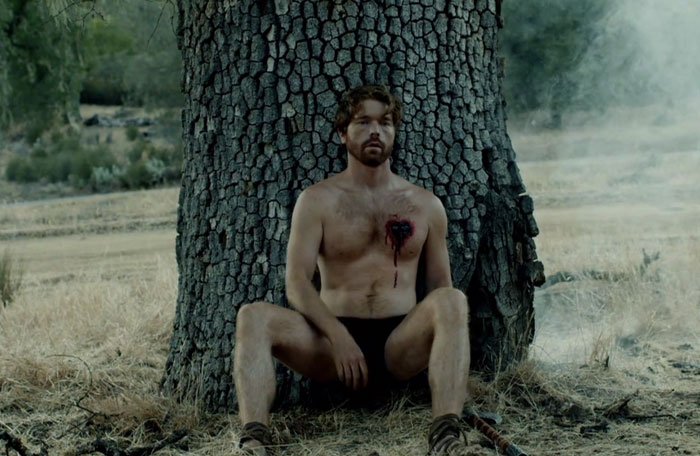 A few weeks ago a short film was released and the internet basically went nuts over it. The film is Renegade and has been featured on numerous comedy and short film websites since then.

The film is the brainchild of actor, writer and film maker Michael Cavanaugh who had a chat with Headstuff about the underpants wearing hero Renegade!

This is Renegade. The interview follows.

I started off by telling him I thought the film was fantastic and asked him a little about his own background:

MC: Thanks, I am glad you liked it!  I have been making short films since I was very young, redoing scenes from my favourite movies as a kid, doing stop motion, making up my own genre movies. I went to school at Columbia College Chicago to study Cinematography, I moved to LA in 2007 and started working as an editor and studying acting. Now I try to split my time between acting and directing, while doing all the other jobs of film making on the side. I really enjoy every part of making movies, even raising money to a certain degree.

How did you come up with the idea for the character of Renegade?

MC: I was in this photo shoot that had me riding a motorcycle in my underwear and after it was done I got really embarrassed at how corny it was. I didn’t want anyone to see the photos. But then I started to think about how funny it was and I met with my friend Kevin Van Witt (the director of Renegade) and we started joking about how this guy ended up in his underwear on a motorcycle. We started coming up with this story about a guy having his clothes and his wife stolen in the middle of the night and being left with only his underwear, the keys to his motorcycle and his quest for revenge. We kept coming up with images and characters and connecting everything we wanted to see him do, like fight three guys at once, throw a spear at Zeus, have an epic kiss with his love. Just fun iconic imagery. The story evolved from there.

The character “Renegade” is a pretty simple guy, I like people who are relentless in a pursuit of something with little distraction or regard for any other part of their life while they go after a goal. He doesn’t need clothes or a job to be in love so he gets rid of those things. Renegade is also a collection of other movie heroes like Harrison ford, Paul Newman, and He-man.

Ye very clearly had a tone that ye wanted to hit and ye seem to have nailed it… what is this tone and what inspired it?

MC: Really we just wanted to make something fun, and we were looking at all of these old 1940s pulp comics and their covers always have these images of mad scientist and druids and girls in distress and hero guys in bathing suits so we started there and then 80s cartoons and B action movies influence a lot of it. I love these references and I don’t really like parody so much but I like making fun of something you love so we just tried to straddle that line of parody and homage.

Where was the film shot and what kind of budget did you work with? And did the budget affect the shooting style or did it facilitate it?

MC: We shot at Lake Nacimiento in Northern California, on a budget of $10,000. I always consider budget while coming up with ideas, it’s good to know what you are capable of with the resources you have. With low budget movies the seams are usually showing some place and if you aren’t aware of that fact your movie will be something you didn’t intend, or you will be in that conversation of “oh we didn’t have enough money”. But you can make something good with any amount, you just need to know exactly what to do and why. But we budget everything exactly from gas to water for the crew, every penny was thought of and spent with no fat.

Is it a short film? Is it a trailer for a long film? Is it a profile piece? Or did ye just want to mash up a load of simple situations together for laughs?

MC: It is a short film, originally it was 10 minutes but it wasn’t as funny and I thought it dragged. So I just kept making it tighter. It has a trailer feel but that’s just a way to tell a large story in a short amount of time. We use some well-worn story tropes that everyone knows so we can skip basic exposition and just make it to the joke and move along.

Ye have hit over 100,000 hits in only a few weeks. Does that count as success in your eyes or what was your aim when the film was finished?

MC: I usually just make things and that’s it, but because so many other people worked on this I felt like it needed to be released and seen so I started promoting it, which has been a whole new thing for me. The 100,000 hits is great I am very happy so many people from around the world have seen it and liked it, it’s very encouraging and feels like success but I still haven’t seen it with an audience and I haven’t made any money from it so there’s room for more success. But really I think I will feel it’s a success if it leads to more work and projects and new relationships with more creative folks.

What’s next for Renegade?

MC: We just started submitting to festivals and we are getting into a lot so that’s fun.

What’s next for you?

MC: I am working on a feature about a group of friends who start a beer-making business in the middle of America. They have a very comprehensive marketing strategy that makes every major beer distributer very angry.