I awoke to the sad news that yesterday, Monday 11th August 2014, a true legend in the world of comedy and film had passed away.

The details behind his untimely death will come thick and fast over the coming days and flood the newsreels and social media sites. I do not wish, at this moment, to speak of the manner of his death. Instead I will bring you through the great movies to which I have found joy over the last three decades.

The first Williams film I saw was probably the ’92 Disney classic Aladdin. William’s comedy styling (which I was completely unaware of at the time) lent to the creation of an exaggerated and hilarious addition to the Disney character list, Genie.

Although I didn’t get most of the impersonations (Arnold Schwarzenegger, Rodney Dangerfield, Jack Nicholson etc.), the character was the heart and soul of the movie. He was the star of the show and made it a constant favorite in the house for years.

Over the coming years, I would come to love Williams for more than just his voice-acting. Hook (1991), Mrs. Doubtfire (1993) and Jumanji (1995) cemented Williams as one of my favorite actors growing up. His films brought a level of action that every kid wanted and a superb comedic presence that could be enjoyed years later. Just like the impersonations from Aladdin, there was so much in these films that flew right over my head until I would re-watch them (over and over again).

Even though his performance in Mrs. Doubtfire was superb, it wouldn’t be until I was a little older that I could really appreciate it and his more serious performances.

Good Will Hunting (1997), for which he won an Academy Award for best supporting actor, is without doubt one of his finest pieces of work. His portrayal of therapist Dr. Sean Maguire, who must try help a defiant genius (Matt Damon) find a purpose in his life, is marvelous and touching. The scene in the park sticks out in my head as one of those iconic turning points in a movie. Both Sean and Will (Damon) grow throughout the movie, with Sean still dealing with his wife’s death. They grow together and bond over similar past struggles. Along with Damon and Ben Affleck winning an Academy Award for Best Original Screenplay, the film was nominated for 7 other awards on the night.

I was impressed with his 2002 movies next, Insomnia and One Hour Photo. These were something different again. Dark, brooding tones, sinister plots and yet again fantastic acting. He was renowned in his stand-up for being a man of many faces and voices; I hadn’t seen these faces before.

Alongside Al Pacino, in Insomnia, we saw Williams as a crime novelist/killer on the run. Hold on. Mrs. Doubtfire as a killer? This was a little unsettling. The Christopher Nolan film was a critical and commercial success and is truly one to watch if you missed it.

Also in that year Williams plays an even creepier role in the Mark Romanek film One Hour Photo. Williams brilliantly portrays an emotionally disturbed loner, working in a photo developing shop, who becomes infatuated with a housewife customer. Another critical success; Williams was showing the world he had the chops to handle just about any role out there.

From here, I wanted more Williams, vintage Williams. This led me to Good Morning, Vietnam (1987) and Dead Poet’s Society (1989).

Earning his first Academy Award nomination for best actor (losing out to Michael Douglas’ Gordon Gecko in Wall Street), Williams plays a radio DJ for the armed forces in Good Morning, Vietnam. As most of the monologue radio pieces are improvised, it is a great introduction to the comedy of Williams. One-liners and impersonations play brilliantly as a barrier between the soldiers (and you the viewer) and the war at hand. His manic diatribes ruffle the feathers of the big wigs but it is the comedian’s job (as ever) to keep the spirits high when things look the worst.

[youtu[youtube id=”wuk8AOjGURE” align=”center” autoplay=”no” maxwidth=”550"]p>Williams second nod for best actor by the Academy (this time losing to Daniel Day-Lewis for his portrayal of Christy Brown in My Left Foot) came for his role as John Keating in the 1989 classic Dead Poet’s Society. A hard-hitting tale of an unorthodox English teacher in a conservative boy’s academy, this film will stay with you for years after watching it. From the tearing out of the introduction of their poetry textbooks (which gave a mathematical formula to rate pieces of poetry) to getting his students to stand on their desks to gain a different perspective on the world, Keating’s teachings brought a fresh look into the realms of education for the boys. He teaches them to think for themselves, seize the day, defy conformity, listen to themselves and trust their instincts in both words and ideas. A truly inspiring film and Williams will forever be “O Captain! My Captain!”

[youtube[youtube id=”-VUV2Yl8gsI” align=”center” autoplay=”no” maxwidth=”550"]I could go on about several of his films. We all have our own favorites, depending on your age. I’ve seen Flubber (1997) countless times, as it was my younger brother’s favorite for years. Patch Adams (1998, also starring Philip Seymour Hoffman) holds dear to many. The Birdcage (1996) is as fabulous as the characters. I’m even a proud owner of Mork and Mindy Season 1 (1978). 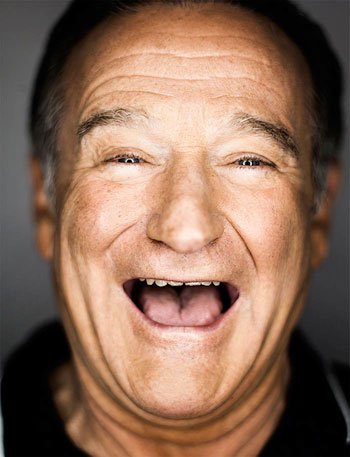 The last film I saw staring Williams was the 2009, low grossing, World’s Greatest Dad. Do me a favor and watch this. Do not look at the trailer or read anything about it. The film serves itself better going in blind. Williams’ performance is great and the soundtrack will be a new favorite.

Steve Martin put it beautifully “I could not be more stunned by the loss of Robin Williams, mensch, great talent, acting partner, genuine soul.”

You will be sorely missed O Captain! My Captain!