The Best of a Good Bunch – Vodafone Comedy Festival

I meant to write this earlier but then stuff got in the way. Here’s a breakdown of my week since the Vodafone Comedy Festival ended.

Monday – I pretended it wasn’t over.

Tuesday – I was sad.

Wednesday – I watched videos of all the comedians on the bill on YouTube.

Thursday – I thought about writing it.

Friday – Today is Friday, I’m writing it. (And now it’s only 51 weeks until the next Vodafone Comedy Festival.)

So, how was it? It was excellent. Iveagh Gardens is an excellent location for everything. It is super duper easily accessible and central. It has grass and paths and downy bits and uppy bits and nice trees and it’s just an altogether lovely place. Then you throw in some well laid out tents, a few food and drink vendors, a sprinkling of toilets here and there, add a few handfuls of human laughers and you’ve got yourself a good time. 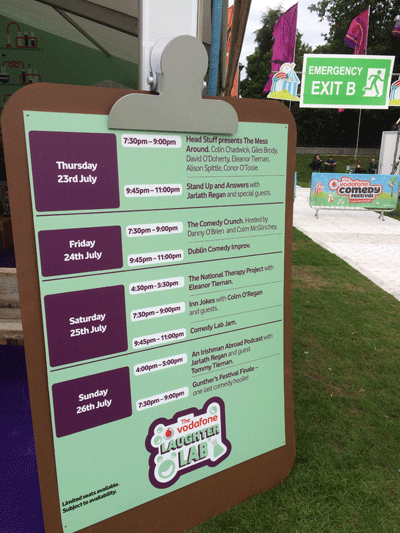 So all that worked really well, but what worked better was the line-up. Aiken promotions, I believe, did the booking, and they did a great job. There was a lovely smattering of Irish comedians on the bill, from the biggest there is, in Tommy Tiernan, to loads of fresh faces (well-represented at The Mess Around which was presented by none other than your own HeadStuff), to the future megastars, like Al Porter who could end up being even bigger than Tommy T himself, according to Karl Spain on The HeadStuff Podcast. I saw David O’Doherty tear it up twice, and Maeve Higgins was her excellent natural best. So, go Ireland. However, I’m a long time comedy fan, and while I love Irish comedians, I’ve seen most of them a lot, and will see them again, this festival was about the big names from abroad.

I’ll list them here with a quick note on each.

He’s on American TV shows like Parks and Recreation (as The Douche), The League and his very own Kroll Show and he’s in movies like Adult Beginners, I Love You, Man, and Date Night. So, he’s a big deal. The thing about him, interestingly, is that he’s not really a comedian. Like, he’s very very funny, and a great character/sketch actor, but he’s not a proper stand up. The second interesting thing about that is that he was very funny and did a very good stand up set. The best parts of his set were when he went into character or did a line in someone else’s voice, but overall he was very enjoyable.

“GOOD COS I’VE GOT SIX OF THE CUNTS!”

This is Nick Helm. You have to do his dialogue in all caps because he has the graveliest (most gravel like?) voice I have ever heard. And yes, I think that includes Tom Waits.

Nick Helm starts his show that way, above, and he keeps the energy and confrontation up throughout. He then proceeds to tell six ‘joke’ jokes with the sort of punchlines that make you go, “oh god, haha”. But when Helm does them, he shouts them and he thrusts his pelvis explosively for emphasis, and if the audience doesn’t laugh, he’ll keep roaring and giving out and repeating the joke until it’s funny again and everyone gets on board. Nick Helm is amazing and I love him.

I had the great pleasure of meeting Aparna before I saw her set because we have a mutual friend. She’s lovely and hilarious, which is ideal, in the industry. I mean, you can be a dick if you want, as long as you’re hilarious, but you’re always better off being lovely. Aparna has a very laid back style, maybe the most relaxed I’ve seen. But her lines are acute and she get’s right to the heart of what’s funny in an image or situation. Actually, no, not to heart of what’s funny, somewhere else, off centre, because she never brought a line or story where I expected it to go. That’s what’s interesting and engaging, and that’s why she was introduced on stage as the queen of New York. Which she immediately dismissed on stage saying, “it’s great being overseas cos you can claim to be whatever you want”.

She was also on Conan, which is very cool.

I didn’t know Lolly Adefope before last weekend, but I went to see her because other people were talking about her, and I’m glad I did. She’s young and new on the scene (but already getting invited to international festivals). She was brilliant. She’s a character comedian, so she was in character for her entire set as ‘Gemma’. Gemma is hilarious and annoying and we all know someone like her. She’s self-involved and she thinks that everyone says she’s funny so she becomes a stand up (a really bad one), but that all makes for a great character performance. I became a fan. Have a look at this video, she does ‘Gemma’ in it and she totally transforms her mannerisms and voice.

A lot of people will know him from Adam and Joe or his TV show BUG. Or just from him being a totally excellent man. He opened with a wonderful in depth song about bald men with glasses, it’s quite an important song so I’ll link to it here. Also he danced and it made me happy. He had a great presentation which did include a cat with boobs exploding between every slide. There were funny videos with him in them and he told stories in his very elegant voice. It’s kind of hard to explain it was very visual. This might help; David O’Doherty (internationally acclaimed comedian and winner of the Oscar of comedy at the Edinburgh Fringe) was next to take the stage after Adam Buxton and he said, “I don’t know how I’m supposed to follow the funniest thing I’ve ever seen.” 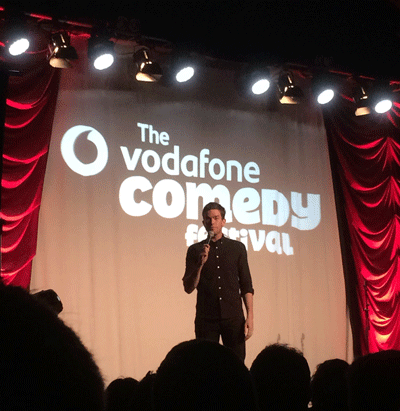 Now for one of the funniest things I’ve ever seen. I know that I’m not going to do this justice. John Mulaney did about half an hour on Thursday night and instantly became one of my favourite comedians in the world. It’s hard to explain how funny someone is, you kind of have to go and see him. Or watch his comedy special: John Mulaney – New In Town. It’s on Netflix, I believe.

He did material about Live Line which was stunning and he had only heard the radio show a few hours before he took the stage. Then he did a bit in which a cow was a metaphor and it was maybe the tightest piece of comedy I’ve seen. Or the bit with the duck. Or the Happy Birthday Banner.

Ok, I knew it, I’m not doing it justice. I can’t tell you how great it was. I can tell you that I went to see him again on the Saturday, because I genuinely think I would have been insane not to. He had listened to Live Line again and added more material to the bit and questioned why Irish people ever do anything else. There are loads of previous episodes up on RTE.ie and you can listen anytime, “so why are you all here? Why do you do things? Why aren’t you all at home listening to Live Line?”

John Mulaney is my favourite, he was the best, I love him.

Here’s HeadStuff Humour Editor, Alan Maguire, with a little more on The Mess Around:

Hello, Alan Maguire here, the other Alan. I don’t live in Dublin so I was only able to attend one day of the festival and even though there were several long-time heroes of mine (Buxton & Helm) performing, I decided to see The Mess Around. It was a very good decision. Ever since I became aware that Giles Brody and Colin Chadwick were doing a monthly sketch show I’ve had a gnawing sense of FOMO because of course it’s going to be great. How couldn’t it be? Look at all the people in that photo above. Hilarious geniuses all.

So I had high expectations and they were easily exceeded. Chadwick and Brody have an easy rapport that gives their high-concept sketches a natural, improv feel while still being very, very, I-have-a-headache-because-I-can’t-stop-laughing funny. The guest stand-ups (David O’Doherty, Eleanor Tiernan, and Alison Spittle) kept the intimate, anything goes vibe going and the closing song was a masterpiece. To say anything else would be a spoiler because you’re definitely going to go and see the Mess Around aren’t you? Yes, of course you are.

Colin Chadwick & Giles Brody have created something very special with The Mess Around, experience it for yourself in Anseo on Monday August 3rd.

TV Preview | Ash Vs Evil Dead – The Boomstick is Back