Hi guys and welcome to Tittererer’s Digest. I usually like to start things off with short ramble about what’s been going on in my life this week. I like to think it puts everyone at ease and allows them to dive into the column below feeling comfortable and relaxed. However nothing really happened this week and, to be honest, it’s filled me with a sense of foreboding and dread – a burrowing worry that my life is stagnating and that I may never achieve any of the goals I’ve set for myself. I spent a large chunk of the last seven days considering how insignificant our existence is. But I won’t go into that here as it’ll only bum you out. Anyway, by way of a fuck you to the inescapable realisation that none of this actually matters, on with the comedy round-up…

The clip that gave me most enjoyment this week was not a comedy clip. It wasn’t made this year, let alone this week. So I guess I’m on thin ice here presenting it as this column’s clip of the week. It’s an Irish short film with more than a faint hint of Tommy Wiseau’s The Room. I don’t present this to be mean. This is a guy simply trying to express himself and, at the end of the day, that’s all any of us are trying to do. On the face of it, enjoying films like this can seem a little snarky, but as demonstrated in the hugely enjoyable Best Worst Movie (a documentary about the roundabout success of Troll 2) there is genuine love and affection in the world for these kinds of films and for the people who make them. Anyway, I hope you enjoy Ricardo Romeo Pierre Vila’s The Celebrity Stylist as much as I did. [dailymotion id=”xvnq3f” align=”center” autoplay=”no”] Thanks to Tom Rowley (of the phenomenal Storymap) for sending me this. 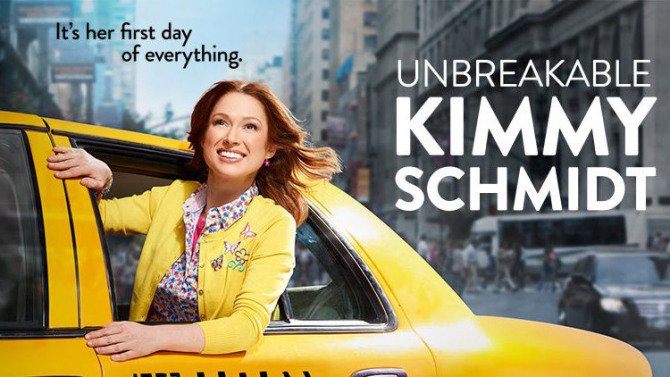 Season One of Tina Fey and Robert Carlock’s much anticipated (by me anyway) follow up to 30 Rock was released in its entirety on Netflix this week. Unbreakable Kimmy Schmidt is about a woman who has spent the last fifteen years in an underground bunker as part of a doomsday cult. When she is finally rescued, she begins a new life in New York. This show was originally commissioned by NBC only to be farmed out to Netflix before it was even broadcast. Although this shouldn’t be seen as indication that it’s not very good. On the contrary. It’s probably just not the kind of good NBC were hoping for. After all 30 Rock, despite being a massive critical success, was never a ratings hit. You could argue that, given its subject matter, Kimmy Schmidt is even less likely bring in big numbers. All the 30 Rock magic is there. Smart, snappy dialogue with a mind-boggling gag-rate. Keen observation mixed with grotesque silliness, it’s certainly got that Fey/Carlock feel. Ellie Kemper is simply perfect as Kimmy – full of wide-eyed enthusiasm without skimping on the dark edge. Tituss Burgess (30 Rock’s D’fwan) is wonderful as Kimmy’s wannabe Broadway star roommate – as is Jane Krakowski as her boss – an Upper East Side mother desperately trying to conceal her Native American heritage. And look out for Martin Short’s stomach churning cameo in Episode 4 as an hilariously malformed plastic surgeon. Also, it has the best theme song to a sitcom in a very long time (made by The Gregory Brothers – the guys who created this). [youtube id=”WYNbp0u8WjA” align=”center” autoplay=”no”] Unbreakable Kimmy Schmidt is available on Netflix right now.

Ooh, when this popped up on my podcast feed this morning I got very excited. Very excited indeed. I’ve met a few celebs in my time. Oh yes. Lionel Blair asked me for directions once. He didn’t actually seem that interested in my reply though. I think he just wanted me to go ‘Wow! It’s Lionel Blair’. I didn’t though. I played it cool. In fact, the only time I’ve ever gotten star-struck was when I met Stewart Lee in Edinburgh. I was doing a short spot at a mixed bill show in The Stand and he was doing his full show on the same stage afterwards. I was lingering back-stage when he wandered in and asked if it was OK to put his guitar down on the couch next to my jacket. I mumbled something to the effect of ‘yes’. I haven’t listened to the podcast yet, so I’m not sure whether this event has made it into his chat with Jarlath Regan or not. Probably not, to be fair. But I’m sure it’s going to be fascinating nonetheless. An Irishman Abroad with Jarlath Regan is available on Soundcloud and iTunes. [soundcloud url=”https://api.soundcloud.com/tracks/194758121″ params=”color=ff5500&auto_play=false&hide_related=false&show_comments=true&show_user=true&show_reposts=false” width=”100%” height=”166″ iframe=”true” /]

– Will Forte’s new comedy Last Man On Earth is currently airing on Fox in the States. It’s about exactly what you’d expect it to be about and it looks quite brilliant. [Read More Here]

– Selena Meyer is back and this time she’s got the top job. The trailer for Veep season 4 has drr-opped! [See It Here]

That’s it for this week. And I have to say, I feel a lot better for it. I’m ready to take on the week ahead with renewed vigour… and a genuine… sense of positive… oh, who am I kidding? *disconsolate sigh*
@Shaneinho

Can Mumford & Sons follow in the storied footsteps of Bob Dylan?