Hello, I’m back. I’m married now, I’ll be bringing my new “married” vibe to Tittererer’s Digest from now on. It’s exactly the same as my unmarried vibe except I sometimes mention my wife during anecdotes. I’d like to thank Giles Brody and Shane Langan for producing two beautiful bouncing Digests while I was on my honeymoon and also curse them for being effortlessly better at Tittererer’s Digests than I am. Luckily, several exciting things are happening in the world of comedy, primarily GHOSTBUSTERS. Let’s meet up below the picture of the sad woman and talk about NEW GHOSTBUSTERS.

GHOSTBUSTERS News of the Week

But seriously though, LOOK AT THEM. Look at that car. Look at the uniforms. Look at Leslie Jones. Look at Melissa McCarthy. Look at Kristen Wiig. Look, just look for a second god damn you for the love of all that is holy, at Kate McKinnon. The new Ghostbusters film is going to be so, so good. I can feel it. I’m aware that I’m not being objective here but LOOK AT THAT PICTURE. “Squad goals” has reached peak meme and I apologise for driving one more nail in its coffin but that picture, that right there, is Squad Goals.

Comedy Table Quiz of the Week 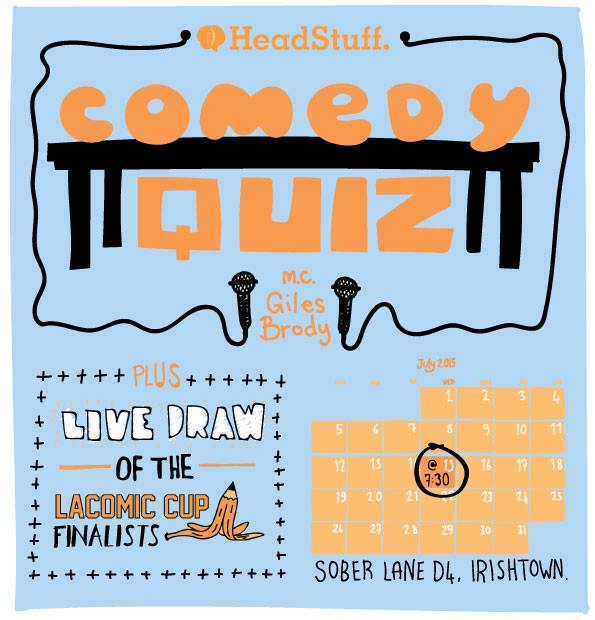 We’re holding a table quiz in Sober Lane D4, Irishtown at 7:30pm on July 15th! All the questions will be about comedy! Which means none of them will be about sport! You’ll get to see the very fetching Giles Brody in the flesh and maybe win a prize? The prizes are tickets to gigs by people like Dylan Moran, Dara O’Briain, David O’Doherty, John Mulaney, Nick Kroll, and Maeve Higgins i.e. The Best People. It’s four people per team and €5 per person which should come as no surprise if you’ve been to a table quiz before. If you haven’t been to a table quiz before then prepare to have your mind BLOWN; basically a person (in this instance, a man) asks questions and you write down the answers and whoever answers the greatest number of questions correctly wins a prize at the end! Fun right? Also, there’s going to be a raffle and if you’ve never seen a raffle before then holy shit son, have you got a good time coming your way.

Also, we’ll be announcing the 32 finalists of our Lacomic Cup. So hopefully some of those 32 finalists turn up otherwise we’ll all be standing around clapping for nobody.

So yeah. Come to our table quiz in Sober Lane D4, Irishtown at 7:30pm on July 15th. The questions will be good, the M.C. will be dashing, maybe there’ll be celebrities there? Probably not. But maybe! Ok, on to the next thing.

Clips of the Week

And finally, The Most Relatable Sketch Of All Time from College Humor

Parallel Pride: The Surprising Link Between N.W.A and Perfume Genius

A Friendly Chat with The Mess Around