Hello, It’s just me, Alan, this week. Ellen’s sick. So the brand new improved Tittererer’s Digest With Alan and Ellen lasted one week. Cool. This week is Tom Hanks heavy because I love Tom Hanks and thought he was great on SNL last week. Also, I’m quite sleepy.

So Tom Hanks hosted SNL this week and he was really good. What an excellent review. Well done Alan. Anyway here are the sketches I liked.

Ok so, the first one is Black Jeopardy. Smart people with incisive things to say about intersectionality have analysed this one and said why it’s important so I won’t try. It’s smart, funny, and important. How often do you see that? Rarely.

I saw Sasheer Zamata, who plays Keeley in this, do stand up at the Vodafone Comedy Festival and she was so good. A lot of the American comics tried to change their sets to better suit an Irish audience but she was like “Nope, you’re getting twenty minutes about race relations in America and you’re gonna like it.” And she killed, everyone loved her. What a happy story. Support live comedy you guys.

The next sketch doesn’t feature Tom Hanks but it is still very good which is the highest praise imaginable. Aidy Bryant, Cecily Strong, and Vanessa Bayer get messy for Halloween.

I did the NBC Studio Tour when I was in New York and got to visit the SNL set. Did you know that only about 75 members of the audience are members of the public? The rest are all invited guests. This minimises the risk of someone trying to interrupt the show and get themselves on television. You’re learning stuff. Also, they have Tina Fey’s Sarah Palin costume in a glass case preserved forever.

Speaking of iconic costumes, here’s David Pumpkins. Just typing that name has given me a fit of the giggles. This hits me in exactly the same spot as two of my other favourite sketches of all time, Conan O’Brien’s Rublight and Bill Hader’s Alan. I love this so much. Just so much. Tom Hanks is a weirdo. He plays dependable everyman dad types but he’s a stone cold oddball. Keep Hanx Weird you guys #KeepHanxWeird. 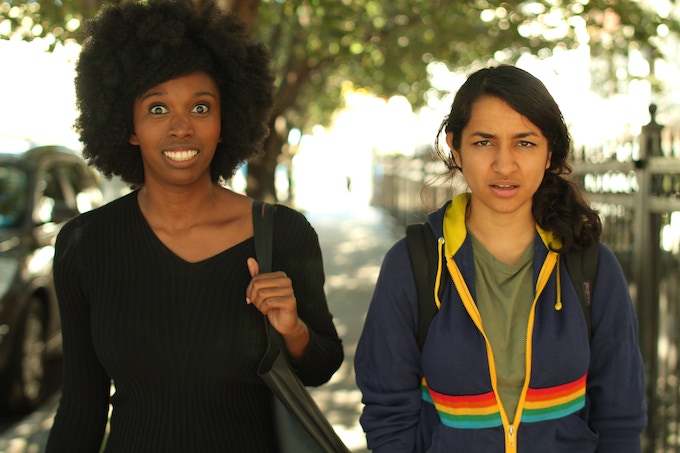 I’ve featured Rekha Shankar’s work here several times both as herself and as part of DUMB. It’s fair to say I’m a fan so I’m very excited that she has a Kickstarter for her new series Hustle. You can read all about it here but basically if you think there should be more WOC fronting TV shows and you also like Broad City and Scott Pilgrim (probably my favourite movie of all time so me, this is aimed at me) you should check it out.

Edit: Someone bought one of the $300 tiers as I was writing this. That’s cool.

VIDEO: Enda Kenny and his long suffering chief of staff discuss their plans for the weekend. pic.twitter.com/kTwRNyHuJ7

Our good friend Giles Brody has started making videos for media behemoth Joe.ie. This one is about Enda Kenny wearing a mask and is v good.

Shane’s back to unsettle us with his sketches. Hello Shane.

You’ve subscribed to The Alison Spittle Show right? Good. Alison is so popular and brilliant that she’s moving her show downstairs to the big room in the Workman’s this Friday. It was inevitable really. Her guests this time round are Joanne McNally and Mattress Mick with stand up by Shane Clifford from item 4 just above there. It’ll be great. All the “deets” here

6. Ten Whole Minutes Of Kate McKinnon Being A Genius

(Hello, there was a video here of Kate McKinnon outtakes from Ghostbusters but the copyright meanies took it down. I guess we have to go and buy Ghostbusters on DVD now.)

7. Irish Comedian of the Year at the Vodafone Comedy Carnival

The final of the Irish Comedian Of the Year competition is taking place TONIGHT (Oct 27th) in Galway’s Town Hall. It’s hosted by Andrew Stanley and the winner gets two thousand (2000) euro and a trip to perform at the Perth and Adelaide fringe festivals. I know right? But who are the finalists? I got you boo. The finalists are

Remember their names. In a way, being mentioned in Tittererer’s Digest is the real prize here. It’s the dream of every up and coming comedian. Don’t @ me.

We have five (5) ((cuig)) pairs of tickets to give away so head on over to the HeadStuff twitter account (@thisheadstuff) to find out what you need to do. Something eldritch probably what with it being Halloween.

Ok, that’s it. Join me in wishing Ellen a speedy recovery. Hello Ellen, get well soon. Goodbye everybody, goodbye.