Embrace the World | Supergroup Single in Aid of Autism Charity

Cork singer-songwriter Kevin Walsh has launched a crowdfunding campaign in support of his debut single, ‘Embrace the World’. Proceeds from the track will be split 50/50 between Kevin and AsIAm—an Irish autism charity. Kevin, who was diagnosed with autism at the age of five, chose AsIAm for their commitment to education, empowerment, advocacy and community. On the musical side of things, Kevin’s inspiration for the supergroup approach came from projects like Band Aid and Irish Women in Harmony.

For the recording process Kevin drafted in a host of talented Irish musicians, many with links to MTU Cork School of Music, where Kevin graduated with First Class Honours BMUs and MA degrees. Among those involved are producers Keith Clancy and Aidan O’Mahony, string musicians Maria Ryan and Lucia MacPartlin, and artists Christopher Hockey, Mark O’Gorman Daly, and Jake O’Driscoll.

In addition to those already involved, a diverse range of other vocalists are ready to get on board. Limerick singer-songwriter Emma Langford, rock/metal artist Mark Daly, West End performers Molly Lynch and Caroline Kay, Moon Looks On frontman Stephen Gormley, and soprano Lisa Curran of Tralee Vocal Academy are set to lend their voices. Speaking about his ensemble crew, Kevin said:

“Not only are these amazing artists, but their degree of social consciousness is incredible, the dream is to get other top Irish and international singers involved too—artists of the highest class, calibre and connection!”

This approach of embracing a wide range of sounds within a single song also serves to illustrate the wide-ranging nature of autism diagnoses. As musical styles vary, so too do the needs, limitations, and abilities of each different person diagnosed with autism. This clarification and celebration of differences under the umbrella of autism is an important aspect of the project for Kevin and his team.

On the visual side of things, RSVPIreland.net project manager Yvonne Coughlan, an award-winning director/screenwriter, and Maurice Supple of blue shed productions will be working together on the music video for ‘Embrace the World’. The video will portray the experiences of Kevin and his mother Cathy in overcoming the obstacles they have faced, with performances from actors and cameos from the supergroup vocalists. Ahead of scripting the video, Yvonne interviewed Kevin and Cathy about their difficult journey to this point in Kevin’s career. 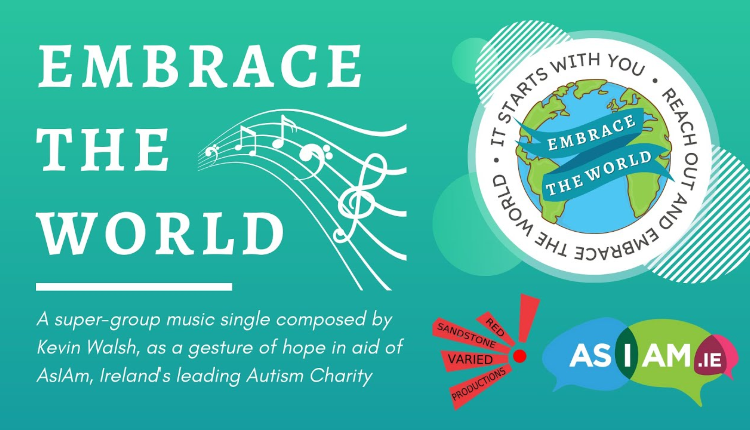 ‘Embrace the World’ arrives later this year. For now, you can support the project and follow its progress here. To learn more about how you can support autistic people in Ireland, check out the AsIAm website.

“I Love My Blue Alien Wife!” Changing Relationships in Mass Effect and Beyond