*Content Warning: This article will feature references to suicide from the beginning*

“There aint no scapegoats left to blame

We brought this on ourselves,

when we could have been the change

So cut our throats

You would be forgiven for confusing the above sentiment with something written about “Brexit Britain” in early 2019. The Brexit debacle drags on, with no indication from the weak Tory majority about what is happening, what the future holds, or even what they want. To be fair, at least those in power stuck around, unlike the politicians who caused this and promptly jumped ship. There is frightening talk of shortages, be it food or medical supplies. Terrifying implications for the Northern Irish peace process, if there is to be a hard border. Danny Dyer became an unlikely voice of the people, expressing a nation’s confusion on Good Evening Britain – “no one knows what it (Brexit) fucking is”.

Debate and infighting over the vote has shown the public to be more fractured, more polarised than at any other point in recent history. Some commentators argue that the Leave win shows a frightening rise of far right populism. Others suggest that it demonstrates the presence of a silent majority in the UK. A “forgotten Britain”, disenfranchised with the political elite. Leave and Remain voters are united only by mutual disdain for each other and their shared confusion about what’s actually going on.

Great Britain may not be literally dead, but the concept of shared national identity has never felt further away. What’s surprising is that these are, in fact, the final lines uttered by Gallows frontman Frank Carter on the bands sophomore release Grey Britain – an album released nearly ten years previous. 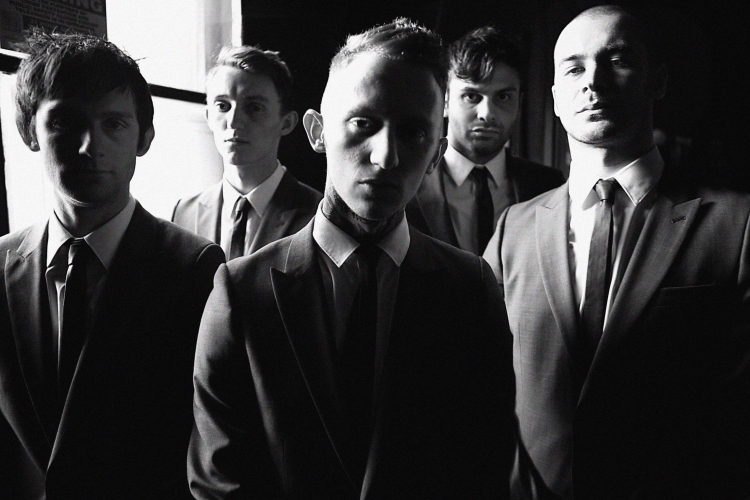 The Watford band exploded out of the gates in 2005, with a debut line-up consisting of guitar player Laurent “Lags” Bernard, bassist Stuart Gili-Ross, drummer Lee Barrat, guitarist Steph Carter, and Stephs brother Frank on vocals. The band made waves beyond the hardcore scene that birthed them, largely because of their fearsome live shows. A huge part of this was Frank. Frequently performing shirtless, jumping in the crowd, Frank cut a distinctive presence. Skinny, ginger, with prominent chest and neck tattoos, Frank looked frightening. There are plenty of videos of Frank fighting with crowd members that make him look even scarier. Of course, in interviews the dude comes across as smart and friendly, if a little troubled. But first impressions count, eh?

Feted by the likes of then relevant (and still in print) NME, the band released their debut Orchestra of Wolves before signing to Warner Bros for a princely million pounds. This was regarded by some in the oddly conservative punk circles as “selling out”. Heaven knows what Warner Bros wanted from the band beyond an “edgy” acquisition. However, the band took the label’s money and made a confrontational, abrasive and insanely progressive record, stretching beyond the boundaries of hardcore – a “punk Floyd” if you want to be cute.

The album has sprawling cinematic string sections, atmospheric sound design (including the sound of a dying pig that the band was rumoured to have recorded in a Halal slaughterhouse – it was actually a sample) and a semi acoustic track – ‘The Vulture Acts I and II’, where Frank breaks up his powerful screaming with some melodic singing. The guitars are stripped back, influenced by Black Sabbath, and some of the heavy riffs are more akin to metal than anything punk.

The album was an unapologetic state of the nation piece. But, if this was years before Brexit, what were the social ills the boys were talking about? In 2009 Gordon Brown’s Britain, like the rest of the world, was in the midst of the biggest recession my generation has ever lived through. The banks had failed, people had lost their pensions. It was a time where people had lost faith in traditional institutions. On the final track ‘Crucifucks’, Frank lays out his litany of targets: “The London Metropolitian, all the fucking clergymen, child abusers, national front, rapists, racists, all fucking scum”. The inclusion of those institutions which were once pillars of trust – police and priests – is telling.

Organised religion in particular catches Carter’s ire on ‘Leeches’, ‘The Great Forgiver’ and the aforementioned ‘Crucifucks’. The Carters were raised Catholic but Frank abandoned his faith when a local priest had been discovered to be a paedophile. On ‘Leeches’ he sings about “burning all your churches down”. Elsewhere on ‘Queensbery Rules’ Carter talks about knife crimes, urging a return to a time when problems were dealt with fists rather than knives and castigating the listener for reading the “filth” but forgetting the victims’ names. On ‘Death Voices’ and the aforementioned ‘The Vulture’, Carter invokes biblical mythology, particularly the myth of the Four Horsemen. ‘Misery’, likewise, is not as overtly political, but a straight up ode to depression written at Carter’s lowest ebb. Carter screams on this track, “Misery fucking loves me”.

What’s most relevant from the album in 2019 is the hopelessness and the lack of a clear solution. The band at the time reiterated the sentiment that the album is not offering an answer. The idyllic optimism of some punk music, the “you can’t take us down” sentiments, are entirely absent. Instead the album simply says that the country is ruined and that we are all to blame. The album suggests that the only thing to do is to give up. It’s understandable that people could feel the same way about the current situation in the UK.

This was the last album released by the band with Frank as vocalist. He left Gallows in 2011 in a very public departure. Frank went back to tattooing and formed the very different, much more melodic band, Pure Love (sample lyric: “I’m so sick of singing about hate it’s never going to make me change”). He then returned to heavy music with his band Frank Carter & The Rattlesnakes. I’ve seen the Rattlesnakes live and he’s still an amazing performer.

Gallows made the decision to go with a very different replacement singer, perhaps wisely. Instead of looking for another svelte ginger Londoner they recruited a large Canadian man, with a very different voice, in the shape of former Alexisonfire singer Wade MacNeil. After an amazing comeback show, dissuading any post-Frank naysayers, Gallows released the bruising Death is Birth EP, followed by 2012’s amazing self-titled Gallows. I haven’t listened to 2015’s Desolation Sounds but I rate both incarnations of the band with the proviso that they are very different entities with totally different sounds. Gallows went on hiatus around 2015, for 3 years, whilst MacNeil reformed Alexisonfire and the other members formed bands like Krokodil, Gold Key and Funeral Shakes. Gallows are coming back together this year to play the UK’s Slamdunk festival.

No matter what the future holds for the band, it’s clear Grey Britain remains a brilliant and, unfortunately, frighteningly relevant album.

Pads Thompson (She/They) is a library assistant, podcaster, dj and recovering goth. They host the 8th Dimension podcast - a podcast about odd and obscure films that has covered movies like Party Monster, Fatal Deviation and Mandy. You can find it at @8thDimensionPod on twitter and on iTunes, soundcloud and all podcasting apps. Go on listen, all the cool kids are doing it!

Fintech and the Rise of Hipster Banking in Ireland

7 of the Scariest Moments in Resident Evil Games