This weekend, New York rapper Nas makes the trek to the midlands of Ireland to perform his 1994 debut album Illmatic in its entirety at Mullingar’s Life Festival. Widely recognised as a classic in the rap pantheon and hailed by many as one of the greatest albums of all time, we delve into the mass hysteria that surrounds one of hip hop’s most mythical artefacts and look at five reasons why it continues to resonate and fascinate more than twenty years after its release.

The man born Nasir Jones had been steadily making a name for himself in rap circles for a couple of years prior to the recording of his first album. The world’s first glimpse of “Nasty Nas”, as he was then known, was his eye-catching cameo on Main Source’s ‘Live at the Barbeque’. The song – an aggressive posse cut on which he famously rapped “When I was twelve, I went to hell for snuffing Jesus” – introduced him as rap’s new enfant terrible and anticipation began to grow as to what he would do next.

These controversial early rhymes were enough to get people to sit up and pay attention but those who were expecting more of the same on Illmatic were in for a shock – the young rapper was aiming for something more soulful and introspective on his debut full length.

The lyrics on the record – delivered in complex rhyming patterns and utilising clever wordplay – veer close to poetry and are steeped in local street slang. They look at life through the eyes of troubled teenager to whom murder, incarceration at a young age and urban poverty were everyday things. Nas’s tone alternates between philosophical (“The buck that bought a bottle could have struck the lotto”) and self-aggrandising (“Nas is like the Afrocentric Asian, half-man, half-amazing”) but his words are never short of memorable.

The quotables birthed on the album have since seamlessly become part of the hip hop lexicon. Nas himself has revisited the album on several occasions to craft hooks for new songs and even his great rival Jay Z is guilty of twice having used vocal samples from the album on tracks from his early days.

Hip hop is sewn into the fabric of New York. The streets are always listening for the next great rapper to carry the city’s torch and Nas’s early verses had not fallen on deaf ears. When it came time to get in the booth and lay down tracks for his hotly-anticipated first LP, the teenage MC found he had producers queuing up round the block to work with him.

The finished record features a roll call of the most sought out producers from the hip-hop landscape at the time including the likes of Q-Tip, Pete Rock, Large Professor and DJ Premier, who all offered some of their best material for the Queens native to weave his rhymes around. From the mournful soul of ‘Life’s a Bitch’ to the menacing off key piano notes that set the scene on ‘N.Y. State of Mind’, the production remains top notch from start to finish. The beats belong to the classic NY boom-bap tradition; the drums are heavy and the samples draw from r’n’b, jazz and funk.

Many of Illmatic‘s soundscapes are inspired by the music of Nas’s youth. The rapper pleaded with DJ Premier to create a beat from the Rueben Wilson sample that makes up the basis of ‘Memory Lane (Sittin’ in the Park)’ as the producer had initially felt it sounded too nice for the young rapper who had made his name riding over grimier productions. While on ‘Life’s a Bitch’, Nas’s musician father Olu Dara (the man who would go on to be eulogized warmly on ‘Bridging the Gap’ and less kindly on ‘Papa was a Playa’) shows up to blow a mournful trumpet solo as the track fades out. These touches, like the record as a whole, link the old and the new, paying tribute to the past while simultaneously looking to the future.

Bluntheads, fly ladies, prisoners, Hennessy holders – these were the people that a young Nas envisioned as his listenership on the intro of ‘Memory Lane (Sittin’ in the Park)’, and though this might have been his initial audience, it wasn’t long before the rest of the world started to take notice too. While his project window faced “shootouts, drug overdoses”, Nas could see past his immediate reality and was able to place his tales in a wider context.

“Really, the topics that I talked about were topics that were around before ‘Illmatic’; streets, social economic status, people’s struggles”, Nas told Clash when asked to expand on some of the album’s themes in an interview on the 20th anniversary of the album last year. While these topics might not necessarily have been ground-breaking, the manner and the skill with which they were tackled was. Nas’s pen was like a scalpel and his poetic depictions of a community coming out the far side of the 80’s crack epidemic and Reagonomics helped explain what was going on in New York at that time to the wider world.

British director Andrea Arnold selected ‘Life’s a Bitch’ as the song to play over the closing credits of her film Fish Tank, a portrait of hopeless youth on a British council estate, and it is a testament to the song that it sounds as poignant against the grey concrete of East London as it does while cruising through Queens in a Six cab on the way to Jones Beach.

In recent years, it has become somewhat of a cliché to see a picture of a child on the cover of a hip hop album. Lil Wayne, The Game and Kendrick Lamar have all gotten in on the act, but it was Nas who started the trend with the now iconic image of himself as a seven-year-old superimposed over a backdrop of faded New York streets. 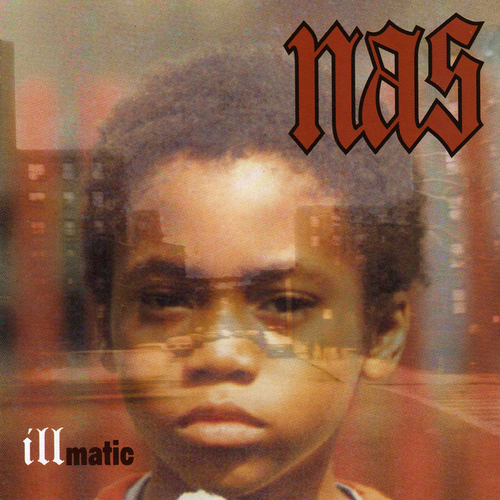 It has become one of rap’s most enduring images and it didn’t go unnoticed at the time either. Less than five months after Illmatic had been released, another seminal New York rap record appeared in the form of the Notorious B.I.G’s Ready to Die and some couldn’t help but notice the similarities between the two album’s artwork. This was noted the following year on Raekwon and Ghostface Killah’s ‘Only Built 4 Cuban Linx’ where the two remarked on the “biting” they felt was present in the game and Nas would go on to explain the situation in fuller detail on his 2002 album God’s Son. Though he and Biggie never came into direct conflict, there were plenty of subliminals traded between the two over the years.

In many respects, Illmatic has been an albatross that has clung to Nas since its release. Throughout the late 90s, as he experimented with a then in-vogue Mafiosi character and the excesses and materialism that accompanied it, many fans couldn’t help but wish that he would return to his earlier, more soulful incarnation. Even during his early 2000s renaissance amidst the Jay Z beef and triumphant return with Stillmatic, many critics still complained that they missed the “old Nas” they had encountered on his debut. While it will forever be the yardstick that Nas will be measured against, it has also become the benchmark that any rapper who aspires to have a classic debut must be judged against – the most recent example being Kendrick Lamar’s 2012 debut studio album good kid, m.A.A.d city.

Warmly received upon its release by critics and fans too long starved of the conscious, thoughtful lyrics and innovative storytelling that had once been common place in the genre, good kid, m.A.A.d city might not have sounded old production wise, but its lyrical preoccupations, songwriting and metaphors drew from the same well that Nas had mined from so successfully two decades prior. Only time will tell if it will continue be the bar that the next generation of artists will be judged by.

So, there you have it. Still don’t believe us? Dust off an old copy of Illmatic, pop in your headphones, hit play and, as the man himself says, it ain’t hard to tell.

Nas plays Life at Belvedere House, Westmeath this Sunday, May 31

Robert Higgins is a writer and journalist originally from Longford. His work has appeared in Irish Examiner, Irish Independent, Hot Press, Wordlegs, the Galway Review as well as anthologies by Doire Press and Abandoned Darlings. His work has also been featured on RTE Radio Ones Arena. He currently lives in Dublin where he is completing his novel. He is represented by the Marianne Gunn OConnor Agency. He tweets @roberthiggins89

Poem of the Week |3| Spiders and Bees