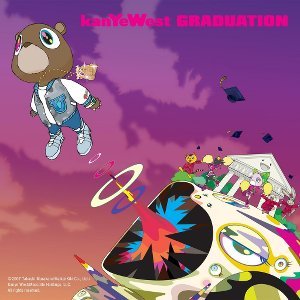 Curtis Jackson wept. How the burly-voiced Queens behemoth found himself in a chart battle with Kanye West is something he’ll question long after hanging up his orange headband and bulletproof vest. A dozen years after the Blur and Oasis throwdown and America finally had its own heavyweight clash: Ye’s Graduation versus 50 Cent’s Curtis. But there would be little reprieve for Jackson. The truth is he was battered, beaten and left for dead – nothing to comfort him but a bottomless Hennessey fifth and eternal ounce of dro.

50 was a hip-hop superpower in 2007, his four-year ascent to the summit of pop culture infamy fueled by well-worn gangsta rap tropes and spotless Dr Dre beats. But Curtis would never fully recover from the loss – his empire brought down by a bohemian beatmaker-with-a-backpack perfectly primed to make that final step from behind the boards to the stadium stage.

You know Kanye as the superstar – that tabloid-friendly dignitary who caused social media to eat its own head when he suddenly put Wiz Khalifa between his iPhone crosshairs. He’s the international super-villain who declared himself the greatest living rock star on the planet at a festival he was told he’d no business being part of. But even the god hasn’t been an ever-present. He didn’t sprout up from the earth’s crust fully-formed and begin walking the earth in Yeezy Boost 350s. West craved the mainstream spotlight his early singles afforded him. Graduation solidified that celebrity, and with it came a seismic shift in the hip-hop landscape.

The third volume in his education-themed series (the fourth, A Good Ass Job, will almost certainly never come to be), Graduation was fuel in Ye’s private jumbo jet – the record that took him from the preppy MC who channeled the spirit of his golden age heroes of ’93 to an arena-filling futurist. It was the natural final ascent in an arc that began with an infamous appearance on a Hurricane Katrina benefit and ended on an MTV Music Video Awards stage next to a bemused Taylor Swift. 50 might once have ruled the streets, but West wanted to rule the world – and he was going to take it over from a synth-powered starship, behind a pair of plastic shutter shades.

If Kanye’s first two albums are headphones classics then Graduation is all about throwing hands in the air. Largely gone is the chipmunk soul of The College Dropout and baroque pop of Late Registration, replaced by a moonage daydream of synthpop, europop, arena rock, electro-R&B, electronica and the Chicago house music young Ye once swayed to in his hometown clubs. It’s a sweeping polyphonic tapestry that drains the quaintness (and the skits) from West’s sound, pushing its creator way into widescreen CinemaScope.

Do androids dream of electric beats? If Blade Runner’s cyborg seductress Rachael had a heart that beat for hip-hop then Graduation would have been programmed right into her hardwiring. These are synthetic songs with an organic pulse – a neon-lit glimpse into a high-tech future of Daft Punk cybernetics and skyscrapers built on synthesizers. Can you listen to ‘Stronger’ and not hear the thump and shuffle of alien technology? The glitzy keyboard riff of ‘Flashing Lights’ hits like a hyperdrive shift towards pop’s outer cosmos.

Inspired by the stadium-shaking U2 live shows he had once opened, Ye’s flow throughout is simplified and rhythmic. His choruses, more punchy and electrifying. Cop the slowed, halting delivery on ‘I Wonder’ (“I’ve been waiting on this my whole life!”), or the T-Pain-assisted anthem ‘Good Life’. These are hooks to raise hell – a hip-hop hooray of Zeppelin breadth and Moroder reverberation.

But despite West broadening his horizons, Graduation retains an intimacy, like a space-age record echoing through Sam Rockwell’s cramped starship in claustophobic sci-fi Moon. Most songs focus on cutting self-analysis – good, bad or otherwise – while conveying Ye’s ambivalent attitude towards his growing celebrity and expanding bank balance.

Kanye kept a blog at the time that I loved (remember those? A person’s own internet space before Twitter). On it he’d post pictures of expensive shoes, art installations and the models he especially liked. It bottled the interest in high-end fashion and consumer culture that has ran through his music since year dot. By Graduation, those gap jeans had been tossed out permanently. The Louis Vuitton Don was free to pop champagne on a plane while bragging about his Dior Homme threads. Financial privilege is a long-standing rap motif, but Kanye added a high-end, high-art sheen.

Yet the album plays like the full realisation of the discomfort West felt on ‘Diamonds of Sierra Leone’ as he struggles to make peace with his love of nice things. On ‘Good Morning’ he defines himself by the clothes he wears (“I’m like the fly Malcolm X, buy any jeans necessary”), while on ‘Can’t Tell Me Nothing’ he calls himself out for his own materialism (“I had a dream I could buy my way to heaven/When I awoke, I spent that on a necklace”). Evidence of the root of his thorny relationship with designerwear is found on ‘Champion’, when he recalls the work put in by his father to re-up his wardrobe before each school year started. Ye feels damned if he does and damned if he doesn’t – the natural end-point of the conversation would come on Yeezus masterpiece ‘New Slaves’.

This friction is there because Kanye West is a human being. He’s never been one to throw X-Pro filters on his lyrics, whether it be on brash declarations of strength (‘Barry Bonds’, ‘Stronger’) or late-night confessionals (‘Everything I Am’, ‘Can’t Tell Me Nothing’). On ‘Big Brother’ he details his life-long admiration for Jay Z and hints at the post-College Dropout tension between the two. It’s a stark divulgence that refreshingly inverts the usual posturing of rap’s male-dominated cliques.

So why is Graduation West’s weakest album? Not a bad album, of course – it’s a still a classic. It’s just less classic than the other classics in his 24-carat canon. Ye’s ability to mine the perfect guest spot is certainly missed. Chris Martin is just not a singer who should be on a West track, while peak-era Lil Wayne drops a bafflingly weak verse on ‘Barry Bonds’. And there’s an unease that hangs over some of the softer singles (‘Homecoming’, ‘Good Life’) that for the only time in his career, Kanye was second-guessing his instincts in order to chase radio play. He would eventually walk the tightrope between commercial potential and artistic achievement in an unbroken straight line with My Beautiful Dark Twisted Fantasy, but he couldn’t have done it without standing on his own shoulders.

There was also the tiff with 50, which, as Graduation engineer James Auwarter told me last year, put restrictions on West as he rushed to finish the record in time for the chart battle. “I think he regretted being under the gun,” said Auwarter. “It was the first time there was a force telling him when to stop.”

There’s no need to dwell too much on what happened next. All we need to know about the traumas in West’s personal life — and that award show moment – have been laid out on the daring, retro-futuristic synthpop of 808s & Heartbreak. But if the Swift humbling seemed like an almighty fall, it’s because of the great heights Graduation’s first-class shuttle blast launched Kanye towards. His head was in the clouds, shooting stars reflected in his eyes. This was DeLorean music with West behind the wheel, Pastelle jacket on his back, taking his sound to a strange new future no-one had dared imagine.

Dean is a music journalist and critic with bylines in Wax Poetics, NME, Pitchfork, Passion of the Weiss, The Irish Times and others.

The Week on Twitter | Clinton & Sanders, the General Election, and Matt LeBlanc

On Versatile’s Debasement of Hip-Hop

A Purple Sky: The Artistry of Prince