Created by artist Joanna Bain and musician/illustrator Julie Hawk (HAVVK), SelfMade is a platform for DIY musicians in Ireland. The pair have set out to craft a supportive space within the industry, with a strong emphasis on women in music. Be it through performance, discussion, workshops, or art. To do so, they’ve collaborated with a host of Irish musicians and creatives, all pushing for education, connection, and representation.

Ahead of the event, co-founder Julie Hawk and Le Galaxie’s Michael Pope were kind enough to answer a few questions for HeadStuff.

The idea that all artists are “a little bit mad” or that mental illness is somehow conducive to creativity never seems to go away entirely. Personally, I find this stereotype extremely damaging and detrimental to both creative output and mental well-being. Do you feel this stereotype is beginning to fade somewhat? Do we need to be more careful to avoid glorifying mental illness in this way?

Julie: I think this is definitely a very damaging stereotype and can have a skewed effect on what artists expect for themselves in terms of quality of life and well-being. If we grow up idolising the idea of being a ‘tragic artist’ then of course that’s the bar we’re going to set for our own happiness and fulfilment. Then there’s the fact that the music lifestyle is associated with staying out, drinking, being a night owl, and having a lack of structure generally.

I think it’s easy to miss warning signs of struggling with mental health and substances in that environment. But I do think there’s a very positive wave of conversations happening on social media where artists are using their own platform to take control of this narrative and I hope it will have a ripple effect on younger generations of musicians. And it’s meant that glorified language around mental health and self-destructive behaviour is being called out constantly. But it annoys me that this puts the onus on artists to self-organise. What SelfMade want to do is take some of that pressure off the artists and give them a platform to share their experiences in a more organised way.

Michael: I suppose the perception comes from each individual’s output and public persona. The recent Keith Flint tragedy would be a prime example. A furious, flamboyant and unhinged performer that was perceived as a “bit of a nutter” by the pop culture public but underneath obviously a man who was in a lot a pain and turmoil. It’s hard to know if he found it impossible to come to reconcile both sides of that but I do feel his label as an almost cartoonish madman cannot have helped as the years went on. The pressure to maintain that character must be overwhelming and intense.

In pursuing a music career, or making any kind of art really, vulnerability comes with the territory. You’re opening yourself up to all kinds of criticism. With the anonymity offered by social media, do you feel artists need to be extra careful in shielding themselves these days?

M: Some artists and creators are acutely invested in any online criticism be it reviews, comments, trolling etc. I’m not one of those. It’s funny, I tend to spend 80% of my day in constant worry but when it comes to good or bad social media feedback I really could not give a fuck. I find that if you’re out there as a public figure it’s very, very easy to ignore fatuous, baiting nonsense. If legitimately challenged on certain aspects of our art or career, I’m happy to engage. Keep schtum til you know you’re right.

J: Pursuing music is already a career that can put you in a vulnerable position because you’re putting yourself out there – you can easily end up depending on public opinion for validation, whether that’s through live audience, sales, radio plays, or reviews. But I feel like before social media, at least you could switch off from that more easily and take time to be more grounded in your own sense of what you’ve achieved. These days you can literally choose to step into the public eye at any second – you have it in your pocket constantly, and even when there’s no notification there’s always the temptation to check in.

This is totally unknown territory for us, and not only for musicians. I’ve found it really enlightening talking to other musicians about how they manage this by having designated screen time or muting notifications so that they are more in control of when they’re checking social media. I know Saramai from Pearly only uses a smartphone when she’s “working” and carries an old Nokia the rest of the time.

Mental health has certainly been given more of a platform in Ireland in recent years, but resources and funding are still sorely lacking. Do you feel that real progress is being made? Or is Ireland still short on serious funding and resources from government, etc.?

J: I would definitely say yes to both questions. I moved away from Ireland in 2012 and I come back a lot. At some point over the last few years, it felt like coming home to a different country. I was suddenly having conversations about mental health, self-care and other conversations about equality that I’m sure are connected in a huge way to the referendums we’ve had recently. It’s been so positive to have voices like Blindboy and Mango X Mathman talking openly about mental health – but obviously, this is another example of artists taking things into their own hands.

Seeing more events being set up by folks like IMRO is amazing too. But it’s not the only thing we should be aiming for. At the end of the day, it’s great to have these discussions and to see the stigma being fought, but we need to see real access to affordable mental health facilities for people working in the arts. That’s going to take time but at least now we are living in a culture that has seen that these kinds of conversations can lead to action and political change.

M: The government do next to nothing to encourage mental health discourse or provide improvements to mental health facilities and treatment through the HSE. They are utterly, entirely useless. It all seems to come down to individuals at this moment in time. A good, compassionate GP. A attentive and empathetic counsellor. A coffee morning for Pieta House. A survivor talking to Pat Kenny on the radio. We need each other. That’s where we make progress. Ourselves. This government are as ineffectual as they are apathetic.

Touring, in particular, seems to be a particularly gruelling aspect of being a musician. Ostensibly mundane but often mentally important things like eating properly and having some kind of routine are put on hold. What, if anything, do you feel can be done to mitigate this?

M: Sadly, right now a lot of this comes down to experience. The temptation to rock and roll all night and party every day is always there in the beginning. Waiting for load in? Pint. Post soundcheck? Pint. Ease the nerves before going on stage? Pint. Did it go well and you’re buzzing? Sesh. You’re there doing what you love with your best friends, it’s easy for every night to feel like a party. But there will always be a breaking point and now with mental health, wellness, mindfulness and understanding all being part of the public consciousness I think artists are realising there are ways to cope, and more importantly there are plenty of other ways to enjoy your career and you don’t have to be Pete Doherty.

J: I’m about to go on tour myself for about three weeks and I’m really excited but definitely wary of how I approach it. In my band, we’ve pretty much learned by doing – from staying out too late after every show or not setting aside enough time to switch off or just learning to be more aware of each other’s needs. If ever I’ve had a bad experience on the road, I’ve had to really examine what my boundaries are, what I can compromise on and what I will be an utter stickler about.

I think if you take the time to ask yourself those questions and have an honest conversation before you tour as a group, then you’re likely to have a much healthier tour. But that can be rough learning. I would love to see more workshops and online facilities about how to prepare for tour, not only in terms of booking and logistics, but also from a self-care perspective.

I’ve found that many people seem to have a kind of cognitive dissonance when it comes to the value they place upon art. People often hold a sort of “Well they should get a real job” attitude about aspiring, local musicians but are happy to shell out for expensive gig tickets to see international acts. Is there a way to change this culture around up-and-coming artists? To get the public to acknowledge the early struggles faced by virtually all musicians?

J: This is one of the fundamental goals we have at SelfMade but it’s really multifaceted. There are so many mixed ideas of what’s considered “success” in music. I think part of that can be helped by being more transparent about the work that goes in and about the fact that most artists are funding their own projects. But I think as musicians, we could also do with examining how harshly we define success. I know a lot of musicians who will be happy as long as they can play and make music regardless of streams and profile. I know artists who just want to play live and be on the road. And I know artists that want to tick any box they need to so that music is their only job.

Personally, I’m fascinated by all the side-hustles that artists do to support their careers and I sometimes wonder if we would do better not to cover them up. But as I said, it’s really multifaceted and we are learning more about how artists are perceived with every event we do at SelfMade. I do think it has to start by asking yourself what role you want music to play in your own life. If you’re clear on that, then it’s easier to accept and brush off what other people think.

M: Oh there is definitely the absurd “get out there and graft lads” VS “oh groan your band are playing another festival AGAAAAAIN” balancing act that any moderately successful act has to deal with. I’m sure these same people approach commuters on public transport and say “What you’re going to work AGAIN today? Have you not paid all the bills and eaten all the food by now????” The correlation between art and personal day-to-day survival is real and it is vital. But I don’t think your average internet human bothers with that level of insight when making shallow observations for likes on Twitter. For a young band or artist, the perception can be kinder. It’s fresh, it’s sparky, it’s clean and shiny. Hang on to that feeling and spirit as your career progresses and enjoy it because it really, REALLY is fun. I mean that.

SelfMade will host their event, Mind YourSelf: Mental Health and Music, at The Tara Building this Saturday, May 25. More details and ticket information available here. 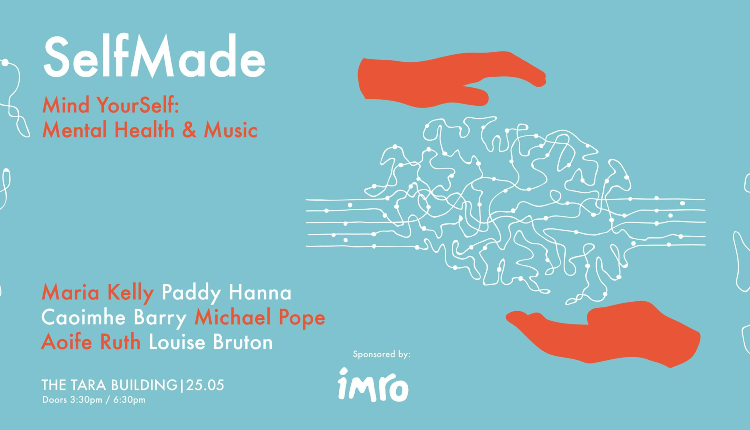 Marc Taverner: My Son is 16 and Wants to Colonise Mars