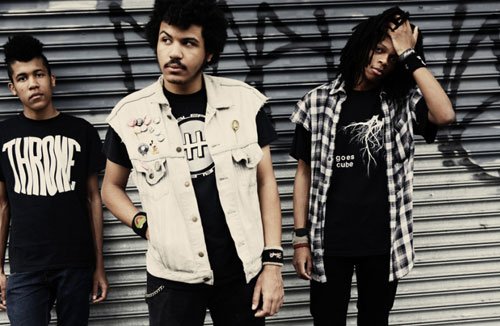 MCD presents Radkey, a punk-rock group from ST. Joseph Missouri who are playing the Academy 26 June 2014.

Radkey’s Eps include Devil Fruit and Cat & Mouse, both of which you can catch live at their Dublin show and purchase on iTunes.

If I had to sum up their music in one word… That word would be ‘thrill.’ This trio, all of whom are brothers, are the best thing I’ve heard to come out of the punk rock scene since Misfits and The Distillers. Their voices are multidimensional and have that haunting depth of tones sang in a beautifully low, dropped key. Radkey bring back the romance, fun and energy in punk music that today is largely lacking.

They aren’t concerned with creating an empty image, using shock tactics or people pleasing; they have something naturally likeable about them that fits effortlessly. Every track is a track you’ll want to keep on repeat and lose your mind to. Their music brought a smile to my face and a surge of energy in my tummy that is a MUST when I listen to punk rock.

So if you’re a punk veteran and crave that early punk sound and miss the soul that used to exist in music then you need to come to the Academy and see these guys.

I was lucky enough to grab and interview with Radkey and I found out that they were even more awesome that I thought:

1) I read that you’re into learning how to speak Japanese and like anime movies, if each one of you could be an anime character for a day? Who would you be?

– I would Sanji. Dee would Zoro, Sol would be Kamina.

2) Who are your greatest influences in punk rock?

– Ramones, The Misfits and Green Day.

3) What’s the creative process when you guys make your music?

– It goes a ton of ways. Sometimes I’ll have a melody or Dee will have a riff. Pretty much every way.

4) What musical legend would you most like to play a guitar solo with?

5) Where is your favourite place to gig?

– That’s actually something we can’t really say. We love so many places.

6) What can people expect from going to your gigs?

– Expect it to be really loud and fun as hell.

7) What’s been your best experiences touring?

– Touring the west coast for the first time with Black Joe Lewis was pretty amazing. And our first headlining tour of the U.K.

8) What’s the most played track on your iPods?

9) What do you think of the punk rock scene today?

– I can’t really judge as I haven’t really seen all of it. But I do know whatever there is could be a lot stronger.

10) Is there anything you’d like to say about why everybody should listen to your new album?

– Because it’ll blow your mind. We’re really really going for it on this one. We’re stoked for everyone to hear it.

The Happiest of All Memorial Days by Acollective. (An excited unreview)

Even Crayfish Get Anxious!