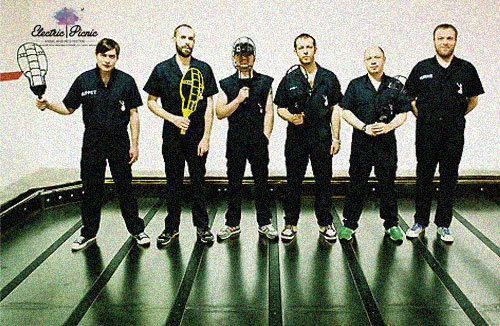 It’s hard to believe that Mogwai have been on the go for the guts of 20 years. Having formed in 1995 and they released their first album Mogwai Young Team in 1997 amid the hype and glory of the all conquering brit-pop. But the Glasgow natives did not conform to the local chart topping sound that was earning the likes of Blur, Suede, Supergrass and Oasis widespread success. Rather Mogwai employed few lyrics and instead focused on a heavy guitar driven, instrumental sound that earned them many plaudits amongst the hipsters of the underground indie scene and actually charted somewhat well with their first album and their follow up, Come On Die Young, released in 1999.

As they progressed towards their third album Rock Action, released in 2001, they developed the unique sound now solely associated with Mogwai; a stunning blend of deafening guitars mixed with beautiful piano driven harmonies all melded into a veritable Berlin Wall of sound. Of all the bands associated with the emerging genre of post-rock Mogwai were amongst the most well-known and their sound often echoed in the music of many of the emerging post-rock bands of the last 10 years including Explosions in the Sky, The Redneck Manifesto and Crippled Black Phoenix (who, incidentally, share a bassist with Mogwai).

Two more albums followed, Happy Songs for Happy People in 2003 and Mr. Beast in 2006 which further cemented Mogwai as one of the leading proponents of intelligent instrumental compositions laced with mood and texture and now employing more electronic elements. Naturally this sound made them ripe for soundtracking and in 2006 they worked on the score to Darren Aronofsky’s The Fountain with composer Clint Mansell and the Kronos Quartet, the result being one of the richest soundtracks of the last ten years. The same year they scored the music for Douglas Gordon’s Zidane: A 21ST Century Portrait which they released as an album the same year and reportedly were given free reign with the style and choice of music just “as long as it was hypnotic”. 2013 saw them compose the entire soundtrack to the brooding French TV drama, The Returned. The haunting tones and subtle nuances of the show seemed an ideal fit for the Scottish instrumentalists with the soundtrack picking up as much acclaim as the TV show did itself.

Two more albums followed in 2007 (The Hawk is Howling) and 2011 (Hardcore Will Never Die, But You Will) to more critical acclaim and now Mogwai bring their sound to the stages of Electric Picnic as they tour the release of this year’s Rave Tapes¸ the band’s eighth studio album.

This will be their third time playing the Stradbally festival and those unlucky enough to have missed them before should make a note of the where and the when on the festival line-up, eke out a patch of grass front and centre, and prepare to be blown away and soothed in equal parts by the dynamic hymnal loops of distorted guitars and poignant haunting piano arrangements of a band who have refined their sound to near perfection.