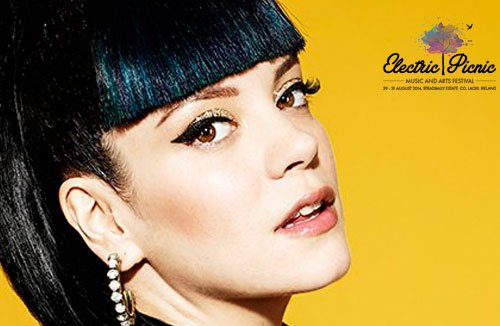 Love or hate her (or love her in secret and hate her in public), when Lily Allen hits the Electric Picnic stage at the end of August she will undoubtedly put on a good show.

After a 4 year hiatus, Allen released her new album Sheezus this year. Although it debuted at number 1 in the UK charts, it hasn’t been doing as well as she hoped. She blames this on a number of factors – from crazy baby hormones to working with music industry types who have stifled her creative process. But she hasn’t let that stop her from a gruelling tour schedule. As well as her own shows and the summer festival circuit, Allen was called in at the last minute to replace Two Door Cinema Club at July’s Latitude Festival. By all accounts she gave a cracking performance, even throwing in a TDCC song. She also appeared as Miley Cyrus’s opening act during the younger performer’s US Bangerz tour.

Allen is undoubtedly and unashamedly pop. But she’s also breathtakingly honest. She delivers a solid kick to the nuts of the misogynistic music mill. In an industry where sex and stupidity sell, she’s not afraid to criticise everyone from exes to the very people she’s working for. But although she pulls no punches, she never does it at the expense of the tunes. There aren’t many artists who can pen a feminist ditty that’s as sing-alongable as “Hard Out Here” or make such a fun song about an inconsiderate lover like 2008’s “Not Fair”. Her lyrics could never be accused of being subtle (“Oh my God you must be joking me/ If you think that you’ll be poking me”), but in many ways she’s speaking of the real experiences of young women today. She deals frankly with bad sex, getting drunk, and living up to a celebrity lifestyle, while her latest album talks about body-shaming, having babies and the joys of a nice home and husband.

It is this frankness, however, that draws her fiercest criticisms. Dissenters say that she’s not outspoken, just crass. Others doubt her sincerity, pointing out her privileged childhood and her ‘fake glottal stops’. But if it is all an act it’s a very apt one: many heterosexual white women will identify with the trajectory of going from nightclubber to hubby cuddler.

As for her own privilege, Allen admits she likes her country home and being able to spend £200 on make-up at Selfridges. She makes music because she likes a certain lifestyle and has to pay the bills. But she’s also upfront about not making much money off of albums – there’s more money to be made by turning up to red carpet events. It’s all part of life as a music-maker.

The pop world is populated with air-brushed airheads, with more costume changes than style. Lily Allen may not be the most talented musician but she’s a great pop star. In the barren landscape that passes for pop these days, it’ll be interesting to see what she does next.