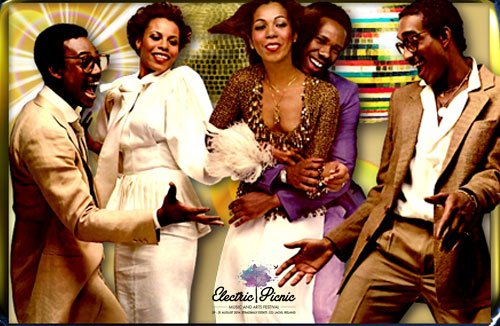 Forget everything you think you know about disco. Sure, we all like to have a little embarrassing dance when ‘Stayin Alive’, ‘Dancing Queen’ and ‘Kung Fu Fighting’ come on. But disco was first and foremost a counter-culture movement. In the 1960s, underground disco clubs in New York were popular with marginalised groups, providing a safe space for Blacks, Latinos, Women and Queers* to dance their butts off.

It was in this setting that two talented session musicians teamed up to make Chic. In 1977, disco was starting to become mainstream and guitarist Nile Rodgers and bassist Bernard Edwards decided to bring their distinctive rock & roll sound to the scene. With their killer bass lines and frequent calls to ‘dance!’ their songs quickly became popular, filling dance floors around the world. The sparse lyrics let the music do the talking. Edwards’ bass line from ‘Good Times’ is one of the most famous bass lines around (you might know it from Sugarhill Gang’s ‘Rapper’s Delight’ and Queen’s ‘Another One Bites the Dust’).

Pumping out track after winning track, the duo considered themselves “an inexhaustible hit machine”. They made massive hits like ‘Le Freak’, ‘Everybody Dance’, ‘Good Times’ and ‘Forbidden Lover’, as well as penning popular tracks for Sister Sledge and Diana Ross. They were committed to making good songs with ‘deep hidden meanings’ – ‘Le Freak’ is famously a big fuck you to a bouncer, so perhaps ‘deep’ is relative. They were also superb professionals and primarily concerned themselves with entertaining the audience – something some modern acts might do well to remember (I’m looking at you, Lana Del Rey).

After disco’s popularity waned in the late 1970s, both Rodgers and Edwards forged successful careers as producers and songwriters. Rodgers has produced and written for every major act of the past few decades. He’s worked with everyone: Madonna, Inxs, Blondie, Diana Ross, David Bowie. Most recently, he performed in 3 tracks on Daft Punk’s Random Access Memories, including co-writing the summer anthem ‘Get Lucky’. The man has his fingers in every pie around. Edwards had a similarly successful career, producing Robert Palmer’s ‘Addicted to Love’ and working with Rod Stewart, Adam Ant and Duran Duran.

Although they weren’t making any records of their own, they still found time to perform and tour as Chic during the 1980s and 90s. It was while on tour in Japan in 1996 that Edwards suddenly fell ill. He finished the gig, went back to his hotel and was found dead the next day. An autopsy revealed that he’d died of pneumonia. He was only 43.

The band now tours as “Chic featuring Nile Rodgers”. At their gig last year at the Sydney Opera House, Rodgers warned his audience that they’d be playing songs by other bands. “When you hear us play a song tonight by Madonna, I don’t want you to act all funny and think that we’re a covers band… There is a reason why we are playing all this music… it’s all our music. We are all brothers and sisters in this together. These are all records that I helped produce in the first place.”

In many ways, they do feel like a covers band, because you know just about every song that they play. This is a band that was formed in a counter-culture and ended up defining the sound of a generation. Whether they’re making their own music or producing other people’s they continue to be a massive influence in popular music. I dare you to see Chic at Electric Picnic and not dance, dance, dance (yowsah, yowsah, yowsah).